OK, I've got more thrift goodness for you, but I'm trying to type with a band-aid on my finger, so I'm going to let the pictures speak for themselves for the most part. Also, I really don't feel like typing out a million titles of 45s again. I'm tired and you probably don't care anyway.

Friday night I stopped in to one of the few small charitable thrifts left. I happened to be in the area and they happened to be open. One of the nice things about thrifts like this is they often cut you a deal as I got all this goodness for $15. I didn't even ask! 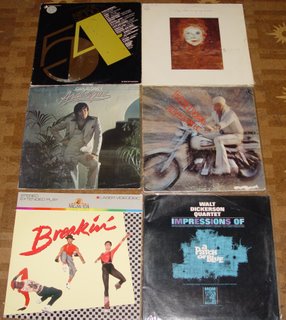 So, the Night at Studio 54 album I grabbed strictly because they had a buy one, get one free deal and I didn't have a copy of this album. It's pretty much "I Will Survive" and "We Are Family" away from being any modern disco comp you might care to find. In other words, it's all bog standard mainstream stuff that the real Studio 54 would have been too hip to play.

The Dory Previn I know nothing about, John Klemmer I snagged for a reason I can't remember, the Wayne Cochran seemed like a safe bet and how could I not pick up Breakin' on laserdisc?

The Walt Dickerson set off my spider senses and when I flipped it over, I realized why. Buried in the liner notes was mention that Sun Ra was the keyboardist on this album. I haven't the foggiest idea where I picked up that kernel of knowledge, but I'm glad I remembered something was special about this album. 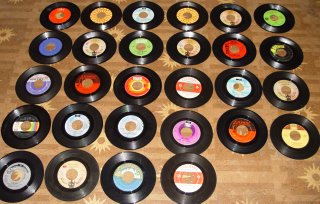 However, it wasn't just LPs and laserdiscs. Weird thing, I've been on this bubblegum kick lately (it's cyclical, happens about once every 2 years) and what shoudl I find but a nice batch of bubblegum 45s. Many of these are almost played to death, but I was just grabbing stuff, condition be damned! There's also a few light soul records in there. I never knew the Four Tops covered "Walk Away Rene."

Interestingly, there seemed to be two collections making up the bulk of the 45s I found. One had ID numbers stickered to the labels (fairly common for 45s) and the other someone had scratched DAVES in the run off wax. Both those people seemed to have good taste, so I just looked for their records and bought them. 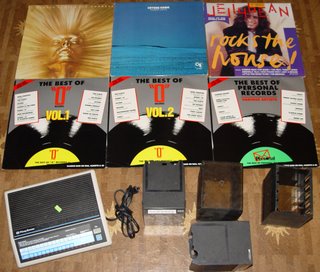 Today's haul was even cheaper and bulkier at the least. The Ramsey Lewis album is from when he was funky, Hubert Laws on CTI is good and the Jellybean comp I bought strictly for his version of the B-Boy classic "The Mexican" (it's actually very good.)

The other collections, the Best of O Records and the Best of Personal Records are collections from the same company that compiled Enjoy and a ton of other labels. I really have no idea if I'll ever listen to these, but there they are.

In this picture, we also have a postal scale and these weird 8-track storage cubes. I can't figure these things out as they leave the back part of the tape exposed. It almost looks like these were part of a console stereo or something. Timely though, as I needed a better way to store all the tapes from my big 8-track score. 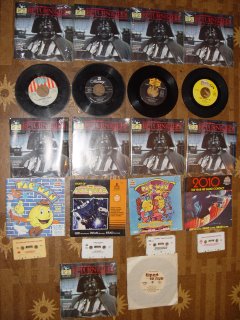 There's the last of today's haul (which I snagged for less than $8, btw.) Let's get the obvious out of the way first. Yes, I bought nine sealed copies of the Return of the Jedi book and record. (For those of you too young to know what a book and record was, it was a story book, loaded with pictures, and a record that would read the story too you. Great for learning how to read. "You will know it is time to turn the page when R2-D2 says...")

I also lowered my standards and dipped a toe in the book and tape pool. See, that was the big thing that seperated me and my sister. I was book and record, she was book and tape. Kids and their technology. I tell you.

The first one I found was 2010 which has completely altered my perception of reality. I'm sure there are canidates for weirder cross licensing for the book and record/tape thing, but this has got to be up there. I also couldn't pass up the Pac-Man and Asteroids sets. Amazingly, I found the tapes for all the books, as everything had been dumped in together.

The 45s are some garage rock, some old R&B and I don't even know what. I would like to point out the last record, a promo record for the film Time To Run. Apparently this was a Billy Graham joint, though it had some real actors in it as well. I thought I had something cool, maybe I do, but I have to admit, my enthusasm for that one is a little lower since visiting IMDB.
at 10:35 PM