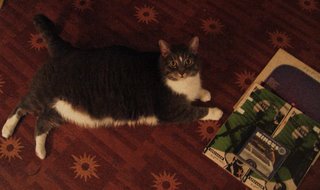 (My faithful assistant Bud assists with the assessment of the day's haul.)

There are few things, in my world anyway, better than a good thrift score. One of those things is tearing through some back country roads in a vintage Corvette on a beautiful afternoon when you're supposed to be at work. So, considering I got to do that* and got another stack of vinyl to throw in the collection, damn right it was a good day.

The bulk of today's loot wasn't thrifted, but it comes from a store where most of the records are priced in thrift range (99 cents.) I have a couple of buck 99s in there and a $7.99. 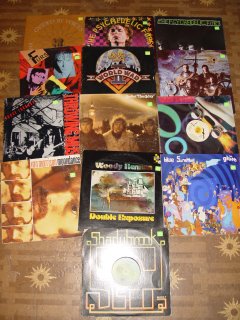 Here's what you're looking at, top to bottom:
Guided By Voices - Universal Truths and Cycles (sealed, this was the $7.99 one.)
Psychedelic Furs - Mirror Moves (I may have a copy of this already. I can't remember.)
Psychedelic Furs - S/T (Don't see this one too often.)
Psychedelic Furs - Forever Now
All This And World War II Soundtrack (Still desperately seeking a DVD of this film.)
XTC - Black Sea
Throwing Muses - House Tornado
Sweet Thursday - S/T (A gamble here. I know nothing about this one except Nicky Hopkins plays on it and he was some stones and ex-Beatles stuff.)
Redd Hott - Redd Hott #1 (Another gamble. Pretty cool late disco era 12" cover though.)
Van Morrison - Moondance (I'm ashamed to admit I didn't own a copy of this. A reissue, but it was 99 cents.)
Woody Herman - Double Exposure (A copy of his Chess sides. Woody doing "Sex Machine?" Sign me up!)
The Glove - Blue Sunshine
Delegation - Oh Honey/The Promise of Love/Soul Trippin' 12" (I'm such a sucker for disco 12" singles.)

Apparently someone had dropped a load of new wave stuff and I was batting clean up. Oh well, snooze you lose. I also got a DVD of Grave of the Vampire. Total for this run was $27 and some change. 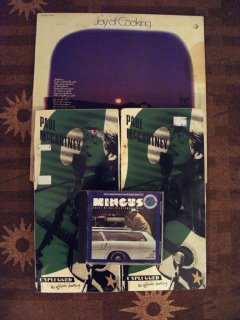 OK, this batch came from a real thrift store and what we have here is:

Joy of Cooking - S/T (Probably some hippy shit, but for some reason it rang a bell in my head.)
Charles Mingus - Shoes of the Fisherman's Wife (Which I know has been remasterd or something, but I didn't own it so whatever.)
and two copies of Paul McCartney Unplugged.

I case you didn't notice, those McCartneys are sealed in the longbox. Finding stuff like that always makes me scratch my head. How the heck did two copies of this CD survive from 1991 unopened? They're not cut outs. They don't even appear to have been from the same store originally, if you go by what's left of the original price tags. Crazy man.

I thought those things were out of print and was looking forward to being an eBay millionare finally. Well, it's not out of print, but I guess having the longboxes might appeal to someone.


* Note to co-workers or anyone else who may be alarmed at the thought I was playing hooky today: I honestly was helping my pops out after his surgery. See, he's been laid up for months and hasn't been able to drive. The thing about old cars is, you gotta run 'em every so often and he hasn't been able to. So, after I got him set up in a comfortable chair, got his cast fixed and got him something to eat, he told me to take the 'Vette out of mothballs and run it for a while. Who was I to argue?
at 9:20 PM