Alright, after all the taunting of folks looking at blogs just for the purpose of downloading music, I'm going to dip my toe in the exciting world of vinyl sharity!!!! WHOO HOO!!! CAN I SIT AT THE GROWNUP'S TABLE NOW MOM???

However, you're gonna have to suffer through yet another edition of THRIFT SCORE. This one is THRIFT SCORE WITH SHARITY though. It's better than fireworks with report or massage with release. (Well, maybe not better than the last one.) 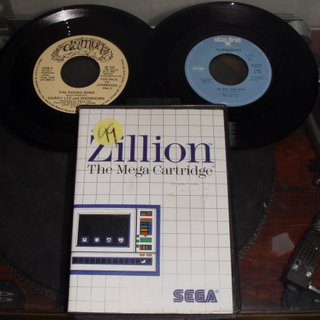 I had a small haul at my first stop, for reasons I'll graphically explain in a moment. However, there is one thing I really want to know. I don't get why I find a cache of CED Videodiscs from time to time but never ever ever a player? I mean, I know why I find them in the thrifts here. This is Indianapolis, home of the CED project. Hell, I knew folks growing up who worked on the damn things. Still, it seems the discs themselves have survived better than the players as discs aren't hard to come by but players are rare as hen's teeth.

(See, I feel it is my duty to own every format of dead media in existence. Since I got the laserdisc thing going on earlier this year, CED is my next mission. Elcassette, watch your back, yo.)

(My fiancee is rolling her eyes if she's reading this.)

How did I acquire this as I child? I swear to god, I taped it off Q95. I don't remember if it was bleeped, but I'm almost positive it wasn't. I find it hard to believe as a seven year old in a non-cursing family I could have filled in all those blanks on my own, though I still remember the lyrics curse for curse.

You'll notice the label says "FOR SALE TO JUKEBOXES ONLY". Guess I lucked out that the lady who rang me up wasn't paying too close attention to notice that I was, in fact, not a jukebox. There was no way I should be denied such exquisite filth.

Speaking of jukeboxes, the double sided greatness that is the Raspberries Go All The Way/Tonight is going to sound sweeeeeet coming out of that thing. Oh, if I haven't rubbed it in your face yet this post, I'm part owner of a jukebox. So neeyah!

Finally, we have Trillions for Sega Master System. Ahh, what an under rated piece of gaming technology ye be, SMS. I still wish I hadn't had to sell the oh so cool Sega 3D goggles and games, but it was that or kitty medical bills, so I'm back to plain old 2D Master System goodness. (True story, BTW.)

Speaking of medical things, I have a serious medical condition. It's rather embarrassing, but I think I've finally found the courage to talk about it, so that others may realize they are not alone.

It's called TSBS, Thrift Store Bowel Syndrome. The causes of TSBS are being in any location where under no circumstances you would want to sit on the toilet. Yet it is always these places where your digestive tract decides the time is right to do a complete lower GI flush.

Now, TSBS is not exclusive to thrift stores. Record stores, dive bars and ancient Marathon filling stations are all potential locations for a TSBS attack. The only remedy for a bout of TSBS is to seek a clean restroom immediately. Unfortunately, there is no known cure.

Ok, I'm sure by now you're thinking "shut up about your poop and give me the tunes!!!" Well, you're going to have to wait it out a little longer because after I started this entry, my lovely fiancee invited me to dinner with some friends of ours. On the way home, I hit up another thrift.

Wow. This is the kind of thing that makes you glad you turned off the gas on the stove before you went to bed... 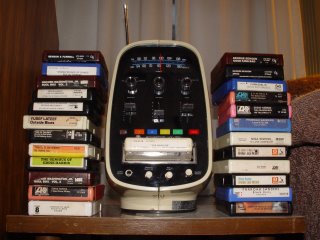 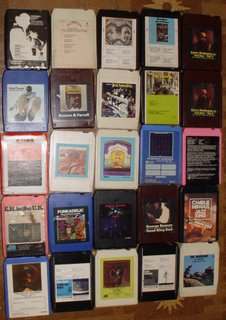 (Aquatron shown for display purposes only. I wish I could claim that as a thrifted catch, but alas it came from a trendy antiques store.)

Let me tell you something about coincidence. A conicidence is when you finally see the 8-track movie So Wrong They're Right two days before you have what is the greatest 8-track score you've had in years and maybe in your entire life. Funny how no matter how many times I watch Brewster's Millions, I never find out some rich relative has willed me a ton of money a few days later. Oh well, you take what you can, I guess.

Anyway, someone really liked them some soul jazz. Eddie Harris in particular is well represented in this collection. Let's have a quick run down, shall we?

Cannonball Adderley - Sould of the Bible. Tape 2 only, but whatever.
Yusef Lateef - Outside Blues.
Eddie Harris & Les McCann - Second Movement. Good stuff, this.
Eddie Harris - Live At Newport.
Grover Washington Jr. - Soul Box Vol.2. I thought I was getting 1 & 2 but I got two 2s. Go fig.
Rufas Thomas - Crown Prince of Dance.
George Benson & Joe Farrell - Benson & Farrell
The Purple Fox - Tribute to Jimi Hendrix. This one is kinda famous. IIRC it was featured in the 365 Days project.
The Genious of Eddie Harris. Yes, that's the title. "Genious". Did someone say truck stop pirate?
Grover again.
Eddie Harris - Exodus to Jazz.
Eddie Harris - I Need Some Money.
Nina Simone - To Love Somebody.
Pharoah Sanders - Love In Us All.
Eddie Harris - The Reason Why I'm Talking S--t. Give it up. The man had a way with album titles.
Eddie Harris - E.H. in the U.K.
Funkadelic - Talkes of Kidd Funkadelic.
George Benson - Space.
George Benson - Good King Bad.
Charles Mingus Jazz King. I haven't a clue what this could be.
Pharoah Sanders - Black Unity.
Brother Jack McDuff - Moon Rappin'. I've had the sleeve for this for years. Now I finally get to hear it.
Billy Cobham - Total Eclipse.
Brother Jack McDuff - To Seek A New House.
Ipi 'n Tombia featuring Margaret Singana - The Warrior. I haven't the slightest what this could be other than it's on Stax and from 1974.

Alright, enough of this crazyness. I still have Free Zone mail to open.

Here's your sharity. Because I would never in a million years play this track on my radio show, even if I'm sure I originally taped it off Q95, here is The Rodeo Song in all it's filthy glory. Enjoy.