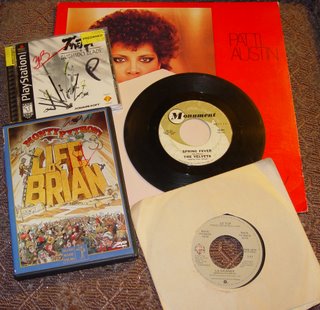 I didn't arrage my picture as neatly as I usually do, so I'll have to assume you can differentiate a PlayStation game from an LP.

Speaking of PlayStation games, there's Bushido Blade, the samurai game from Squaresoft. Ironically, just earlier this evening I was talking about how I never fire up the PlayStation any more. Here's one more game to collect dust.

In the background, Patti Austin's Body Language, a late in the day CTI release. I have very low expectations for this one, but I'm committed to collecting every CTI release I can find because I luv CTI so much. (BTW, I really need a copy of Dave Matthews' Dune LP. Anyone got a double they can spare me?)

On the 45 front, I know nothing about the Velvets except Roy Orbison wrote the side facing the camera. I do know La Grange and Tush is a winning combination that is going to kill in the jukebox. I also know I would have rather found the Criterion Life of Brian DVD than the old Anchor Bay edition, but for $1.81, I'll take it.

Saddly, I had to pass on a Sixto Rodriguez 45 because the damn thing had a nasty crack in it. Really broke my heart.
at 9:27 PM