Luck has an interesting way of factoring into life sometimes. For me, that occasionally manifests itself in thrifting. Granted, I'll go through long dry spells when I don't find anything interesting, but then I'll hit a patch where things that have entered my mind recently magically show up.

OK. I don't really believe any of that crap. If I do have summoning power, I wish someone would tell me how to fine tune it a little better.

If you've been following the story so far, I'm searching for a CED videodisc player, a creature I still haven't seen in all my years of thrifting despite often times finding discs. Why? Well, I got a few movies I want to play. That and it's a piece of vintage technology I've always wanted to own. I'm crazy like that.

Well, stop number one and what do I find? 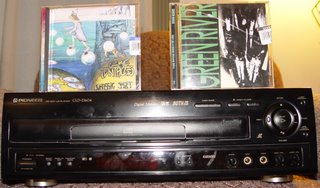 Ahahaha! So close and yet so far. Now, I'm not complaining as this new laserdisc player is a much better player than the one I own. (It's a Laseractive, which gives me "I've got an obscure videogame console you'll probably never own" bragging rights, but it's actually a pretty mediocre movie player.) No remote, of course, but it appears to be working fine.

I don't know which of those CDs is more embarassing, the hippy jam fusion of Ozric Tentacles or the proto-grunge of Green River.

For my second stop, I actually found a few items, but I didn't feel like waiting in line to check out. Nothing too exciting, a late 70s McCoy Tyner LP and Neil Diamond's Silo album. Wasn't really worth the time. I'm a busy man, you know.

To represent this thrifting stop, I'd like to share with you one of the images returned on a Google search for "this space intentionally left blank."

Stop three (hey, said I was I busy man) netted me a few more odds and ends. 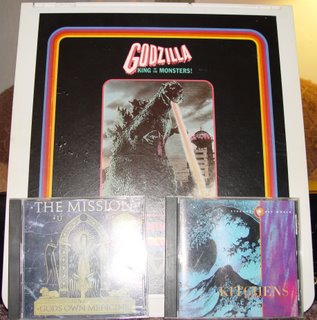 Well, it's not like I haven't seen the original Godzilla a million times. I guess this purchase was like all the 8-tracks I own of favorite albums. Something cool about owning a beloved movie in a clunky obscure format like this, even if I can't play the damn thing.

On the CD side, I can't remember if I like the Mission UK or not and I've now finished my Kitchens of Disctincion collection, except the rarities disc that comes with the greatest hits album. Whoopie!
at 9:45 PM