I know you all have been fiending for some more sweet sweet thrift scores, so let's do this thing.

First off, Friday night I went to Art vs. Art. Fun times there. However, I found myself with a little time to kill before the event and, coincidentally, I was parked in front of the same thrift that I'd had the big 8-track score at the day before. Coincidence, or was it?

Normally, I'd never return to a thrift the day after I'd been there, but I really was killing time and I hadn't investigated the vinyl, so whatever. As luck would have it, I found a few things... 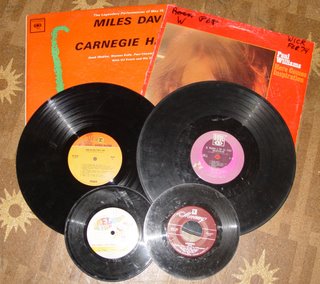 First off Miles Davis at Carnegie Hall. It's an OG mono copy, and I didn't own it. Not in the best of shape, but I'll take it. Next is a white label copy of Paul Williams' Here Comes Inspiration, an album I'm 99% sure I alreay own. Paul Williams is another of a long list of guilty pleasures for me. This copy is intersting though due to the huge "PROMOTION NOT FOR SALE" die cut into the cover and the fact that it came from my home base, WICR! W00T!

Then we have proof that I must be lowering my thrifting standards as back in the day I'd never snag an LP without a cover. Well, Jr. Walker and the All Stars, I actually have a cover for somewhere in this mess. The record isn't too pretty, but I'll suffer through with it. The copy of God Bless Tiny Tim next to it is in suprisingly good shape and really bums me out that it has no cover.

The 7" selections fare a little worse. Adding to my growing organ demonstration record collection is an example from Conn called Prelude is Fun. At least, I think that's what's going on with it. It's on the other side of the palatial Captain Wrong estate and I've given the help the rest of the day off so no one can fetch this record for me at the moment.

Mordido is a Jazz at the Philharmonic thing. Back in the day before Verve records existed, Norman Grantz released all his stuff through Mercury, who put a lot of it out on 45. Saddly, this isn't on red vinyl like the other examples I own, but you take what you get.

On Saturday, I found out a little late Fall Creek sales were going on. In reality, those houses are too new for anything really interesting to show up at garage sales, but hope springs eternal, so garage sailing we went. It was a day of replicating my high school cassette collection on CD. 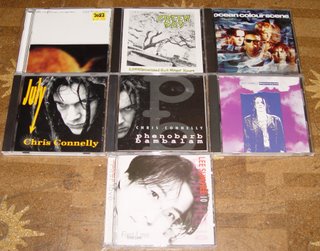 First stop happened to be at a friend's sale. I can't believe I never owned a copy of the Sunflower Conspiracy/Airiel Project split CD considering I was friends with all those folks, but I got one now. Then there was Green Day 1,039/Smoothed Out blah blah blah from back when they weren't writing rock operas and I was too dumb to realize their schtick wasn't that great to begin with. As it turns out, I actually owned the other Lookout album back in the day (the one with "Dominated Love Slave" on it) but this will still probably be a nostalgic listen and then go on the shelf forever. The first Ocean Colour Scene album was a just for the hell of it pick up.

Next is another weird coincidence as I was thinking just the other day about how I wouldn't mind hearing Phenobarb Bambalam again. Then, out of the blue, it's damn near Chris Connelly's entire Wax Trax catalog. I'm soo looking forward to reliving my depressed teenage years again! Huzzah.

Oh, the last CD...I've got no idea. Shannon was adamant I take it, that it was cheesy stuff and on and on. We'll see... 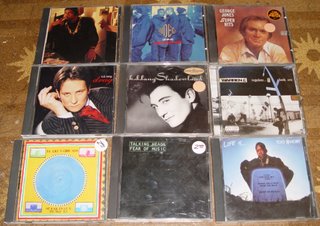 Now this batch is a weird mix of what I was listening to in high school and some country stuff picked from a very interesting batch of discs. Let's put it this way, this was one of the more campy garage sales I'd been to in a while. While my fiancee debated on picking up a Heywood Wakefield dinette set, I sifted through a box of Judy, Liza, Babs, Bette and Lee Greenwood to find this batch.

Fishbone's Reality of My Surroundings wasn't my favorite of their albums, but it's good enough to be worth replacing a worn out cassette. I still love Jodeci and I'm not ashamed to admit it, so finding Forever My Lady was nice. The George Jones disc is nice, but it's one of those really lightweight discs. Ten songs, well under a half hour, I'm sure.

My friend Tony recently introduced me to k.d. lang, so here's a couple of her discs, Drag and Shadowland. Then Warren G with the G-Funk/yacht rock classic Regulate. IIRC, this is a classic one good track album. Or was that Domino's album?

Wrapping up, here's a couple CDs of stuff I have on vinly, the Talking Heads Remain in Light and Fear of Music and Life Is...Too $hort, which I just realized is the clean version. Damnit, I hate it when they don't make it easy to know what you got. I mean, it was a dollar, and I still have the dirty version on LP, but I'd prefer the dirty version, even if this does come from the time when rappers actually wrote different clean versions instead of just editing out the cuss words.