Review: The World the Flesh and the Devil (WTF-film) 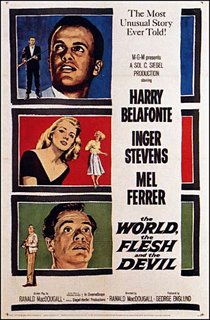 Ralph Burton gets trapped in a coal mine and when he manages to escape five days later, he discovers he is apparently the only living creature left. A radioactive dust has seemed to have wiped out all other life on Earth.

He drives up to New York hoping to find other survivors and, after a lengthy time isolated, comes in contact with Sarah Crandall, who has been keeping an eye on him for a while. Their relationship is tense and awkward from almost the beginning. Sarah can't decide weather to rip his clothes off or run away screaming and Ralph seems more interested in trying to single handedly rebuild civilization than anything more than companionship.

The situation is exasperated by the appearance of another man, Ben Thacker, who, after Ralph saves his life, quickly puts the moves on Sarah. This, of course, leads to a big showdown over Sarah and if I told you anymore, I'd have told you the entire film.

WFD starts out pretty strong. Nothing that hasn't been done a million times by now (the whole "Last Man on Earth" bit) but it looks like this is going to be an enjoyable enough film. Harry Belefonte is a suprisingly good actor and really puts in a good effort doing the whole alone on the planet/slowly losing mind/trying to hold on to some sort of normalcy thing.

Then we meet Sarah and what was a "Day After" survival film becomes girl really likes the guy/guy likes girl but won't show it kind of films. When Ben appears, the love triangle is complete and you can pretty much guess what happens.

The thing is, once Ralph and Sarah meet, there isn't much character development and that's a huge problem considering the film switches into an entirely character driven story. For example, I really don't understand the whole racial subtext between the two other than this was 1959 and interracial couples were pretty taboo. The scene where Ben lashes out at Sarah essentially about how they wouldn't be equals if they weren't pretty much the only two people on the Earth seems out of character for him and unprovoked by her.

I also tried really hard to find something good about Ben but just couldn't. From the moment he was able to get out of bed, it seemed like he was planning Ralph's demise and to have his way with Sarah regardless of how she felt about it. Considering the ending (which I won't spoil for you but I will say was a total cop-out ending,) the other characters must seem something redeeming in him. It's never revealed to the audience though.

It's a shame that this movie went the way it did. There's some beautiful cinematography and the music is excellent. Belafonte is promising, when he actually has a chance to develop his character. While I was still interested in the movie until the end, it was hard to walk away feeling anything less than dissapointed.

However, WTF-flim's DVD of this movie isn't dissapointing. The picture could be sharper (possibly sourced from video) but it still looks pretty good and the Cinemascope aspect ratio is preserved. There's also an isolated music soundtrack, so you can just listen to the score, and there's a photo gallery. I almost feel it should go without saying to those of you who have read my other WTF reviews, but the cover is nicely done as is the menu.

Still, it's hard for me to recommend this disc because the film kind of left me cold. If you are a fan of The World the Flesh and the Devil, and can't wait for TCM to run this one again (as apparently they show this from time to time,) I don't think you'll be dissapointed with this disc. For anyone else, I'd suggest keeping an eye on the cable guide before picking this one up.
at 6:38 PM