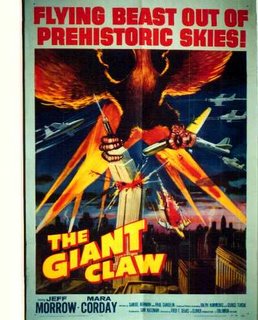 The Giant Claw is one of those movies I can't figure out why they never got around to featuring on Mystery Science Theater 3000. Pretty much from first frame to last this movie is nothing but cinematic cheese.

Here's my one sentence summary of the Giant Claw: The military, led by a know-it-all electrical engineer, defends model airplanes from a marionette buzzard and stock footage from Earth vs. the Flying Saucer. That's pretty much the whole enchlada right there.

I can't understand why Mitch MacAfee, the electrical engineer, is flying planes for the Air Force as a civilian or why he knows so much more about everything than anyone else in the movie. If this guy was so damn smart, why wasn't he in the military to begin with or why wasn't he an atomic physicist rather than being the guy to waltz in and tell the military's top atomic guy where he'd gotten it all wrong?

The military in this movie is of the "shoot first, ask questions never" persuasion so there's little attention given to what this bird is or why it's here. Well, there is one scene in the middle of the movie that grinds everything to a complete halt that functions as the token "oh yeah, guess we better throw some motivation into the mix" explanation. Needless to say, the science is pretty laughable.

Speaking of laughable, check this mug out: 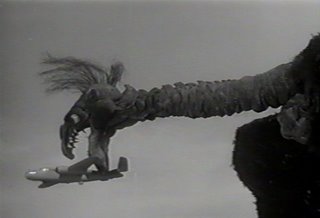 Yep, that's "The Giant Claw" in all it's mutant Muppet buzzard glory. This silly puppet is the only reason anyone cares about this film anymore. Everything else in this movie has been done a million times in nearly every Z-grade sci-fi film of the time, but the Claw stands out even among ridiculous movie monsters of the time.

Just when you start losing interest in the movie, the Claw attacks and your brain struggles to process what you're seeing. Nothing about these effects look convincing and the scene where the Claw picks up a Lionel train has to rank with the hubcap saucers from Plan 9 and the exploding rocketship on a stick in Robot Monster.

How I came to acquire two versions of this film on DVD can be explained by my habit of buying things in lots on eBay. Someone was selling a lot of CryptFlicks discs about a week before I bought a lot of WTF-films discs. I got the CryptFlicks lot cheap, so I didn't mind the fact that I ended up with a double dip and a few films that are out officially on DVD now.

Both of these discs appear to be sourced from video and I'm willing to guess it's the obscure Goodtimes release that serves as master. If you remember buying Goodtimes VHS tapes back in the day, you have an idea of what kind of quality to expect. The print is in good shape but the master looks to be a combination of slow recording speed and cheap tape.

Both of these discs have a solid encode, though WTF's transfer is sharper and has better blacks. The sharpness of WTF's disc emphasizes the video nature of the master, but overall I preferred this disc to CryptFlicks. They both look good though and you won't be disappointed with either.

I think CryptFlicks has an edge in the audio department, however. The audio on the master is slightly clipped and it sounds like WTF used some sort of noise reduction that left the dialogue a little muffled. CryptFlicks' version is a bit noisier, but when it comes to trading noise for high end, I'll always pick the noise unless it's too obtrusive.

Each of these discs have a unique quirk that is worth mentioning. Once in the viewing of WTF's disc I noticed a slight video roll (or whatever you call that line you get from a wrinkle in a videotape.) It's brief and doesn't effect much of the screen. CryptFlicks' disc cuts off just as the end title card is fading in. Neither of these flaws are deal breakers, but I just noticed them, so I thought I'd mention them.

Both of these discs come cased with art. CryptFlicks' case shows the movie poster on the front and has a brief synopsis and movie stills on the back, just like all their other releases I own. WTF's case is a little more abstract with just a cloudy sky and text. The info about the movie is cool, but I don't like this case as much as the others in their collection.

In addition, WTF's disc has silkcreened artwork while CryptFlicks' disc is silkscreened with just the name. Both discs have menus and chapter marks. CryptFlicks gives a chapter every five minutes while WTF chapters scenes. WTF also includes a trailer and image gallery.

While there's nothing wrong with CryptFlick's disc, I have to give WTF the edge. Although I prefer the clearer, if noisier, audio from CryptFlicks, the sharper image and extras make the WTF version of this film the one to own, at least until Sony (or whoever owns the Columbia Pictures catalog from the 50s these days) decides to finally put this one out officially.
at 8:41 AM