It's the most wonderful time of the year...

for shopping at dollar stores. Halloween is the bomb when it comes to cheap crap doled out in the dollar stores of America. I was wondering how this year was going to stack up to last's. Last year, Dollar Tree and the Family Value Collection presented us with a huge collection of horror DVDs, many of which contained exclusive versions of some seriously obscure stuff. Of course, there was also a lot of material shamelessly cribbed from other companies.

So far on the DVD side of things, I've seen a few stragglers from last year, but there's also about six double features making the rounds from a newcomer Allegro/Pop Flix. As far as titles go, there's absolutely nothing here you haven't seen a million times if you've been following the dollar DVD scene. However, I picked up a couple of these just to see how prints stacked up and whatnot. 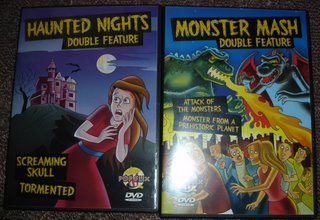 Ugly, aren't they? My fiancee remarked that it looks like they asked some Jr. High School art students if they wanted to earn a little extra credit designing DVD cases.

As for the visual quality, a spot check shows them to be better encodes than I've come to expect from non-flippers. For example, both movies on the Monster Mash disc also show up on Treeline single side discs, but these are encoded a lot better. You're not going to be showing off your TV with these, but at least in the clips I viewed it doesn't look like the image was created with colored tiles either.

I should also note that Screaming Skull is a fake widescreen which leads me to believe it was swiped from Elite's Drive-In discs. Just FYI.

Now, here's where things get interesting. I found all the rest of this junk at both Dollar Tree and Deals. Check these guys out... 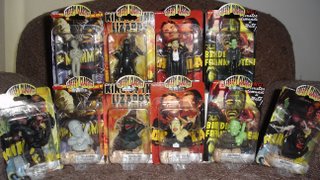 Click on the image for a larger version. Not shown, the Wolfman finger puppet. I still need to find a Wolfman figure to go with him.

What's interesting here is everyone is changed just enough to probably not be copyright infringing. Of course, it could also be that they're just made so poorly, they don't look like what they were intended to look like.

If you notice the back of the packaging, you get vintage movie posters with Bella and Boris and all that. Flip them over and there's a small version of the poster for your to cut out.

But it gets better... 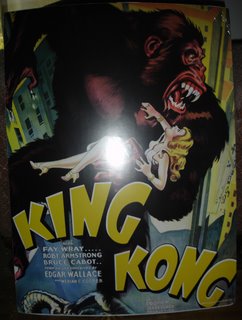 (Notice the bottom third of this poster is hacked off.) 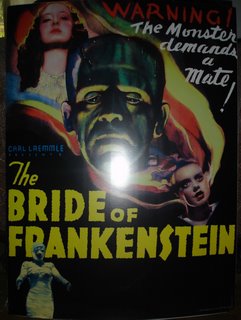 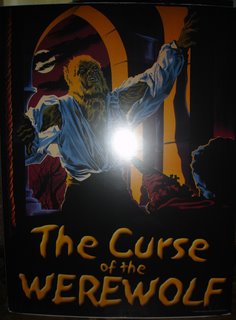 sorry these pictures suck, but what you're looking at are 28" x 21" posters! Are you kidding me? I about pissed myself when I saw these things. There's no way possible these could be kosher, is there? They even went to the trouble of cutting any reference to Lugosi or Karolff out, but left their dang mugs in there! 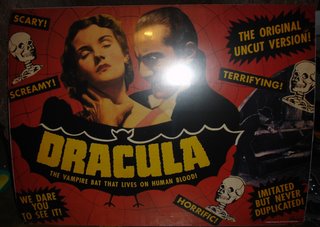 Notice the dollar store one has removed Bella's credit. Or how about this? 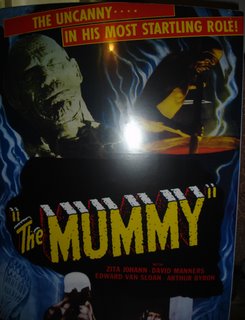 They cut out Karloff's name so the banner at the top makes no sense. Wow.

But here's my absolute favorite. 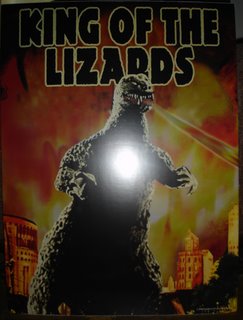 "No Toho, that is totally not Godzilla. See, Godzilla is King of the Monsters. Our guy is king of the lizards. Heck, look at our King of the Lizards finger puppet. He's swinging a club. Did Godzilla ever swing a club? No? Case closed."

Anyway, I hope some better horror DVDs start showing up, but even so, this bundle of swag is pretty neat. Expect to see these things on eBay for the next three months, but if you have a Deals or Dollar Tree in your area, you know what to do.
at 6:35 PM

"X One X Archives" had the figurines last year but boy, have they branched out this 'Ween round. They also have a line of Wizard Of Oz stuff featuring the MGM movie characters and actor's names, but titled "Yellow Brick Road". I wonder what loophole they're using with all this stuff.

And hey, I like those Allegro DVD covers, at least they're different!

They're different. I'll give you that. :)

Actually, my first thought was they reminded me of the covers for TurboGrafx 16 games. I don't know if you are familiar with those, but Jr. High art class is about the only way to describe them.