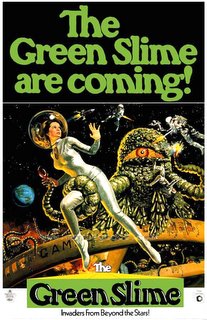 Protip: this is not a documentary about You Can't Do That on Television.

A giant asteroid is approaching the Earth and only Commander Jack Rankin (he of the Ronald Regan hair, permanent smirk and the thumbs-up) can save us. In order to do this, he will have to collaborate with his former partner Commander Vince Elliott (who is packing a lemon sucking face and the tendency to get people around him killed.) Rankin and Elliot previously had a falling out over some mission procedures and over the luscious Lisa Benson, who just so happens to be the head doctor on the space station they'll be using as base.

While planting explosives on the asteroid, the crew encounters a living slime that covers their equipment in the short time they are there. A researcher who has tagged along wants to take back a sample to study and when Rankin swats the specimen out of his hands, a small bit splashes up on his space suit. The decontamination process causes this unnoticed bit of slime to grow rapidly. On one part of the ship, everyone is celebrating the asteroids demise. On the other, creatures that feed on energy and grow rapidly are beginning to take over.

As you can guess, the next hour of the movie is spent trying to kill the creatures, which only seem to feed on being shot until about the second to last reel when shooting them magically works. We also have the unfolding subplot of what happened between Rankin and Elliot (it's never really explained, but apparently it had something to do with fatally putting several men in danger to rescue one) and, of course, the love triangle between the the Commanders and Dr. Benson runs it's awkward course.

Several people, including one of the main characters, die. Many of the silliest monsters not appearing in a Roger Corman film die. Unconvincing models do their thing. And the two people you know were going to live happily ever after do, I think.

It's kind of hard to believe The Green Slime was a 1968 film. Everything about this movie, short of the go-go 60's theme song and general vibe, could have come straight from an AIP flick ten years earlier. I've read somewhere this film was intended to be part of a series and kind of a tribute to old space serials like Rocky Jones, which would explain a lot.

The acting is stiff and there's no real likable characters. Rankin is an asshole, Elliot is a bit of a putz and Benson seems to be hedging her bets and playing both sides. Some of this may be due to the unusual circumstances under which The Green Slime was made. The back story of the movie is probably more interesting than the movie itself.

Apparently, this was the first Japanese-American movie collaboration, and, through writer Ivan Reiner, there's Italian influence as well. The film was shot entirely in Japan, in English, using all Caucasians and most of the extras came from the nearby US Air Force base. It may or may not be connected to an earlier series of Gamma 1 films. Similar sets and props are used, but the connection is never made clear.

MGM and Toei prepared different cuts of this movie for the US and Japan respectively. This wasn't uncommon at the time, and still isn't as rare as it should be today. The US cut is what I've been talking about so far. Japan got a shorter version of this film (basically all the love triangle stuff is pulled) with different, more serious music cues. This Japanese cut of the film is also the only version to appear on DVD to date. Prior to this WTF-film release, anyone wanting to see the US version of The Green Slime was left with either the pan and scan VHS or a DVD-R sourced from that tape.

What WTF has done is take the shorter Japanese cut of the film, edit the missing scenes back in and sync it to the US soundtrack. I was a little curious as to how this would work as the only version of the US film I knew of was badly cropped versus the original Cinemascope aspect ratio of the Japanese DVD. Well, WTF located an interesting compromise, an Italian broadcast print which is the same as the US version of the film but instead of being panned and scanned to 1.33, it's just cropped on the sides to about 1.78.

It's a lot less disorienting going from the 2.35 scenes to the 1.78 than it would be if the old US tape was used, but there's another catch with this solution. First off, the colors are over saturated and the whole thing has a video look to it. The other problem is, there's a bug on the lower left hand corner of screen with, I'm assuming, the TV station's logo.

Even with these flaws, I found the presentation to be much more enjoyable than watching the old US tape. Until an official disc is released, this is the best we're going to get. I know a lot of work was put into this version and I can't imagine going back to the tape after seeing this composite widescreen version.

However, WTF's disc doesn't stop there. How does two more versions of this film grab you? On the second disc, we get the Japanese cut and split between the two discs, the Italian version. Unfortunately, neither of these are subtitled. Since the Italian version seems to mirror the US version (I only noticed the end music changed,) this one is not that big of a deal. I can't really see anyone watching this one for more than curiosity's sake*.

I wish the Japanese cut had been subtitled, but it's still pretty easy to follow, so it's not that big a deal. It's nice to have it, to compare and contrast with the US version, but, considering it's pretty obvious when a scene was cut into the composite US version, it's almost unnecessary. Still, if you want to check out the different music, there it is.

There's also trailers and an image gallery. The cover is also good looking, though I'd have put the English title on the spine as that is the focus of this release. Still, it looks good on the shelf so I can't really complain.

For most people, this set is probably going to be a little bit of overkill. I know it was for me. However, I genuinely appreciate the completest nature of these releases from WTF-flim. Even though most people won't have too much need for the other cuts of this film, the composite US version is the only version you need until Sony (or whoever controls the MGM catalog these days) decides to give this one a proper release.

Like Commander Rankin, I give this set a hearty thumbs-up. 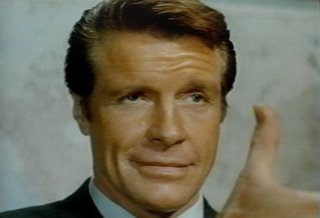 * In case you're wondering about why the flim was split over two discs rather than making this a three disc set, well, it seems as if this was broadcast in two parts as there's are "end of part one" and "beginning of part two" title cards clearly part of the broadcast. I really can't see anyone watching this, I think it was just included for completeness sake, so it's no loss either way.
at 8:58 AM