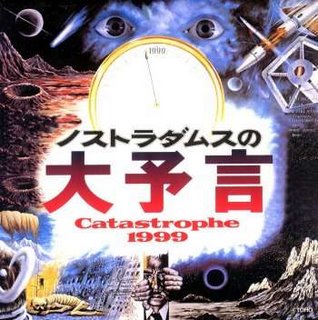 aka Nosutoradamusu no daiyogen, Catastrophe: 1999, Last Days of Planet Earth

Where to begin with this one?

In the film, we follow Dr. Nishiyama, an environmental scientist who has inherited a book of Nostradamus' writings, as he attempts to tell the Japanese government that pollution, the arms race and nuclear fallout are causing the prophecies to come true. First all the fish in the ocean die. Then giant slugs are discovered. Mutants are born to humans. SST jets explode in the sky. And on and on and on.

There really isn't much story to this movie. It's basically a series of one catastrophe after another designed to scare the viewer into a more Earth friendly way of living. There is some subplot involving Nishiyama's family, but it really serves as more of a breather from the waves of destruction than anything else. The ending isn't so much of an ending as it is an idealistic appeal for conservation and restraint.

This is one of those movies people either seem to really like or really hate. A lot of that seems to hinge on which cut of the movie you've seen (more on that later.) I've only seen the full Japanese cut and skimmed the other versions. Even though the full cut runs nearly two hours, it feels much shorter because there is just so much insanity happening. The pacing is really brisk and the viewer never has time to get bored.

I can excuse the fact that there isn't much story because that's really not the point. What little acting there is is well done. There's talent in this film, even if they mostly just have to react to the madness happening around them.

This film is really about showing scenes of death and destruction and to that end, it succeeds fantastically. The effects are very well done, for the most part, and there are a ton of them. It's obvious there was a lot of money put into this film. Contrast this one to Toho's Godzilla film of the year (Godzilla vs. MechaGodzilla) and you'll see what I mean.

And while there's not much story, this film has an abundance of atmosphere. There's a chilling beauty to it that's reflected in everything from the shots to the excellent Tomita score. It's the kind of movie that puts you in a mental place rather than putting you into a character's life and it's very effective in keeping you there once you're reeled in.

More people know about this film than have seen it because it was banned by Toho themselves. Shortly after hitting the theater, protests began over the film's portrial of the nuclear fallout afflicted natives in New Guinea and the post-nuclear war mutants. It was censored pretty heavily before Toho decided to pull the plug. An international cut of the film was released however (Catastrophe: 1999,) which had about twenty minutes of mostly dialog cut and an American TV version (Last Days of Planet Earth) was cut even further.

It's this American TV version that most people have seen. It was released on VHS and laserdisc and aside from an obscure Eurpoean tape of the international cut is the only home video version of the film avaliable outside the gray market. Late in the 90s, Toho tried to release Nosutoradamusu no daiyogen on video, but again, the protests were too great.

This Ultimate Edition of Prophecies of Nostradamus from WTF-flim has got to be the Criterion Collection edition of gray market releases. It's five DVDs long and includes four versions of the film. Discs one and two feature the uncut Japanese version. Disc three has a restored international cut. Disc four is a French version (no subtitles) and five is the Last Days of Planet Earth cut.

The reason Nosutoradamusu no daiyogen is split over two discs must be the wealth of alternate audio tracks including isolated sound track, a commentary track and an alternate audio drama CD reading. I wish the fidelity on the commentary was better. It's a little hard to hear on the bit I flipped over for. Also, the drama track is puzzling. I really don't know what it is and I wish that had been explained.

The reconstructed international cut was made using the audio from the Eurpoean tape and the video from the Japanese cut. Apparently the video on the tape was cropped so the Japanese footage was edited approporately and a new title sequence was created to mirror the correct one. I really appreciate the restoration notes included on this disc.

The French and US cuts seem to be pretty much as they were. Nothing special about them.

The video quality on Nosutoradamusu no daiyogen is much better than I expected. I know there's a version of this floating around but it's unsubtitled and has a timecode at the top, from what I understand. WTF's version is subtitled and does not have a timecode on it. The video is a little hazy and the colors are kind of washed out, but for a film this rare, this is still a great presentation.

The French cut is the roughest video on the set. While it is widescreen, it is cropped on the sides. It also has the blurry look of dubbed video. The US Last Days fares the best on the image quality but it's heavily panned and scanned. Also, a minor quibble here, with all the care put in on this set, it's a shame a laserdisc source wasn't used for Last Days. Granted, the VHS dub looks good, but I'm sure a laserdisc source would have been even better.

In addition to the commentary, soundtrack and drama CD audio, there are WTF’s usual image galleries featuring promo material for the film. There are also notes included on the restoration of Catastrophe: 1999 and the incorrect credits on the French cut. I really dig trivia like this and I hope WTF includes more information like this in their future releases.

I should also note that WTF offers a two disc set of just Nosutoradamusu no daiyogen for those not interested in doing the compare and contrast with the edited versions of the film. My feeling is, with a film this big and over the top, you need a DVD equally big and over the top to contain it. If you're interested enough to seek this obscurity out, you're likely to be interested enough to dig the alternate versions as well.

Short of Toho reversing their ban, which seems unlikely at this point. I'm confident in saying this will be the definitive version of Prophecies of Nostradamus on DVD. An overwhelming release of an overwhelming movie. I can’t say this is a film that will click with everyone, but if you like disaster films or Toho effect movies, you really need to check this set out.

Sidenote: While I was watching this, my fiancee called and asked me "What cha watching? Toho vs. Tokyo." The more I think about it, the more I think she may have nailed the essence of this movie without even knowing of it's existance.
at 9:35 AM