Review: Battle of the Dragons (WTF-film) 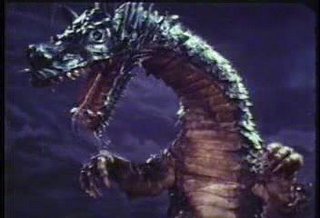 For most moviegoers, there isn't much in Battle of the Dragons' story they haven't seen before. A royal family is violently removed from power with only the young prince narrowly escaping. The prince then trains in seclusion with a wise old master. Just as the master is about to tell the prince the truth of his past, he is killed. The prince then heads out to seek revenge and reclaim his kingdom. Along the way, he falls in love with a young woman who, it turns out, is the estranged daughter of the evil wizard who made the overthrow of his family possible and who is planning a coup of his own.

While the plot may not win any awards for originality, the movie works well due to good acting and a snappy pace. The story is adequate, but I don't think it's really the main attraction of this film anyway.

See, you're never going to get bored because it's as if Toei decided to throw nearly everything that was hip and happening in Japanese cinema of the day (1966) in this one flick. Swordplay, ninjas, kaiju, magic. You name it, it's in there. With so much stuff going on, you might think Battle of the Dragons would be a mess, but somehow it all holds together nicely.

Some of the blue screen effects are dated and obvious, but for the most part the effects in this film are very good for the time. I really like the kaiju fight at the end. The monsters have a neat design and someone put some time and money in to the miniatures they are stomping though.

Unfortunately, this movie has kind of a reputation for being another cheesy Asian movie. I think this is due to the fact that like the Gamera movies, it was picked up by AIP for TV syndication and has only ever been available to US audiences as a dubbed, pan and scan shell of what it really is.

Contrasting this to the US TV version (which is out on a Retromedia disc with Return of the Giant Monsters) is almost like watching two different movies. WTF's disc is a anamorphic widescreen presentation taken from a good looking print with just the smallest damage in a few spots. The colors are a little dull, but that may be a fault of the film stock used at the time. I'm guessing this print is taken from the region 2 disc.

WTF-film again impresses with the options offered on this disc. You can watch this film in Japanese with subs, English dubbed* or hear just the soundtrack. The subs are easy to read, though at times there's a lot to read on the screen, and the Japanese audio is clear and sounds good. The English dub (done by Titan) is slightly lower in fidelity, which is most apparent as a few music cues had to be cut back in from the Japanese soundtrack due to AIP adding their own credits.

There are also trailers, the AIP TV opening credits, an image gallery and alternate audio. Honestly, I can't tell what's alternate about the alternate audio. It brings up a screen with Japanese text and plays a version of either the opening or closing song. Again, I'm guessing this was taken from the region 2 disc, but I really don't know. It's nice to have, even if it's something I'm not interested in really.

As seems to be standard with WTF-flim discs, the menu looks nice (though this one is a little confusing in the layout) and the artwork and disc look very nice. Again, this is another winner from WTF-flim and is highly recommended.

* one interesting thing about the English dub. Not only are the actors dubbed, but the kaiju are redubbed as well. For some reason the dragon now has Godzilla's roar, the frog sounds like Rodan and the giant bird, Mothra.
at 12:09 PM