I couldn't justify buying any more of this junk, but man, are these people getting some mileage out of their (probably) bootleg Halloween stuff this year. I stumbles across two more products bearing the same images as the posters, figurines and finger puppets I blogged earlier.

These are some really crappy PDA pictures, so bear with me. 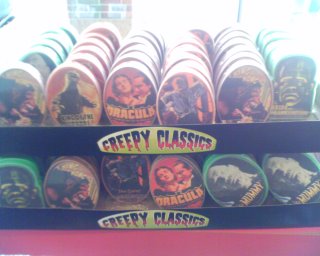 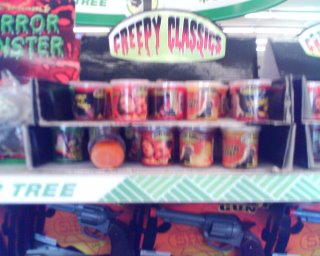 OK, this is going to require a little more explaining because the picture is so terrible. It's slime in a can. Not like Silly Putty, this actually looks like slime. It's watery and looks like it would make a huge mess and possible be toxic to young kids who will inevitable try to eat it.

Hear that sound? It's the bottom of the barrel being scraped. I mean, playing cards? Come on. The slime is at least a little cool, but what's next? Temporary tatoos? Coloring books? I guess they could still slap those pictures on a pack of gum or something like that.

I gotta say though...King of the Lizards STILL MAKES ME LAUGH! Heh heh heh.
at 9:52 PM