Review: Crack in the World (WTF-film) 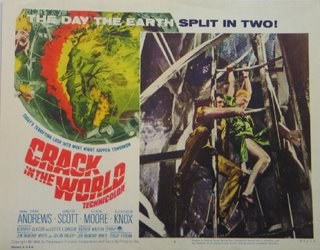 For some reason, I'm really in a DVD reviewing mood. I recently bought a package deal from WTF-films for their entire catalog and since there's not a whole lot out there about these discs, reviewing all their discs as I'm watching them just seems like a good way to go. So this is disc three of the eleven I have. I don't know if I'm going to do them all, you'll just have to stay tuned.

This film is one I wasn't familiar with prior to stumbling across it in WTF's catalog. If I understand correctly, it's not a film that's been shown that often on TV and has never been on video, so it just kind of faded into obscurity. It's too bad because for fans of old school sci-fi, this one is a pretty good movie.

By old-school, I mean the story driven kind of sci-fi as opposed to modern, more special effects movie rollercoasters. Generally these type of movies involve a couple of sour scientists with opposing theories, a love triangle between said scientists and a lady (who is also usually a scientist) and a lot of talky parts.

In "Crack in the World," our scientists are arguing over a theory to tap into the Earth's geothermal energy. Dr. Sorenson wants to drop a nuclear warhead down a hole drilled in the Earth to poke a hole in the crust and let the magma rise while Dr. Rampion thinks this is going to cause a massive to form that would damage the Earth.

Sorenson pushes Rampion out of the way long enough to go ahead with his plan which appears to work, at first. Then reports of tidal waves and earthquakes start coming in and it's up to the scientists to figure out a way to stop the destruction the project has created.

There's also a love triangle involving the doctors and Sorenson's wife, who is also a scientist on the project and previously was involved with Rampion. In another subplot we learn Sorenson has a fatal disease which has led him to race against the clock and recklessly push ahead on the project despite his reservations.

It's kind of a shame that "Crack in the World" has dissapeared though as it's really quite good if you like serious sci-fi. The characters are all developed well and the film never talks down to the audience. The science is accurate to the time and explained in a manner that is clear.

Most of the movie shows the scientists battling to stay one step ahead of the cracking crust. The destruction effects are pretty well done, for movie which probably didn't have that much of a budget to work with.

While this gives the film some of it's most exciting scenes, it also presents it with it's biggest flaw. A few years after "Crack in the World" came out, the theory of plate tectonics would be developed and render the science that forms the core of this film implausible. I'm sure this is part of the reason you don't hear much about this movie anymore.

I'm willing to bet one of the other reasons is that "Crack in the World," which came out in 1965, has more in common with 50s sci-fi films like "Destination Moon" and "Day the Earth Stood Still" than sci-fi that would come after it such as "2001" and "Planet of the Apes." Changing tastes of the time meant this film got lost in the shuffle.

Of course, the fact that it hasn't ever officially appeared on home video doesn't help matters either. As best I can tell, this movie hasn't even shown up much on television. There have been a couple of verified showings on cable, one of which I'm willing to bet was the source for this disc from WTF.

Visually, this disc looks like a second generation dub. Given the obscurity of the film, I'm not complaining. The colors are bright, though there is a bit of bleed typical of a tape dub. The aspect ration is 1.33:1 and, for the life of me, it looks correct. I find it hard to believe that a major studio release in the mid 60s wouldn't be widescreen, but this was a low budget picture for Paramount so who knows?

As with the other WTF-flim discs I've viewed so far, there's an image gallery featuring promo materials and whatnot. The packaging is also very nice looking and looks good on the shelf. These are minor touches, but they show the love for the movie WTF brings to their projects.

While "Crack in the World" isn't going to be for everyone, if you can look past the scientific inaccuracy and enjoy older style sci-fi movies, I think you're going to dig this disc.
at 3:27 PM