Theaters I have known and loved

I haven't done a DVD review in forever, and I'm not quite ready to kick one out there, but I wanted to write about a bit of a nostalgia trip I've been on as of late. For some reason, I've really been interested in the places I used to see movies, especially in my pre-driving days. The kicker of it is, I just realized that none of them show movies anymore. Most don't even exist today.

Let's take the Pendelton Pike Drive-In. This was the first place I ever remember seeing a movie. For my folks, this must have been a godsend as it was five minutes from where we lived and, being as it was a drive-in, they could bring me along with no problems. I remember laying in the back of their Monza station wagon with my sleeping bag usually watching a bit of the movie but falling asleep before the second feature. (Though I distinctly remember seeing Stripes there. And I'm pretty sure I saw Star Wars there, not on the first run, more on that in a moment.)

As I recall, the Pendelton Pike was a very old school drive-in. One screen, speaker boxes, rusty playground, kind of scary concession stand. I can't remember if they had double or triple bills. I suppose it may have varied. Strangely enough, I seem to remember the intermission clocks more than anything else.

We still went there occasional after we moved from that side of town. I don't remember how often though. I'm sure we went to some of the other drive-ins around town, none of which, except for the Tibbs are still running. The Pendelton Pike shut down in 1993 and all that stands is the screen. 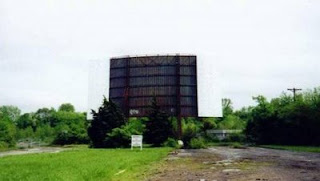 There are two other places on Pendelton Pike I remember seeing movies. One was the Esquire Cinema in Esquire Plaza. Another single screen relic, the building still stands, but I don't know what is in there these days. I really don't remember too much about this place except going there once for someone's birthday to see Return of the Jedi and we all were kind of nonplussed as we'd each seen it about a dozen times by then.

The other is the mighty Eastwood Theater and this place I have vivid memories of. I mentioned Stars Wars earlier and there's a good chance I may have seen Star Wars there as it had the exclusive on the first run. In fact, Star Wars seems to be one of the only reasons anyone mentions the Eastwood on-line.

OK, let me tell you what I remember of this place. It was located in kind of a sketchy part of Pendelton Pike, adult bookstores and whatnot. It looked like a barn on the outside, but inside it was totally cool. Again, this was a single screen, but it was a huge curved Cinerama screen! There were mechanized curtains that opened up and the whole nine yards. In fact, the place reminded me a little of the Seattle Cinerama, though I may be imagining things.

Mostly what I remember seeing at the Eastwood were Disney flicks. Pretty much all of them came around in the early 80s and we went to them. Specifically, I remember Fantasia making a huge impact in that theater with the surrounds (back when not all theaters were even stereo, let alone Dolby,) and that massive curved screen. I might have seen Star Wars there, but I'm not going to lie and say I remember it. (I'm still convinced I saw it at the drive-in, somewhere.)

So, to the opposite end of the spectrum, I have a huge amount of nostalgia for the old General Cinemas. Specifically, the twin at Washington Square, though I know I saw stuff at Glendale, Eastgate and Castleton Square. Those old GC theaters in the mall were pretty funky and soulless, but I still have some nostalgia for them. I remember them being kind of squatty and ugly. In fact, I know one of them had a screen split into two very long and narrow rooms, which always kind of freaked me out when we saw a movie in one of those.

Still, I have a lot of stupid good feelings for those ugly things. And aside from a lot of red and orange carpet, what do I remember most about General Cinema? The intro bumpers!!! w00T!

I know I've had that one on the blog before, but you know, for years that thing was impossible to see and it was driving me crazy. Then there was this later one which, for some reason, I don't remember liking as well:

Then there's this one, which I remember very fondly:

And then there's this popular one, though now we're well into the multiplex era:

I still dig the psychedelic projector one the best. The fact that the music (which I believe is from an Optigan) is all jacked and out of time just adds to the charm and funky feel I remember those little shopping mall theaters had.

So that's what I've been thinking about as we prepare ourselves for drive-in season (though daylight savings time plays hell with that.) Even though I don't get out to see movies as much these days, I still miss the old theaters I used to visit, back when there weren't a dozen screens and the sound systems didn't move your bowels. I wish I had more pictures to go with this, but there just isn't a lot out there. If anyone know of anything, or wants to share some memories of these theaters, leave a comment.
at 11:05 PM

Oh wow... that next to last bumper just unlocked a huge chunk of memories. I had no idea I still had knowledge of that thing floating around in my brain. Thanks for posting... this was a great read that's made me very nostalgic for the smaller theaters of my youth.

Crazy how I can't remember what I did last week, but I can remember the General Cinemas bumpers. Posted an MST3K take on that one just for you.

I really am kind of surprised at the amount of GC policy trailers on YouTube and I'm surprised at the lack of other GC related stuff. I'd think pictures would be easier to come by, but I guess not.

Great post, Rob. For whatever reason, it was the second GC bumper that I remember the best. That brings back a lot.

I've been trying to get any information I can on the old single-screen theatre that was in West Lafayette; I don't remember much about it except that I saw "The Empire Strikes Back" there and there was a whole "concession" stand as you exited the theatre where you could buy all sorts of "Star Wars" merchandise (I think I bought most of my ESB trading cards at this very theatre). It was across the street from either a music store, or a music venue (the building had a giant treble clef painted on the side). I haven't been to Lafayette in forever, though--I doubt this place is still there.

Thanks for posting those GC bumpers! I loved them, and hated them growing up. I'm pretty sure one of my earliest recurring nightmares (when I was super young) was totally abstract and similar to that wierd background of the first one. heh!