Review: Just For The Hell Of It/Blast Off Girls

Since the videogame thing went to crap today (see previous post,) I decided to actually watch one of the seemingly endless DVDs I've been acquiring. Imagine that, DVDs, they're not just for collecting anymore.

Anyway, here's a Herschell Gordon Lewis double feature from Something Weird/Image and it's a Drive-In disc to boot! Whoo hoo! Yeah, I got all the dirve-in intermission stuff when I bought all those "It's Intermission Time!" discs (and yes, I watched them all) but it's really cool seeing them stuck in between the movies in a nifty dirve-in package.

First up is Just For The Hell Of It. There's a story in there somewhere, but I'll be damned if I could find it. Something to do with a gang of hoodlums who like to drive around throwing buckets of water in people's faces and a bronzed all-American good boy who only seems to really get involved when they mess with his girl (and a bunch of kids playing baseball.)

Inbetween, there's tons of footage of the gang ineptly breaking up Salvation Army furniture and a small sailboat that was years past seaworthiness. And they stick a baby in a trashcan, very carefully. Such polite hoodlums. Ray Sager, Nancy Noble and the dikey blond from She-Devils On Wheels all appear.

Just For The Hell Of It raises some questions. Was HGL paying tribute to Wells with his one camera, one shot, one take scenes of destruction, or was he just being cheap? And why didn't someone tell him to wipe the lens off? It looks like Jackson Pollack painted it by the end of the film.

Moving on, The Blast Off Girls is pretty much a sleazier remake of Wild Guitar. Despite the title, it's about five guys (real life band The Faded Blue) taken in by a slick manager who exploits the boys and keeps them beholden. While Arch Hall solved his problems by beating up Ray Dennis Steckler, our boys fake drunk to blow a TV gig and resort to brute force to get the contract back. Again, Ray Sager appears.

Blast Off Girls is most famous for a jaw dropping cameo from Col. Harlan Sanders. Y'see, HGL loved fried chicken and always managed to work a hustle to get some free chicken on the set. In this case, he put Sanders in the movie, with prominent product placement, and catering for the day was taken care of. In this day and age, what image conscious corporation would allow the figurehead of the company to appear in a skangey B-movie like this? Simply awesome, stuff here.

Of the two, Blast Off Girls is actually fairly enjoyable. Though the Faded Blue are a bit too convincing in their ineptness and all in all the movie is much more threadbare than Wild Guitar, it's still quite fun. If you dig the AIP teen movies, but can tolerate something flimsier, you'll dig this one.

Just For The Hell Of It was enjoyable in a different way. All of HGL's other movies I've seen, you can look past the cheapness and enjoy them for what they are. For me, I never could look past the shoddiness of Hell and found it a bit like watching an Ed Wood film. I can tell what Lewis was going for (aside from turning a quick buck) but what he ended up with was pretty padded and pointless. Unless you're in the mood to laugh at, not with, or an HGL completest, you can pass on this one.

On the video front, Hell, doesn't look that bad and Blast Off is one step from being too rough for Image to have considered releasing it. It's entirely watchable, but it gets a bad around the reel changes.

As mentioned, the extras include the drive-in stuff. There's also a bunch of HGL trailers, and a great art gallery with some spiel from the projection booth from back in day. This audio is absolutely killer stuff, don't miss it.

All in all, this isn't a bad double feature. If you are a HGL fan, you're going to dig this a lot more but I wouldn't recommend this as your introduction to his work.
at 7:40 PM No comments:

Man, I'm really starting to understand why people choose emulation over the real things when it comes to video games.

Longtime readers may recall that a few years ago I built a Supergun so I could play arcade games on the TV at home. Since moving, I hadn't had a chance to set anything up, but having a day off from work, today seemed like a good day to make it happen.

I get everything downstairs to my game room and set up. I plug in my Ibara board, and the sound crackles and goes out. At first I'm thinking I'd just blown the amp on a $300+ board. Great. So I plug in another one, same thing. No way I could have blown two boards.

Long story short, I'm under the hood now, pulling wires, switching speakers, doing everything I can think of. Nothing. No sound.

For some reason, I decide to try yet another board. Not only do I get no sound, the video is completely jacked. Switch back to one of the other boards and the video is fine. Well, just great.

In the end, I spent about two hours messing around. I never did play anything and discovered that something is wrong with my Supergun that I couldn't figure out and that I have a Taito F3 motherboard that is putting out bad video for a reason I can't determine. Everything was working perfectly last time and now everything is messed up.

Plus my Neo Geo is MIA. I know it's here somewhere, but since the move, I haven't the foggiest idea where.

The sad part is, all the while my computer was sitting right next to me. I could have just hopped on it, fired up MAME and played all afternoon. Maybe next time I shoudl do just that.
at 6:45 PM No comments:

Email ThisBlogThis!Share to TwitterShare to FacebookShare to Pinterest
Labels: videogame 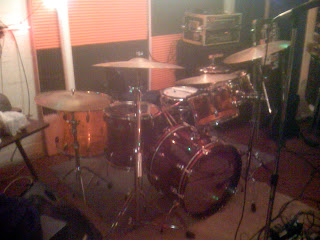 Here's the current incarnation of the Vistalite kit. It's huge. This whole thing is quite a change from the smaller Gretsch drums I was playing. First off, you have the size issue. Bigger drums mean a less compact set up. Then there's more drums to tune and I'm going with lower tunings.

Still, it's fun. I'm going to tackle the cymbal set up next as I don't like the way the right hand ride is hanging up by itself. I think I'm also going to mothball that 22" Zildijan A and go back to my old 20" Paiste 602 for my ride. I think the 22" has a hairline crack somewhere and it's driving me nuts. Plus, I just want a different sound.

Weird coincidence that the same time I change up my kit from what I've been playing for about 10 years, everything with the band changes as well. Change is good, I guess.