OK, sorry I've been kinda lazy on the posting, but I have to drop kind of a heavy post here for a second. I have a friend who went to an audiologist recently and found out that he is pretty much deaf in one ear and is very close in the other. He's a musician and has years of going to loud shows (metal, hardcore, electronic, industrial, etc.) It also doesn't help that he works in a very noisy environment, though he told me he always wears earplugs at work.

And that's the key. It's easy to not think about hearing protection when you go out, but too many clubs run the sound too damn loud. If you are involved in a music scene for any length of time and you're going to shows often without earplugs, you're going to feel the effects sooner or later.

I know that it took me a long time before I was wearing earplugs with any regularity. Basically, by the time I really got serious about it, I'd already developed a high pitch ring in both ears. I've had my hearing checked and apparently I haven't suffered any loss, but I can't help but wonder if I'd started wearing earplugs sooner if I'd have this ringing.

So, what I'm saying is, invest in some earplugs. You don't have to get custom ones, though if you are a musician or someone who goes to a lot of shows, I think it's the smartest money you can spend. The foam stoppers are ok, but even the slightly more expensive ones with the filters that you can get at music stores are better. Anything is better than nothing.

Also, watch the volume on the ear buds. I know sometimes when I'm listening to the iPod I catch myself turning it up too loud. Now I start at a volume that seems a little too low and let my ears get used to it rather than turning it up.

Well, that's my public service message for the month. Protect your hearing. Seriously though, it's easy to do and so often overlooked. And the alternative is pretty depressing.
at 10:51 AM No comments:

The so-called "World's Greatest Music Collection" hits eBay again. And again, with a $3 million starting bid. And again, as the whole enchilada. Except this time, approved bidders can access the 45 database. Whoo, hoo.

It's funny. You'd think this guy would be tired of flogging this thing. He's been at it for, what, four or five years? Each year, the number of people interested goes down.

And I remember the follow up to the first eBay auction. After the winner was found to be a fraud, they announced they were in talks with the runner ups and they had a deal, they just needed to work out the details.

Yeah, it was all BS.

So, here we are. Same scenario, except they must approve bidders first. Any guesses at to if this thing sells this time?

Email ThisBlogThis!Share to TwitterShare to FacebookShare to Pinterest
Labels: the clueless, vinyl

Usually I don't pay much attention to Apple rumors, but this one caught my eye. According to the Financial Times, Apple is in talks (with whom?) to add an "all you can eat" subscription service to the cost of a new iPod. What I've seen on the article (it's hidden behind a subscriber login,) it seems they would do something similar to the Nokia/Universal deal.

Now, I think i've mentioned it before, but I'm a big supporter of the subscription music thing. Well, at least I'm a supporter in principal because as of yet, I haven't been able to take advantage of one of the few in operation. And this leads me to the criticisms that people always trot out when you bring up subscription bases music services and why I think they're off the mark.

One of my favorites is the ever popular "it's doesn't work/it's a failed business model." This implies that there has been some large scale subscription music service out there that people just don't want a part of. Well, there are two companies offering such a thing, Napster and Rhapsody. Both of them only offer tracks as protected Windows Media, which won't work on the iPod (or Microsoft's own Zune.) So, is it really fair to declare the whole idea a failure when the only companies to try it have made their product incompatible with the most popular music player out there (and completely incompatible with an entire computer operating system as well.)

Then there's the "people want to own, not rent, their music" crowd. Sure, there's a lot of people who feel that way. For many things, I agree with them. But, I think the reality of the current music biz doesn't play this one out. Sales are dropping. Used CD are glutting the market. People are still downloading music though.

OK, I'm one of those people who doesn't equate downloading with owning the music, especially when it's DRM laden. To my eyes, if people really cared that much about owning the music, CD sales would still be climbing, not falling. People wouldn't be ripping and tossing their CD collections. I just don't think it's all that important for most people to "own" their music as long as they have access to it, which is what the subscription thing is really about.

And let's take a look as the kind of stuff people are buying. Something like fifty skadillion people downloaded "Crank That." How many of those people do you thing really feel the need to own that one? How many will want to hear it five years from now? This time next year, I guarantee that CD will be clogging used bins.

Now, let's say those people were offered a chance to download that on a subscription basis. They could listen to it as much as they wanted as long as they were paid up, and they could listen to millions of other songs too. When they were sick of Solja Boy, that track disappears and they never have to think about it again. Unless they want to hear it and it's just a click away.

I think the people making this argument are also creating a false dichotomy. The existence of subscription based music service does not mean CDs are going to disappear. I'm sure the music industry will be more than happy to accommodate, for an additional fee, those who wish to "own" all the Solja Boys and Nicklebacks and whatever else. As I understand, even Napster and Rhapsody's subscriptions allow one to purchase tracks if they want.

Now, there are a few things I think are valid. The big one is who is making money off this and where it is going. I'm already skeptical about how much money actually goes back to the artists in the current download system. If things change to a one time fee of $20 - $80 (as the Times article mentions,) how is anyone making anything out of this? Specifically, how does that filter to the artists actually making the music? My guess is, like the RIAA settlements, it doesn't.

And when the industry is moaning about lost profit etc., doesn't turning over the keys to the shop for a one-time payout (and a small one at that) seem counterintuitive? Far be it for me to cry for the major labels, but I find it curious they would even consider something like this when it seems like every other day we hear about how in the crapper they are. (Of course, business decisions like this might have something to do with it.)

The other thing that I think needs to be addressed is, will this be optional? Let's say you are someone who really has no interest in downloading stuff and you're only planning to use your iPod for your own rips. Why should you be charged for a service you'll never use? (Let's face it, the Times article makes it sound like Apple is paying for this, but we all know it will come back to the consumer. Apple is not a charity and they don't need to take a loss to add something like this, even though I think it would totally decimate the competition if they could pull it off.)

So there's my take on this whole thing. As a consumer and music fan, I think it's a great idea, if they can make it work. As a musician, I'm a little concerned about following the money.
at 1:51 PM No comments: 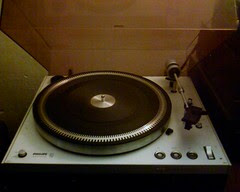 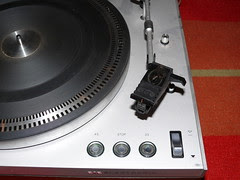 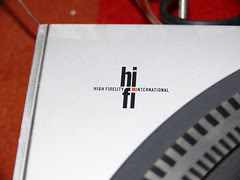 So, anyway, it's the end of the line for the little Philips 212. $4.04 well spent. If you're looking for a good old school deck for not much scratch (these go for cheap on eBay), I'd highly recommend checking one out.
at 3:00 PM 4 comments:

hope this will make up for it.