U2 manager Paul McGuiness thinks the technology industry is to blame for the record industry's woes. He things they should do more to filter and spy on users. He thinks Dell and Apple should be be paying money to the music companies for (alleged) lost revenue*.

I could go on for days about the number of faulty pretenses this bozo is basing his screed on, but why bother? If you're reading this, chances are, you could do. What I will say is this: people like U2 and Paul McGuiness could eliminate a large chunk of illegal tomorrow if they really wanted to. But it would involve rich rock stars (and the parasites feeding on them) finally saying "we're rich enough."

U2 made news with the first digital download "boxset", The Complete U2. Though they opened the vaults and collected some tracks, there wasn't anything really that new there. They threw together a digital booklet. No physical product was made. Expenses to put this thing together were pretty low, I'm guessing.

The set cost $150, for which you got 398 unique DRM encrusted 128kbp AAC files. Some might look at that as a great deal, at about 38 cents a track, but I'm saying, if you really want to kill illegal downloading, you can do better.

$150? How about $30? I can go out and buy The Complete Spiderman, all the issues from '63-2006 for less than $50. And those weren't in a digital format to begin with. I'm going to guess it was a lot more complicated to transfer hundreds of comics to the digital domain than essentially ripping stuff already digital to AAC.

Don't like $30 for the whole shooting match? Well, how about this: let's drop the album prices. $10 for a download of The Joshua Tree? How about $5? $3? $2? Make it so ridiculously low that one would be stupid not to purchase it legally.

And let's take an album like The Joshua Tree. At this point in it's life, it's pure profit, if we're getting in the download world. The recording expenses have long since been recouped, there's no physical product and the cost of delivery is very small.

Anyone want to tell me why back catalog albums from megastars have to sell for close to the cost of a physical CD? OK, I know, I know. It's because they are pretty much pure profit at this point. I can't say I blame a person for wanting to get fat checks rolling in for doing nothing.

But the system isn't working like that anymore. Rather than finding creative new ways to work within it, these dinosaurs are making fools of themselves whining about technology and suing their fans.

It's funny. I am a musician and a huge music fan, but everyday someone opens their mouth and makes me a little less sympathetic to the plight of the folks at the top.


*Sidenote: anyone else choke on the irony that this guy comes out railing against Apple when Bono was (and still is, to an extent) the poster boy for the friggin' iPod? Come on, there was a U2 signature model iPod fer gawdsakes!
at 6:47 PM 1 comment:

Email ThisBlogThis!Share to TwitterShare to FacebookShare to Pinterest
Labels: mp3, music, U2 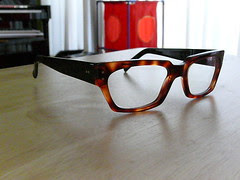 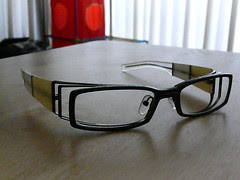 They're like 3D without the red/blue lenses. From the side: 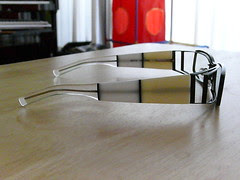 And finally, the glasses that have more personality than I do. 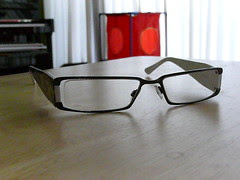 We have nicknamed these the poop glasses. 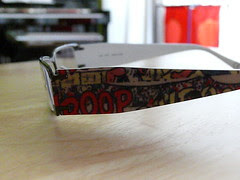 Thanks to our friend Jenny at SEE Optical in Skokie, IL for the hook up.
at 6:03 PM 2 comments:

Email ThisBlogThis!Share to TwitterShare to FacebookShare to Pinterest
Labels: glasses, planet me

Audiophiles often claim their expensive stereo rigs bring them closer to the music and allow them to be more emotionally involved with the performances. I had an experience like that myself this afternoon. It was a performance I hadn't heard before or a piece I really wasn't familiar with. Honestly, it moved me quite deeply, which was a totally unexpected thing. The ferociousness of the playing, the depth of emotion in the playing...what was coming from the speakers caught me by surprise and pulled me in.

Now, here's the punch line: aurally what I was listening to was a nightmare. The track was "Ogunde" from John Coltrane's Olatunji Concert album. The concert, which was a full on free jazz blow out, took place in an auditorium and was recorded by an amateur in what amounts to an authorized bootleg. The balance is way off. The recording is a maelstrom of tenor sax and cymbal*. To add insult to injury, I was listening to a transcoded mp3 (from 128kbp WMA) which was being streamed to an iPod dock** across the room.

Yet, "Ogunde" completely stopped me in my tracks. And it, specifically Pharoah Sanders, scared the hell out of me. I was totally engrossed, despite the sonic scum.

Now, one could say even recorded and reproduced well, this album would be a wash of noise. I won't argue that 'Trane from this period is the very definition of difficult listening. In fact, it'd been so long since I've dug into this period (I've been heavy on the Fearless Leader box set from '57-'58 as of late) I'd really forgotten how out he got post '65.

However, the poor sound quality all the way down the line didn't take away the music's ability to hit me on an emotional level. Nor does the poor sound of early Louis Armstrong prevent me from enjoying those records either. And I still remember the first time I "got" Sgt. Pepper, it was on a cheap Walkman with crappy headphones.

High fidelity is fun and it can enhance your enjoyment of music, but it will never replace the intrinsic qualities of the music itself. The feeling, the spark, the emotion is either there or it isn't. While a high end stereo set up and a properly recorded source can make you feel like you're in the room with the musicians, it won't put that intangible "thing" into music that didn't have it before.

When I read reviews of high end gear, I have to feel sorry for people who seem to need $20k of speaker cable to get the same emotional impact from their music I can through a crappy pair of earbuds and an iPod. Granted, if I have a choice, I'd take better sound quality. In the end, the music is going to win out for me no matter what kind of audio roadblocks it's up against.

* and a duet for Jimmy Garrison's bass and car horn at the beginning of "My Favorite Things." Seems the taper was sitting close to an open window.

** Technically a PSP dock with an aux in. And to be fair, the amp in this critter is the (seriously, no joke) audiophile approved Sonic Impact T-Amp, but we're still talking about two 3" drivers about two feet apart for the loudspeaker section of this set up.
at 8:22 PM 2 comments:

In this article in the weekend section about ditching CDs for mp3s. It's nothing that readers of my scribbles here won't be shocked to read, but as always Dave Lindquist does a good job and it's a pretty nifty piece.

There were a couple of things I didn't get to touch on with him that I want to throw out here. One of which being the legality of ripping and then disposing of the discs. As I understand the law (IANAL) it's illegal. So yeah, I'm probably admitting and advocating illegal activity in the pages of the Star*. Whoo-hoo.

The thing is, right now, I think the RIAA and other interested parties are more interested in file sharing than some chuckle head like me who is ripping and getting pennies on the dollar for his CD collection. Yeah there's scuttlebut that the majors who have given Amazon DRM free mp3s are leaning on them about their used CD sales, but honestly, I think the desire of these folks to break Apple's deathlock on the on-line music sales is stronger than their desire to squelch used CD sales...at least at the moment. (If Amazon's mp3 sales really take off, expect this to change.)

The other thing I mentioned to Dave is I do miss liner notes. Just this morning, I've been thumbing through the excellent booklet from John Coltrane's Fearless Leader set (I'm contemplating buying the next set in this series.) If I'd downloaded those tracks from eMusic or just ripped the discs, I wouldn't have that to go back to. In fact, I recently bought an Art Tatum box set I had downloaded from eMusic for this reason. Granted, more times than not, all you get is lyrics and credits, both of which can be found on line. But I buy a lot of jazz reissues and do enjoy the pictures and information you get with most of those.

Also, the timing of this article is really interesting for me as I've been contemplating finally throwing some money into the stereo I've always wanted. But, then I look at it and ask myself why? The fact of the matter is, I so rarely have time to really sit down and listen to music. What's the point of dropping several grand into a system that is just going to collect dust most of the time?

So, what do you, fair reader, think?

* In the print version, one of the program directors for WTTS was interviewed and straight up said she had two iPods full of music ripped from the station library. My jaw kind of dropped at that one. Considering how touchy everyone is about leaks that originat from promos given to media and radio, I don't think I'd be admitting to ripping my station's library. At least not if it was a paying gig like hers.
at 11:41 AM 4 comments: