I've been meaning to get to this forever, but keep forgetting, so here it is now. First off, I'd like to recommend you check out Jeff Rothe's blog for awesome stuff about golden age arcade games. It's become one of my favorite sources for information on restoring and history of machines of the pre-crash era.

Also, I'd recommend you check out my friend and the keyboard player/singer in Yuki Gwynn's blog Cult of Domesticity. She's also making handmade bags and other stuff, so you can check that stuff out there as well.

Email ThisBlogThis!Share to TwitterShare to FacebookShare to Pinterest
Labels: links 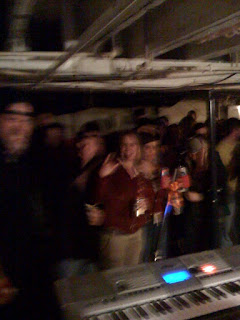 I felt kind of out of place as I knew very few people and it was a basement show with hardcore bands and whatnot. However, it was a show for a good friend of Jason's who passed away recently, so I was more than happy to do it. It was kind of a rough evening though as it was raining a lot and we had to park half way across town, it seemed. Plus there were a lot of people there and that always wigs me out a bit. Luckily Bob Fouts from Stand and Deliver was loaning me drums, which made the night a hell of a lot easier.

So we got there and I think we were all anxious to play and kind of figured we'd go over pretty poorly as we were kind of out of place. It all worked out though. After the line up stopped changing around, things got better. Of course, when we actually got to play, things came together in a big way. I guess I was steaming and I'm amazed I didn't catch pneumonia. I felt our playing was better than in Chicago. Probably looser, but the energy was stronger. I don't know why. Maybe it was the whole basement show vibe.

Oh and yeah, people seemed into it. It was really pretty nice. I'm sure there were people who didn't care for us at all, and that's fine, but we had a pretty packed room from what I could see. I forgot that people at these shows tend to be supportive of all the bands because you don't usually get asked into someone's basement if you're going to really suck. So that was nice.

Anyway, this has been kind of hard to type as I'm in pretty poor shape. I think I was slamming the hell out of Bob's drums (sorry about that.) My left hand especially is blistered and I'm missing a chunk of skin on my pinky. How that happened is a mystery.
at 11:44 AM 1 comment:

(I just realized I forgot to do one of these for a show we played earlier in the month. Oops. Well, the 11th, we played the Melody Inn. A good time was had by all and the turnout was strong for a Wednesday. The end.)

Anyway, Jason has been on a booking frenzy and got us a date at this bar in Chicago called the Darkroom. Originally, it was to be a different date, but something fell through and we ended up with this night instead. Worked out better, I think, as this was a monthly show called The Equalizer sponsored buy The Onion and KEXP. Kind of cool, as we're all big fans of The Onion.

I'm still kind of amazed we landed a Friday night as a pretty hip bar in Chicago being that we really don't have a name for ourselves. I guess the power of Yuki is just too strong.

I'd gone back and forth about bringing my own drums since Kristen and I were going up early and are driving a Canyonaro right now. Ultimately I was talked out of it, as Tiger Spirit, who we played before, said we could use their gear. Nice folks and an enjoyable band.

So, I got to play on this old Slingerland kit with large drums. It was fun, but I walked the line between getting things set right and knocking things out of whack for the drummer who's kit is was. Plus I felt like an idiot for forgetting my pedal and throne. The drums were fine, but my playing on them was a bit off because of that.

But I had good monitor for a change and, for the most part, I think we played well but not particularly inspired. The show was taped, so I'll get to hear it, but I'm guessing that it's going to be tight and mostly correct but missing some of the fire we've had in practice lately. So it goes.

The audience was bigger than what I expected and they were polite and more attentive than I'd expected. However, we only sold two shirts, both to family, so I guess the proof is in the pudding.

ADDENDUM: Two things I almost forgot. One, we were interviewed by KEXP and I'm sure it will be absolutely embarrassing. Two, upon entering the club, I was told that if I wanted some moonshine, it was $10 for a jar. Sure enough, a couple hours later, I got a Ball canning jar wrapped in newspaper with a clear liquid in it. I waited until I got home to sample it, but it's fairly smooth going down, but once it hits, it burns all the way up.
at 5:36 PM 2 comments:

Warner Movies On Demand/Made To Order

Read about it here: http://tinyurl.com/dbrx8r

Summary, if you didn't click the link, Warner is offering films from the vault going back to the 20s not previously available as on demand downloads and made to order DVDs. I have to wonder what's taken them so long, but whatever. It's a good idea at any rate.

Except the downloads won't play on Mac, which leads me to believe they're going to be WMV files DRM encumbered with Microsoft's Plays For Sure. And they'll cost you $15 for the privilege. Want a DVD? It's $20.

I feel like a broken record but, here's another example of just not getting it. The idea, while good, is a bit late. They may think these films are "unarchived" but it's really not that difficult to find tons of "unarchived" movies for free online, if you're not troubled by the legality of it.

In a time when even the control freakish record labels are finally realizing DRM doesn't work, they're bringing out something with it? And, naturally, they've chosen the path which excludes Apple users, who I know are a minority. But they're a minority with money.

And $20 for what I'm assuming is going to be a bare bones DVD might have flown five years ago, but it isn't acceptable today. DVD prices are in the tank and you can get new Blu-Ray releases for $20. While I recognize there's additional cost with to order type services, Something Weird Video has their to order DVDs priced around $8-$10, which is a much more reasonable cost.

So, once again, I'm finding myself writing close, but no cigar. Sometimes I feel like one of those people who just won't be satisfied no matter what. It just irritates me to see time and time again when these companies do something that they should have been done ages ago, but make mistakes so obvious and then complain about how it didn't work and piracy is ruining everything etc., etc. It's especially irritating because, with something like this, I really think it could work, but not the way they're going to do it.

I'll still be interested to see what films they offer up and how long they keep at it. But this also goes back to the "too little, too late" thing because I really can't think of too much from the WB vaults I'd want to see that I couldn't get my hands on if I wanted. Maybe for the people who are as resourceful as I am, this will be a great thing. Who knows?
at 11:04 AM 1 comment:

Hi, I am still here, promise.

I realized the other day, I'm really slacking on the blog. I meant to post when I got back from school, but never did. Anyway, I am back and school was pretty amazing. I just posted a bunch of pictures of where I lived and you can see them here: http://www.flickr.com/photos/captainwrong/sets/72157615771650386/

Really, I've been spending more time of Facebook as I guess I haven't felt I have much to say that can't be summed up in a few hundred characters. Still, I hope to hit the movie stuff again soon. I've seen a bunch of stuff recently, nothing has really inspired me to write about it.