Some thoughts on Godzilla 2014

I'm going to preface this by saying there's bound to be spoilers ahead. If that thought bothers you, avert your eyes.

That said, this isn't going to be a review or a recap. Just a few thoughts I took away from my screening of the new Godzilla film. I'll start out by saying that overall I enjoyed the film. It's not a Toho Godzilla film, but it's not the Tri-Star Godzilla either. This Godzilla is kind of it's own monster (ha!) and if you go in with that in mind, and you're a fan of kaiju, you're bound to find something you'll like.

The monsters look great...when you can see them. I'm not 100% in love with the design of Godzilla, but it is growing on me. At the very least, it's clearly in the tradition and completely recognizable as a Godzilla. The movement is great and I especially liked how expressive the face and tail were. I really loved when he had to stop and catch his breath while fighting off the MUTOs. It gave the character a bit of vulnerability that I think worked well. The MUTOs were pretty cool, but I couldn't help be reminded of the Heisei Gamera era Gyaos especially when looking at the male MUTO.

The battles were fun to watch. Loved Godzilla's atomic breath. Loved seeing Honolulu, Las Vegas and San Francisco get destroyed. What I didn't like was the way Gareth Edwards filmed some of the battles. For example, you'd see a big, juicy chunk of action, but it's just reflected in a bus window. Or there's the peep booth window effect where just when things are getting good, a door literally closes and the action fades to black. I'm all for teasing it to add tension, but too often I felt let down that Edwards chose a more artsy shot over directly looking at what's going on.

The human element is kind of a problem as well. For me, the best, most fleshed out character was Joe Brody (played by Bryan Cranson) and he got killed off early in the film. His son, Ford (Aaron Taylor-Johnson) is pretty mechanical and barely shows much emotion. The token scientist, Dr. Serizawa (Ken Watanabe,) plays to stereotype, looking shellshocked throughout and warning against using nuclear weapons on the creatures. The military folks are the stereotypical two-dimensional types we see in every kaiju film. Considering the movie focuses so much on the people rather than the monsters, it's surprisingly hard to get very involved in any of their stories. The film touched a bit on the actual human cost of a giant monster battle, which I liked, but, the Heisei Gamera films did it better.

The only other thing I can really think to add at the moment is that this is a pretty dark and serious movie. While Godzilla plays the hero, the mood and tone harkens back to the original Godzilla. It's got a pretty heavy vibe for a film that is based on a pretty silly premise. I think it works, though the sequel ready ending left me a little cold. It'll be interesting to see where Legendary Pictures takes things in that already announced sequel.
at 8:42 PM 2 comments:

Part one is done, so here's part two. Again sorry for the crap pictures.

I'd initially passed LCD Soundsystem's The Long Goodbye over thinking I'd get the much cheaper Blu-Ray instead. Then I remembered how concert films usually bore me and decided to pick this up anyway. It's expensive and pressed in a manner that is DJ friendly but a little weird for those of us rocking a solo turntable (odd sides appear on one record, evens in another, so you have to keep changing records.) Still, the performance is pretty epic and if you're a fan, you're going to want this one.

I have a subscription to Light In The Attic, so I got both their RSD releases as part of that. Sorry to say, as I love this label a lot, I think they kind of dropped the ball this year. Pictured above is Playing Guitar The Easy Way by Michael Chapman. I don't know the back story, so I'mjust going to tell you what I hear. Each track starts out with a couple of scales, then he launches into a kind of typical late 70's folky instrumental thing. Really does nothing much for me, though the package with a big booklet is nice.

A World of Peace Must Come is a vinyl reissue of LITA's 2008 release by Stephen John Kalinich. Long story short, this was recorded in Brian Wilson's living room and sounds every bit of it. It's half almost madrigal and half hippy dippy spoken word. Maybe I was in a bad mood when I listened to this, but it just was a little too pot and patchouli for my tastes.

Another label I love did deliver this year. Death Waltz delivered a quartet of their usual cult movie soundtrack goodness, three of which shared the above sleeve. The fourth was In The Wall and looked like this:

Not sure why they did it that way, but there it is. Death Waltz is a label that just gets it. All this year's releases came on cool multi-colored vinyl, had a big poster and 12"x12" slick. They all were pretty good with the 1990: Bronx Warriors soundtrack standing out for me. Good work and well worth the investment.

Speaking of soundtracks, here's One Way Static's picture disc release of The Last House On The Left. This is an interesting soundtrack, dated to be sure, but if you're into that early 70's vibe, you'll dig it. There's some groovy tunes, some Moog noodling, some hoedown stuff, etc. Noisy, like most picture discs are, but the source material is kind of lo-fi anyway.

Finally, here's the annual "what was I thinking" pick up. Now, I love Spacemen 3, especially the early stuff. The problem being, the entire contents of this set is readily available on an inexpensive CD, also titled Translucent Flashbacks, where as this three 12" single set ran $80. Ouch. But it did come with a download card, for untagged 128kbp mp3s. In 2014, that's just unacceptable.
at 6:49 PM No comments:

I'm Rob G. And I'm back from the dead...
Has it really been three years??? Well, whadda know? Anyway. Another Record Store Day has come and gone and rather than rehash all the old sentiments I blogged about ages ago, I figured I'd just do a brief run down of my haul. Once again, I spent more than I'd planned, even though the list this year really left me underwhelmed. Go figure. (Sorry for the crap pictures. I'm doing this from my iPad.) 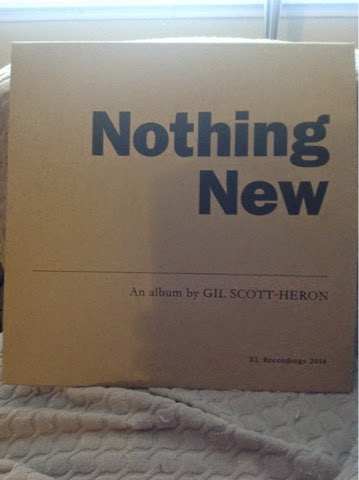 Leading off is Nothing New by Gil Scott-Heron, one of the few releases I was really looking forward to. Long story short, this is stuff GSH originally recorded for XL Records but was passed over in favor of what became I'm New Here/We're New Here. Stark recordings of just Gil and his piano, revisiting deep cuts from his catalog and a little chatting in between tracks. Needless to say, this is an essential pick-up for fans of GSH. Very deep stuff, goosebump territory here. 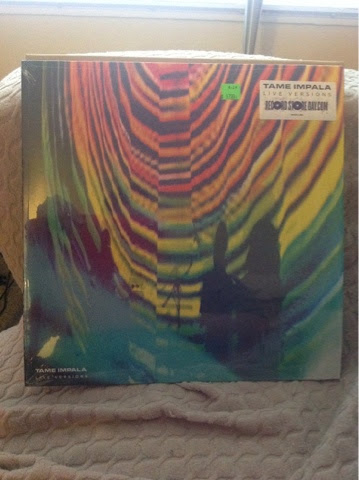 Tame Impala dropped Live Versions this year and I may be a little biased about this release as it happens to be from a Chicago show I attended. The band stretches out a bit in concert, so this isn't just a same old stuff with crowd noises type of affair. My only beef is that they trimmed down the set list to fit it on one record. I'd have gladly ponied up for a second disc to have the whole show. Nice emerald green vinyl too. 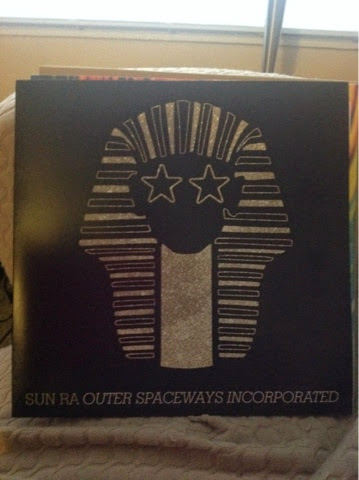 From 1968, we have Sun Ra's Outer Spaceways Incorporated, a nice slab of prime, live Arkestra. For an artist as prolific as Sun Ra, it can be a real crap shoot as to what you're getting, but this album delivers. Not a particularly rare recording, but nice to have it on lavender colored vinyl with snappy new artwork. Shame ORG Music didn't bother with a personnel listing though. 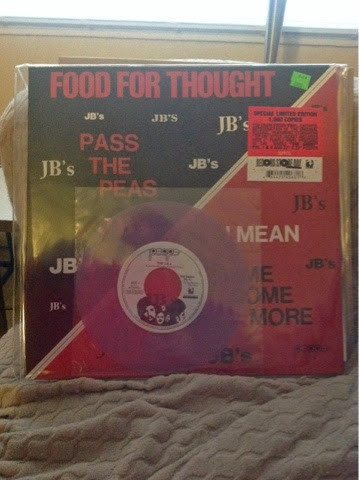 Get On Down has become one of my favorite reissue labels, but this year their RSD pickins were kind of slim. Food For Thought by The J.B.s is uneven as most James Brown related LPs are, but there are some stone cold classics contained within. I'm sure I have all these tracks on various compilations, but it's still a good spin. The purple vinyl single of The Grunt is a nice touch, though the poster of the album cover I could give or take. 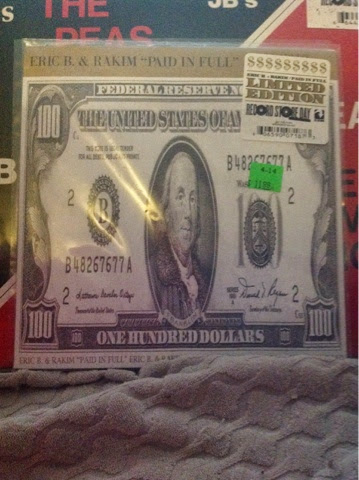 And my second pull from Get On Down is my token overpriced 7" for this year ($12! Damn!) The Coldcut remix of Paid In Full is a classic moment in hip-hop and this is a nice reproduction of the British version of what may be Eric B. & Rakim's finest moment. The flip side ("Eric B. Is on the Cut") still sounds like filler and I'd have preferred the 12" of this with the full seven minute remix, so I guess I'm kind if split on this one. 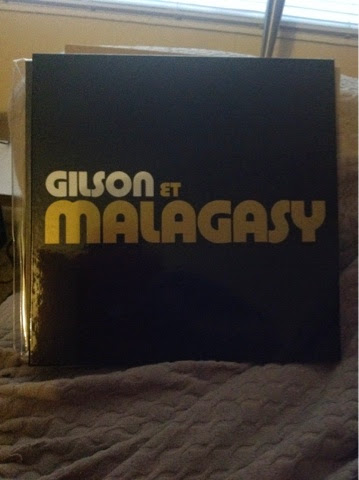 My blind buy for this year was Jazzman's Jef Gilson et Malagasy five LP/one 7" set. I'm still digesting this one, as it's all new to me, but I'm liking what I hear so far. Spiritual jazz with a bit of a foreign twinge. What's not to like, other than the packaging, which left me a bit underwhelmed. 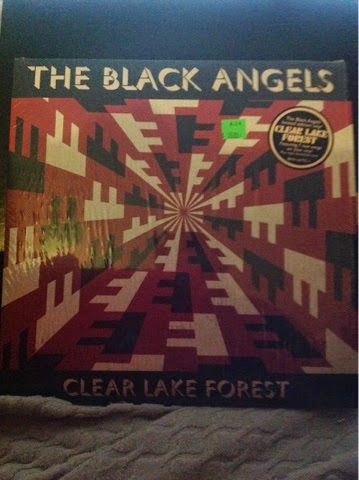 Another RSD repeat performer is The Black Angels who came out with another 10" this year called Clear Lake Forest. I'm not really sure what to say about is one other than if you don't like the Angels brand of Texas psychedelia, this isn't going to win you over. Clear vinyl, mp3 card. You know the drill.
I think I'm going to stop for tonight as I'm running out of things to say. Keep an eye open for part two, before RSD '15, I hope.
at 7:37 PM No comments: