Found this via Game, Set, Watch. Talk about something I hadn't thought about in years, this was my favorite book as a youngster. It's still pretty cool today as a piece of retrofuturism. (Speaking of, I had a dream about Disney's Space Mountain last night, back when RCA was still sponsoring it.)

Looking at this book now, the interesting thing to me is all the handheld and tabletop games in it. At the time, I assumed many of these were made up as I'd never seen them. Well, in the time since then, I think I've seen every one of those somewhere.

I also still love the diagram of how a computer works with all the little robots running information around. Way cool.
at 9:58 AM No comments:

First off, I should mention that if anyone out there is an eMusic subscriber, it might be worth your while to swing by Circuit City some time soon. They have starter subscription packs that work like booster packs for the blow out price of $4.98 for 65 tracks. A really good deal, considering the usual eMusic booster price is something like $19.95 for 50.

Unfortunately, you can't still get Ray Baretto's Acid through eMusic (though a bunch of other Fania titles are available, seems they switched distributors and not everything is through the new one yet) but it's an album worth checking out. I'm no expert, but I think it's considered a high point of boogaloo music and it's one of those albums I come back to often.

About the only track on there you might know is "Deeper Shade of Soul" which, of course, was sampled by Urban Dance Squad ages ago. There's also "The Soul Drummers," which has appeared on a comp or two. Really though, it's all killer Latin soul which kind of makes you glad to be alive.

I also wanted to mention the new Al Green. Yeah, I was naughty and downloaded a leak. I've been a big fan of his for ages and was pretty impressed with his two previous comeback albums. (I think I did a review of one for Nuvo. I really can't remember.) I'm also a big fan of ?uestlove, so when I found out he was producing this time around, I couldn't wait to hear the results.

It's kind of ironic that this album nails the whole mid 70s vibe better than "I Can't Stop" and "Everything's OK" considering those two albums were produced by Green's old producer (Willie Mitchell) at the old Royal Studios with as many of the old musicians as are still around. "Lay It Down" features younger cats such as the Dap-Tone horns and a younger producer but really sounds like someone dug up some old tapes and put them out. Just roll the treble off a big and compress it a hair to get the sound of those old 45s and you'd think it was some mid-70s Hi release that fell through the cracks.

The problem is, while "Lay It Down" may have vibe to spare, the material is weaker this time around. Green's two previous Blue Note albums each had a single or two worth of classic stuff (and, after all, Green is a singles artist at heart.) This time around, there just isn't anything that gets under your skin like an Al Green classic should.

Add to that a few completely unnecessary guest shots. John Legend and especially Anthony Hamilton at least hold their own but Corinne Bailey Rae (who?) is totally outclassed. An interview with ?uestlove in Wax Poetics implies the record company would have like more guests and he talked them down to three. I feel it was three too many. Granted, I'm not a big fan of these appearances anyway as they always feel shoehorned in, no exception here. But I really think on an Al Green record, when the man is still in fine form, why do I want to hear someone else?

And that is the bottom line. Green still has it. I think his voice has a little more "air" on top than it did on "Everything's OK" but he's still got the fire and is still pretty much nailing it. The problem is, despite Green and all the talent surrounding him on "Lay It Down," the lack of any memorable songs makes this one a pretty big disappointment.

To be fair, I'm judging a leaked copy I picked up about a month ago. As far as I know, the album drops next week, so I don't know how much different the release will be from the advance. Maybe they have a tune or two that they held back. Somehow I kinda doubt it.
at 3:31 PM No comments: 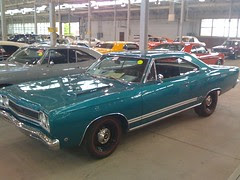 because I went to the auto auction at the state fairgrounds today. This wasn't my favorite car, but it was close. I dig the late 60s Mopar. I got better pics coming soon.

From the blog Catroon Brew:

I only hope the upcoming movie is this good.
at 10:50 AM No comments:

Kind of surprised I hadn't received one of these before. About two (maybe it was three?) years ago, I uploaded a bunch of clips to YouTube from this random pile of VHS tapes I thrifted. One of which was SCTV's Michael McDonald parody. (This was before yacht rock, I think.) Well, that was the one pulled.

It's kind of a shame as it's a funny clip and due to the use of Christopher Cross' "Ride Like The Wind," I doubt its going to get a video release. I know there have been a couple of SCTV collections, but they were low budget and, judging by the number I've seen at Big Lots and Half Price Books, I'm guessing didn't sell too well.

UPDATE: looks like they torched my entire account over that one clip. Thank SCTV.
at 12:42 AM No comments:

Got my Pinball Machine.

A little over two years ago, I acquired a pinball machine. This morning, it finally arrived at my house. 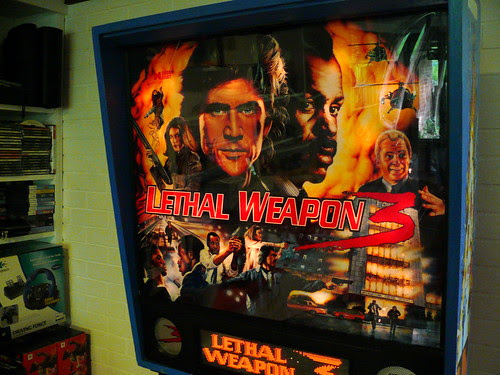 I always wanted a pinball machine with the image of a bigoted actor and that plays C&C Music Factory. 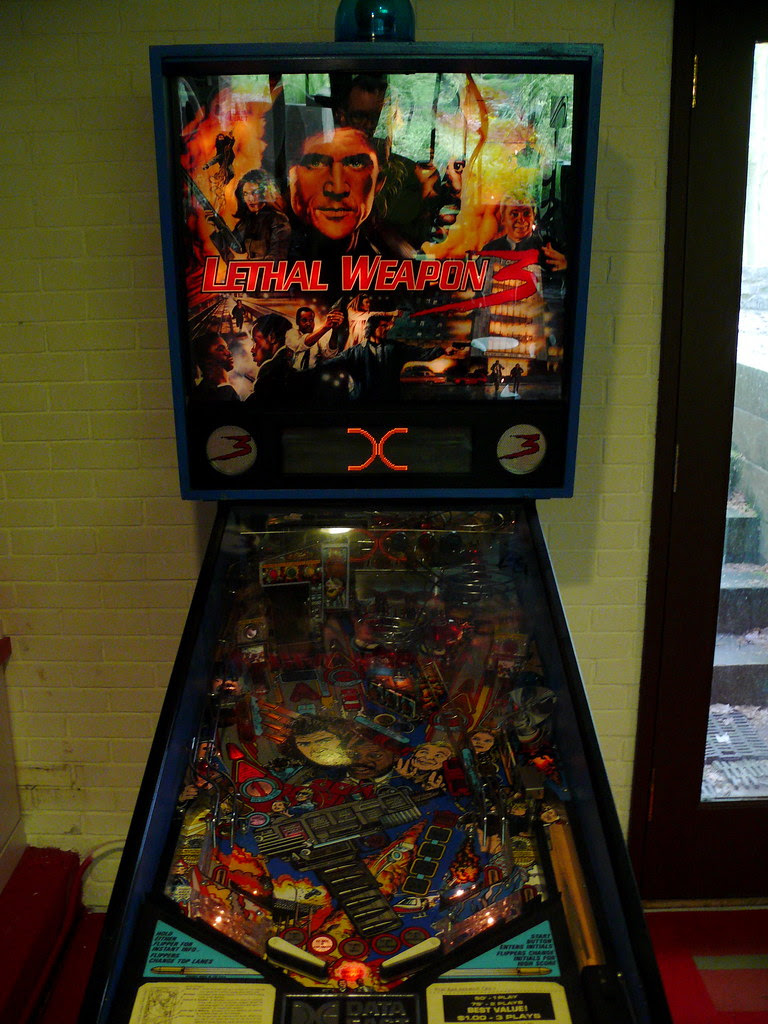 Mel sez: I got a bad reputation.

You sure do, pal. 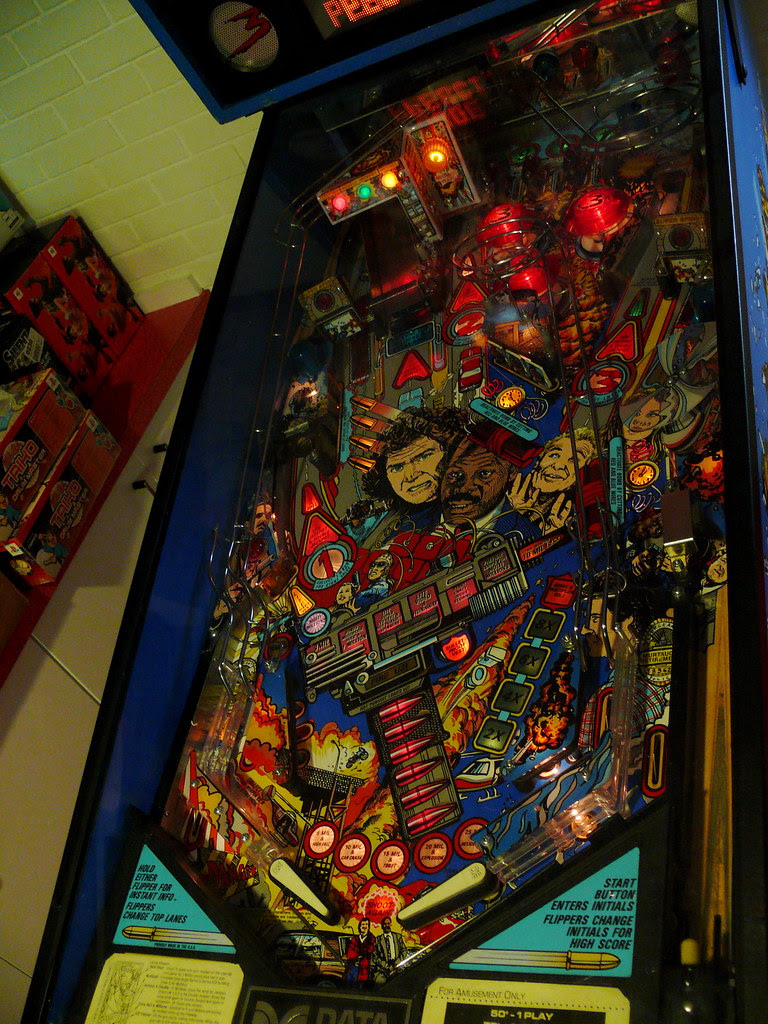 This may not be my dream machine (that would probably be Gotleib's 1982 Haunted House or Bally's Fireball) but this is still a lot of fun. Good table, lots of action, slightly odd license, but ok. Kind of an obscure table, but who cares? It's fun!
at 6:39 PM 1 comment: