We went to Universal Studios out here in Cali. It was a pretty fun way to spend the day. The studio tour is a classic, though from what I understand it was a bit more on the actual studio stuff back in the day. It was kind of sad to see the hole in the ground from where the studio fire was, but apparently they're rebuilding. (Of course, that says nothing for the mystery of what stored film or audio materials were lost, but I doubt that info is ever going to be readily available.)

The Simpsons' ride is really fun. It's a "flight simulator" type ride with the best looking CG Simpsons I've ever seen. Of course, there's a million in jokes for long time viewers of the show. I have to wonder how much of that was lost on the Japanese businessmen that were riding with us the last time through. 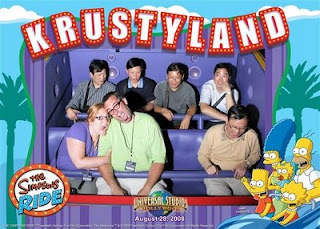 The Jurassic Park ride was fun too. It was really a typical boat ride with a huge drop, but it was done well. Some of the dinos are starting to show their age a bit, but other than that, it was pretty cool.

Saw the 3D Terminator 2 and Shrek shows and since I dig 3D stuff, these were cool. T2 3D has dated better than I would have thought, though it is kind of a 20 minute condensation of all the things ridiculous about those movies. (This might possibly have the highest density of Schwarzenegger quips of anything the man has ever done.)

We saw all the shows except Waterworld. The effects stage one was my fave. I think the effects show has the distinction of being the only thing at Universal that doesn't throw water in your face. They should put a sign up as you walk in reading "Welcome to Universal Studios, you will get wet." I'm not sure what that's all about, but it's interesting.

It was also interesting, but not surprising, at how little the classic Universal monsters appear in the park. There's the haunted house thing with the Frankenstein lab and there were Frankenstein and a rather good Dracula walking around. But for the most part, the movie monsters that were a huge part of the studio's legacy are kind of demoted to second tier.

The thing that got me the most about the day was that we could come in the middle of the week in non-peak season and still be surrounded by assholes. The park was nowhere near capacity. There was no need for people to crowd and push and be inconsiderate, but it didn't seem to stop anyone. Granted, I have a low tolerance for crowds, but even Kristen was ready to get away from people by the end of our stay.

And, I should mention that we went through the City Walk shopping district on the way out where I found this crazy bootleg Godzilla in one of the shops.

I'm guessing this is supposed to be meltdown G from Destroyah. Hard to tell as it's pretty off model. There was a smaller one (a little smaller than 6", this one is a little smaller than 12") that even had a tag with Godzilla and a shot from one of the movies on it! Pretty ironic that on the grounds of a studio well known for aggressively protecting it's own intellectual property, you could find some blatant rip-off of another studio's. (Doubly ironic when you consider Universal co-produced King Kong vs. Godzilla.)
at 12:15 AM