I didn't feel like going out Saturday night, but I felt like killing a few brain cells in a non-chemical related manner. So, I cooked up a fantastic (if I do say so myself) double bill of post-Star Wars coattail riders. Just in case you weren't around then, Star Wars inspired a ton of movies trying to cash in during the late 70s. Most of these are pretty bad, but they are usually amusing to watch. 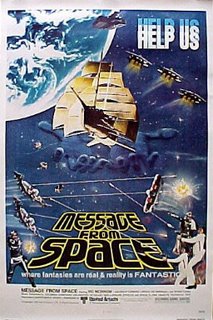 First up, I went with Message From Space, a 1978 Toei production with an international cast. Not a lot of star power here, though we get Vic Morrow as a boozy ex-army guy, the chick who played Sister Street Fighter in the Princell Leia spot and Sonny Chiba doing another cameo where he appears late in the movies, does a little swordfighting and is disguised so much, you can barely tell it's him.

Message From Space plays like a Japanese fantasy movie that happens to take place in space. The planet Jillucia has been taken over, so the elder throws these walnuts...err..."Liabe seeds" into space to find the people who will save their planet. His daughter Esmeralida (who is Sister Street Fighter) is sent to find them and avoid the bad guys, yada, yada, yada.

Of course the walnuts seeds find a standard issue "ragtag bunch of misfits" who have to come together and save the world. A lot happens in this movie and frankly it's difficult to get a grasp on everything. (This seems to be a standard feature of a lot of Japanese fantasy film I've seen.)

Here's what you really need to know: the story is cribbed from Seven Samurai, the ending is pure Star Wars, there's a "funny" robot sidekick (think Twiki with less charm) and the bad guys all look like metallic silver witches. The effects in this film aren't bad. They're not as good as Star Wars, but they're leagues better than, say, Fugitive Alien. 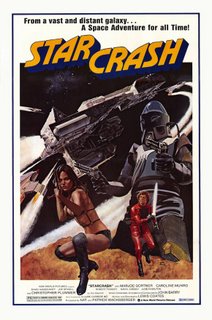 Next up, I went with a classic, Luigi Cozzi's immortal Starcrash. I hadn't seen this one before, and frankly was a bit skeptical about if it would live up to the hype. Well, let me tell you, it does.

Space smuggler Stella Star is out running space police with her humanoid(?) sidekick Akton when they come across a ship that had been attacked. They stop to check for survivors, and are pinched by the cop and his robot partner. After a day in hard labor (where Stella stages a prison break that results in the deaths of many other prisoners,) Stella and Akton are called upon by the Emperor to find a missing scout ship that was spying on the bad guy and just happened to have the Emperor's only son on it.

This flim follows the episodic serial formula kind of like Star Wars where they get in a scrape, they get out of it, then another one, then they get out of that, etc., etc. There isn't so much plot development as there is a goal and one thing after another on the way to attaining it.

Starcrash is a wonderful slpat of technicolor vomit on the screen. Who knew outerspace looked like a disco? Everything in this movie is a bright primary color, even the stars in outer space.

Not only is this fun to look at, but Cozzi tried damn near every effect avaliable at the time short of CGI. I mean, there's even stop motion animation in here, which I know isn't cheap or easy. Sure, the models look like random parts glued together and spray painted in stripes, but you can tell he was really trying to get it right.

And dig the John Barry (James Bond) soundtrack. Christopher Plummer as the Emperor? And David Hasslehoff??? (OK, maybe not Hasslehoff.)

There's a lot I love about Starcrash, but I think my two favorite things were Joe Spinell as the popeyed baddie Count Zarth Arn and his evil ship that looked like a giant palm with the fingers curling inward for an attack. Stella Star's spacekini wasn't bad either.

If you want to see Message From Space, you have few options right now. It's not officially out on DVD here or in Japan. It was out on VHS and it's not too difficult to find a DVD of that. Starcrash is out in both an official and "public domain" version. The official version is anamorphic at the correct aspect ratio while the PD is cropped and retitled Female Space Invaders. However, the color on the official version is very dull from all the screen shots and reviews I've seen. I went with the PD version. The panning & scanning isn't too bad and the colors are approporately loud (plus the disc is about a quarter what the official one costs. Personally, I feel having the colors right for Starcrash is most important, but your mileage may vary.

Fun double feature. Maybe I try a couple other Star Wars wanna bees this weekend.
at 11:07 AM