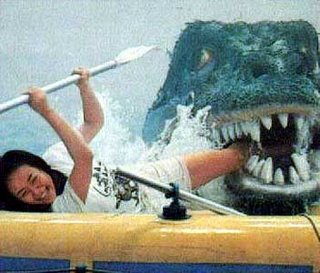 Environmental conditions have caused fossilized dinosaur eggs to hatch. The dinosaur terrorizes a small town near Mt. Fuji. Our hero rushes to the scene hoping to find the dino and reap financial rewards, but eventually seeks it as a way of finishing his father's (who was also a scientist and predicted such things) work. He finds the dino and it fights with a prehistoric bird. His girlfriend screams a lot. Fuji erupts and kills the prehistoric creatures and our hero and his girlfriend narrowly escape.

I wanted Legend of Dinosaurs to be good, but it just wasn't. The story, which combines elements of various Godzilla films, the Loche Ness Monster legends and even a pinch of Jaws, was just boring. The monsters were stiff and uninteresting. The characters sucked. Etc., etc.

There are three things of note about this film. In spite of this feeling like typical kiddie fare, it's actually pretty bloody in spots. A girl is ripped in half and a dinosaur has his eye gouged out. Plus there's a breif bit of nudity.

The second thing, and the one redeeming quality of this film, is the totally out of place cop show jazz/funk soundtrack. I really expected to see some Ford LTDs chasing through San Fransisco when the music got going. There's some great music in here, aside from the cowboy band (and all the horribly out of time clapping.)

Finally, this was the last film featured on Mystery Science Theater 3000 before it left it's local market and headed to the Comedy Channel. This was another of the infamous Sandy Frank's syndicated TV edits with terrible dubbing and vile panning and scanning.

WTF presents essentially the region 2 disc with subtitles, new menus and an isolated music track. The video quality is alright, better than the pan & scan version but nothing you're going to show off your HD TV with. I really have no complaints with the disc, I just don't consider it an essential purchase unless you're a kaiju completist.
at 6:13 PM

Rumor has it that this movie was made in order to cash in on the proposed (but never realized) Toho/Hammer coproduction, NESSIE. I've heard that the Toho-made Nessie prop got used in the movie, PRINCESS FROM THE MOON, though. You can see a picture of it here.

At the time of its release, "LEGEND" was the most expensive movie Toei had ever made!

I have to wonder where all the money went because it isn't on the screen.