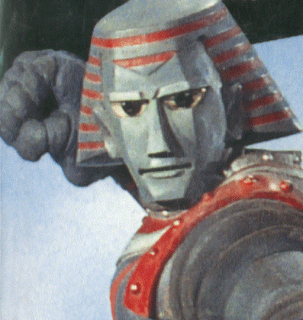 Voyage Into Space was a movie AIP assembled from five episodes of Johnny Sokko and His Flying Robot. Sokko was a very silly show where a group called Unicorn is defending the Earth against to Gargoyle gang led by the evil Guillotine. Unicorn's star agent is ten year old Johnny Sokko who, due to being in the right place at the right time, controls a giant robot called...err...Giant Robo.

Sokko controls Giant Robo with his wrist watch transmitter. This robot, who looks a little like King Tut, is apparently indestructible. He can fly, shoot missiles out of his fingers and lasers out of hit eyes. This is pretty convenient as Gargoyle keeps bringing new monsters down upon the Earth and only Giant Robo can defeat them.

Sokko is like the Uber-Kenny. Minutes after seeing Giant Robo for the first time, he knows all about it and knows how to control it completely. In true Kenny fashion, he becomes the proxy savior of the planet. One has to wonder how all the Unicorn agents who were working their way up paying dues have to feel about some snot nose kid coming along and because he just happens to have a robot, he becomes top agent.

There are a few things I'm curious about though. For one thing, I never understood why Unicorn always seems so reluctant to have Johnny call in Giant Robo. I mean, that always seems to be the option that saves the day, so why not just cut to the chase and bring in the Robo? (Yes, I know, the show would be about five minutes long otherwise.)

I also have to wonder why AIP called this Voyage Into Space considering there is no voyage and the whole thing takes place on Earth.

Budgets are low, stories are implausible and footage is recycled. Still, this is great fun if you dig seeing men in rubber suits wrestling around. These episodes work pretty well in movie form and I'm not sure for me anyway I'd really need to own all 26 episodes on disc.
at 10:06 AM

Orion Home Video released a couple episode volumes on VHS years ago. I don't know how many episodes got put out, but I know it wasn't the entire series.

I loved that show. Space Giants was my favorite. I also watched G Force and Spectreman.

Man, I'd love to see all these shows. It seems like Space Giants is familiar to me, but I really don't know why.