Review: No Blade Of Grass (WTF-film) 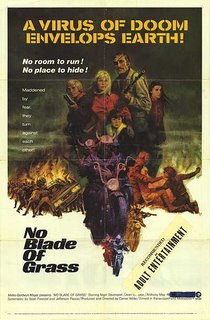 It's astonishing to me the multitude of ways fiction writers have come up with to end the world. No Blade of Grass is based on a book I haven't read, so I can't tell you how close it comes to that. The film version, however, plays a bit like Panic in the Year Zero, with famine caused by a grass/grain destroying virus being the culprit this time.

Nigel Davenport is tipped off by his daughter's government scientist boyfriend that London is about to go under martial law so they high tail it out of there to find his brother's farm in the country. Apparently being in the country has made the farm immune to the virus. The country almost instantly slides into kill or be killed mode and along the way they pick up a slightly unhinged weapons expert and damn near the entire population of a small village and fight bikers, army and farmers.

There's not a whole lot of set up to the story. The movie starts as the family gets the call to pack up and go and the previous year is detailed in a few flashbacks. While this is going on, we also get a few flash forwards to some terrible scene about to happen. In fact, almost anytime a character in the movie says something optimistic, scary organ chords break in and a clip of something violent yet to happen pops up flashing tinted red.

The flash forwards are interesting and keep you disoriented and on edge. Otherwise, there's not a whole lot happening here to build tension. Everything in this movie happens so nonchalantly, the electricity that a world sliding into anarchy would have never happens. There's also a love triangle that starts and fizzles out and there's the requisite environmental warning message interspersed periodically throughout the film.

I wonder how the book is because there are some good ideas here. It just seems like the movie gets it wrong somehow. It's not a bad film, and if you're into the apocalyptic environmental disaster thing, you'll probably want to catch this. I just don't know how much I could recommend others look for this rather obscure film.

WTF presents another reconstructed version on this disc. A majority of the film is from a widescreen print that looks pretty good, a little artifacting aside. There are a few more gristly scenes cut back into the print from what appears to be an Italian VHS source. I'm guessing the widescreen source was a cable showing, possible TCM as this is an MGM film. I'm thinking cable because of what was cut out (some nudity and a rape scene) and a few instances of language that are blocked out. The VHS shots are pan and scan and in the one scene with dialogue, it goes to Italian. It's a minor annoyance, better than not having the scenes in there.

Other than that, there's an image gallery on the disc and this time around, that's it. No complaints, just not the usual bounty of extras WTF puts on their discs. If you can't wait for TCM to show it again, or you want it unedited (even with an aspect ratio and language change,) this is a nice disc to own. Not the best movie I've ever viewed, but it was decent enough and it fits in with the WTF collection quite nicely.

And this is the last of my WTF reviews, at least until they put out a new disc. To sum up, I don't know who is behind these releases, but it's obvious it's someone with a love of film. There's more going on here than your standard bootleg. I look forward to whatever they put out in ther future.
at 10:05 PM

"A majority of the film is from a widescreen print that looks pretty good, a little artifacting aside. There are a few more gristly scenes cut back into the print from what appears to be an Italian VHS source. I'm guessing the widescreen source was a cable showing, possible TCM as this is an MGM film."

I can at least confirm that TCM did indeed air a WS version of this a few months back, and the version aired does sound like what you describe, thus your guess could probably be right.

Figured as much. When I was researching this film (and World, Flesh & Devil froma few posts back) I found entries on TCM's site. Makes me wonder why if they're sitting on a good looking print, ready to roll, they don't slap this on a DVD. It'd be a great Midnight Movie title.

I think I really just need cable and a TiVO. I could probably cut my DVD purchasing in half.