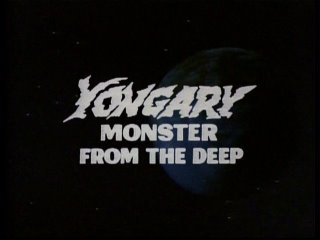 Being a fan of Gamera means you often times catch some flack about how cheesy the movies are. I'd argue part of Gamera's charm is the fact that the films are so darn cheesy. But, let me tell you this, if you're lactose intolerant, stay far away from Yongary. It's a whole week's worth of dairy in one serving. 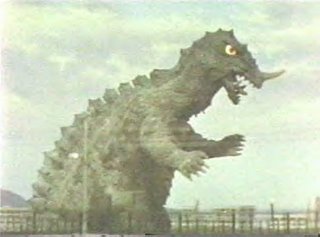 Meet Yongary. He's our new exchange monster from Korea (though, according to legend, he has some Japanese blood in him too.) As you can see, he kind of looks like someone took Godzilla's body, stuck Gamera's head on it and then put a rhino's tusk on the nose just for fun. Admittedly, suitamation in 1967 (the year kaiju broke) was on the down swing quality wise, and the Yongary suit looks at least as good as that year's model of Godzilla and Gamera suits.

Much like the cobbled together suit, this movie is also cobbled together. If you take the bulk of Godzilla (the movie) and graft on the Kenny from Gamera, you've got Yongary's basic plot. And this is the first kaiju movie that I think was written by a ten year old Kenny, as there's just little going on here that makes much sense.

A mysterious earthquake is moving across Korea as a result of Chinese nuclear tests. It turns out the earthquake is actually Yongary who can borough through the ground. Yongary emerges to drink some gasoline and stomp some buildings. Ichio (our Kenny) observes Yongary itching after coming in contact with some sort of ammonia compound. Our hero dump a ton of the ammonia on the monster, causing severe rectal bleeding (you think I'm making this up?) and a disturbingly realistic death scene while Icho waxes reflexive on "did we really have to kill him?" 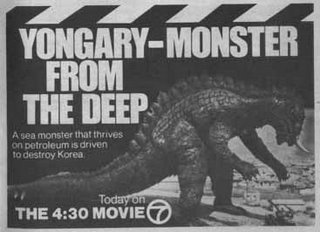 Now, I can't catalog all the things just plain wrong with this film, so let me just list a few:

You get the drift.

Ichio in this film is downright sadistic. We're introduced to the itching ray early in the film as he uses it to pull a prank. When he's caught and informed he almost caused his victims to scratch to death, he responds with "yeah, but you gotta admit it was funny."

Later, Ichio sneaks out to get a better look at Yongary. You think he's going out there to make friends with the monster, but no. He's brought the itching ray again! While he's sending the monster in to a fit, he takes delight in the fact that it looks like he's dancing. (A rock version of a Korean folk song starts playing. Words can not describe how bizarre it is.)

Finally, Ichio sits there watching Yongary's painful death shakes with a big shit eating grin on his face. Why he pulls the last minute introspection bit, I don't know. It really seems half hearted and despite what he's saying, he doesn't seem too broken up to see the monster die.

Then there's Yongary's stunning special effects. You don't need to look closely to notice things like a flame thrower nozzle in Yongary's head or an extra wheel balancing a cut in half jeep. It seems cardboard boxes were used extensively in this film representing everything from bricks to models of buildings. There's also horrible matte shots and the worst blue screen effect I've ever seen.

Alpha has taken their disc from the old pan and scan VHS. It doesn't look bad and since this is a pretty horrible movie that everyone assumes is public domain, I doubt this is ever going to get a better DVD release. This movie isn't for the purists anyway.

It's been a while since a movie gave me this many unintentional laughs. Well worth the $5 or whatever this disc will set you back.

Here's box art from a couple of super 8 digest versions of this movie. As with all the pictures in this review, I've shamelessly lifted these from other sites. (Thanks Stomy Tokyo, DVD Drive-In, Shill Media...) 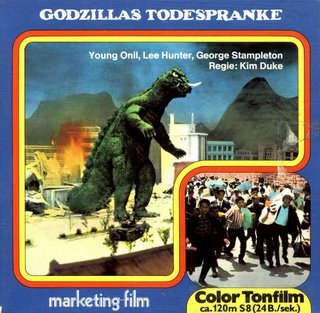 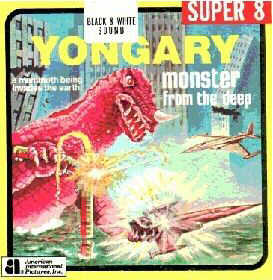 The restored widescreen version from MGM occasionally plays on cable. For awhile, this version made people assume that YONGARY was going to get released under the Midnite Movies DVD line. Sadly, Sony seems to have destroyed any chance of that happening.

That's crazy to me that someone would actually put the time into a restored version of this film and then not put it out on DVD.

I just rewatched my taped-off-cable copy of YONGARY and realized that it's full frame. My bad. The quality's definitely better than any Alpha DVD I've ever seen.