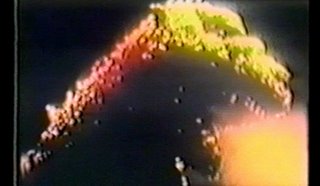 If you've been following along on my blog, I'm sure you're aware that I own a lot of obscure videos. I think of all the off the beaten path stuff I've come across, this has to be one of the most obscure and strange things I own. In fact, about the only information I've found about just what the heck it is comes from the source I got it from, WTF-film.

And this disc really made me go WTF.

Starting with Godzilla, King of the Monsters (the US version of the first Godzilla film with Raymond Burr,) Cozzi decided to play up the whole Godzilla as an allegory for nuclear war angle. A prologue was created with World War II footage. War footage was spliced into effect scenes, which were completely re-edited.

To top things off, the entire film was color tinted using a process he called Spectrorama 70. The soundtrack was also remixed into a Sensurround like process. The end result apparently ran about a half hour longer than it's source material, though the version featured here is about 88 minutes. Apparently this is a broadcast version of the film.

Like most things Luigi Cozzi did, this seems to have the best of intentions behind it but is just so wrong headed, it's almost amazing. Though the US Godzilla, King of the Monsters does down play Godzilla being a product of Hiroshima (after all, the US dropped the bomb in the first place,) Cozzi absolutely hits you over the head with it. Again and again, WWII stock footage interrupts effect scenes and spoils the pacing in an already edited (and compromised) version of this film.

The colorization is like blobs of yellow, red and blue are placed on your TV. The effect is totally garish and weird. Characters end up having blue faces against a yellow sky.

Unlike all the other discs I got from WTF-film, this one doesn't have artwork or even a menu. I think it's safe to say this is a work in progress because according to their website, they're working on a recreation of this film.

I suppose that's a good thing because this disc is really difficult to watch. The video master used for this disc looks several generations removed from the film and has severe damage during Godzilla's attack on Tokyo. Everything is smeary and blurry. Given the rarity of this film, it's doubtful a better version is going to turn up.

It's also worth mentioning that this disc is in Italian and is not subtitled. Probably not that big of a deal, as I'm sure only people who have Godzilla memorized are going to seek this out anyway.

And that brings me to the bottom line. I really can't recommend this disc to anyone but the most curious, hardcore Godzilla fan. Cozzilla is an interesting curiousity, but watching a poor quality video of a crudely colorized and bizarrely edited version of Godzilla is probably not going to appeal to many people.
at 9:56 PM

Actually have this uploaded in full in the media section of my site. Cheers!

And subtitled, no less!