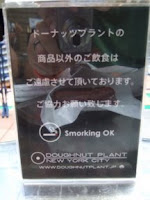 Smorking OK after a long day like we had. Lots of traveling, more rain, less English. 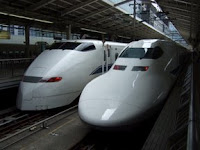 To continue my last post, here's the bullet train. Ours was on the right. This thing really moves, and it's smooth as you can imagine. It didn't feel like the trip took any time at all, when in fact it took nearly three hours. 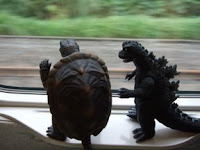 As you can see, Godzilla and Gamera are busy checking out the scenery. When we weren't in a tunnel, there was some nice country side to look at. Most of it was going by too fast to get any worthwhile pictures of, but that didn't stop me from trying. In fact, I did catch this interesting shot. 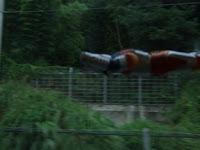 Seems someone forgot to climb in the luggage and had to make it to Kyoto on his own.

So, here we are in Kyoto. It's a lot less English friendly than Tokyo, but we're still getting around ok. Tokyo is super modern, but Kyoto is a bit more on the old side. It looks more like the stereotypical Asian city you think of with wooden buildings, narrow streets and electricity wires running everywhere. 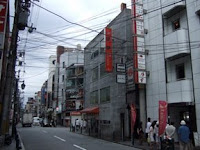 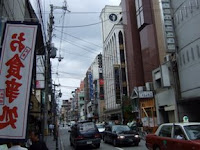 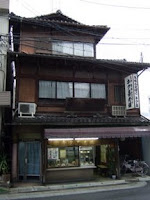 The hotel also has the most complicated toilet I've ever seen. 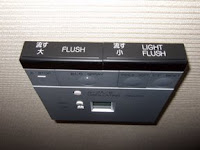 The bottom thing flips down to reveal about half a dozen buttons that do things I just don't understand. All I want to do is just do my business and leave, but apparently the Japanese have elivated that to an art.

Anyway, we walked around a bit. A long bit, as it was. Ate lunch at a Korean place where there were no English menus and I haven't the foggiest idea what either of us ate (she had a soup of some kind, I had fried rice something. Both were very good, actually.)

After lunch, we walked around some more. Then the streets started filling. I think I mentioned this festival going on? Well, the people were coming in droves and pretty soon, it was like a wall of people moving through. Kristen tired earlier than I did, which is a strange thing as it's usually the other way around.

Took a subway, took a cab, got back, ate dinner and here we are. I got more to tell, we went to a Namco Wonderland arcade, ifor instance, but it's going to have to wait. I'm about falling asleep as I type this, so until next time...
at 8:45 AM

Heh, I just instituted a strict no smorking policy on my blog. :)