The Road Most Taken 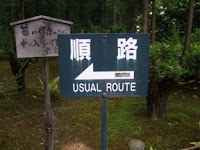 Today was a little less hectic than yesterday. Though we'd intended to see the big parade, we didn't make it. Sucker started at 9 and was long. Though we've been getting up early, today we took it more on vacation time. I think we both needed it.

We finally did some touristy thing as we took the day and visited temples and historical sites. Our guide book said we'd be able to do all these things in a matter of three hours or so. It tooks us about four hours to do just two and we had to rush through the third as it was closing. Bummer.

I won't bore you with all the details. Sooner or later I'll buy a Flickr account so you can see the million or so snaps I took today. However, I'll give you a taste of what I did on this day of my summer vacation. 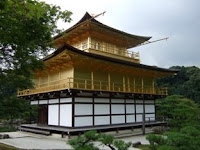 That's the Golden Pavilion. Bet you'd never have guessed. This is part of the Rokuon-Ji Temple. There was a lot of pretty greenery to see and a nice little shrine area where Kristen and I lit candles. 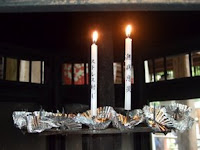 Hers is "alleviate stress." Mine is "be very fine." 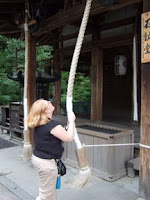 Kristen rocks the bells at the temple like her name was LL Cool J.

From there we went to the Ryoanji Temple, famous for steakburgers it's rock garden 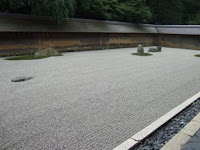 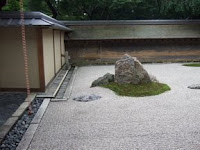 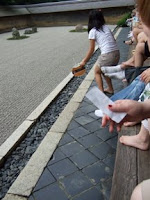 where I had this moment of zen: 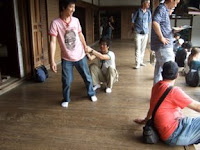 Then we hit the Old Imperial Palace Ninna-Ji which since it was the largest place, we got there twenty minutes to closing.

We both fell in love with this orange pagoda, though I haven't the foggiest what it is.

Then there was this thing. It was pretty.

I'm very sorry I can't tell you more about the palace. It was absolutely awesome, but we were literally sprinting through the place, taking pictures like mad as we went.

Speaking of pictures, Japan has got to be a photographer's best friend. You can point your camera anywhere, at anything and come up with an interesting image. Old or new stuff. Trees, people, vending machines. This is maybe the most visually interesting country I've been in.

There's the menu in English. It's smaller than what they have in the US, but it gets the job done. I made it a point to order the weirdest thing on the menu, so I had the EBI Filet-O. Essentially it's a Filet 'O Shrimp. It was delicious.

We also had these Mango Pies.

Unlike the US pies which you could cut diamonds with, these were light and flaky and yummy.

I think we're getting ready to go back out (it's only 6:17 PM here) so I'm going to wrap this up. I forgot to take the critters along, so here's a gratuitous shot of Jet Jaguar conquering the room decorations: 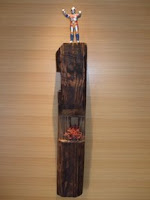