Behind the Brown Door 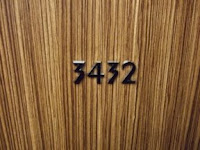 Konichiwa! There's some of that fine Mary Tyler Moore font I promised you. Yeah, that's our door. We didn't see much of the room today as we spent most of the day getting rained on in Akihabara. Thanks weather. Anyway, two geeks in the electric capitol of the world were probably need more than a little rain to slow us down. 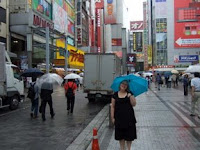 There's Kristen just after we got of the train. You can start to see a little of the insanity in the back ground. The only way I can describe it is if you've seen Blade Runner, it's pretty much like that, without the artificial animal shops. 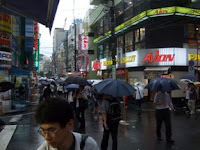 That was just a random street corner. Nothing really special, but just a typical image from the street. We hit it at about 10:30 and didn't leave until 6. Stores were packed solid with people and electronics. Of course, everywhere I went, I was wishing I'd paid a little more attention in those ten hours of Japanese I took at IUPUI as it is a little tough to look for the stuff I was really after (such as videogames.) 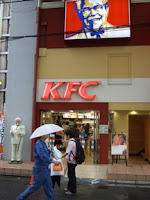 Konchiwa Sanders-san! Am I the only one who thinks some Japanese men start looking like Colonel Sanders as they age? Kind of like US guys looking like Kenny Rogers. Hmm...they both had chicken restaurants. Coincidence?

So most of the stores don't allow photographs, ironically enough. I had to sneak a few, like here, look who is thinking differently: 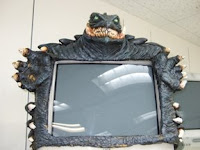 Sadly he wasn't for sale. (Gamera is humping an old iMac, in case you couldn't tell.)

One of the fun things I dig even at home are capsule machines. In Japan, they really know how to do them right. 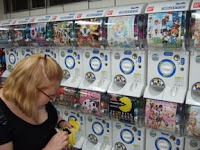 Kristen is getting ready to drop some yen in the wall of machines we found in one store. 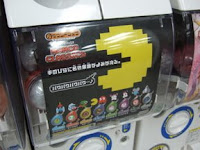 This Namco machine was my favorite. We tried in vain to collect 'em all. Collect what? you ask: 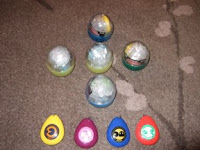 Alright, you can't really tell from the picture, but they're keychain fobs that make noise when you press the button. So the Pac-Man one does the wacka-wacka thing, Dig Dug makes the pumping sound, etc. I still need a Xevious...grrr.

That same store had tons of toys and I picked up a few: 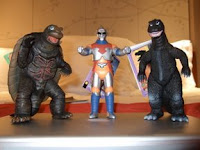 Look! It's Gamera, Jet Jaguar and Godzilla in his '68 comeback flavor! w00t! I was wishing I was more into Ultraman, because this store had so much Ultraman crap, I just wanted to start buying stuff even though I had know idea what it was.

I won't bore you with everything we bought, but here's a highlight: 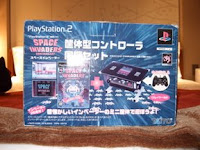 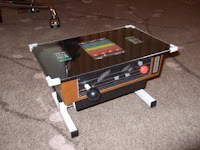 You stick a dual shock in there and play it like an old Space Invaders cabinet. Totally silly, but I had to have it and got it cheap used (750 yen!) 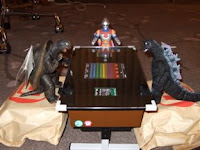 As you can see, I'm putting it to use immediately to broker a peace accord between Gamera and Godzilla. Rather than trashing Tokyo, they're settling their differences over a game of Space Invaders. Jet Jaguar has a quarter up, though no one really takes him seriously. 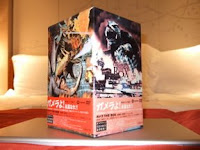 Speaking of Gamera...should I feel shame for dropping some serious coin on the first four Gamera movies? Why do I love them so? Why are the crummy pan & scan "public domain" versions we have at home not good enough? Further more, why am I now determined to track down the remaining three discs I need to finish this set. *sigh* 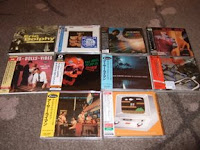 Here's my CD haul for today. I love Japanese reissues, as they tend to do them right. The mini-LP covers are the bomb and I'm noticing what started out as just a jazz thing is moving to all kinds of music as well. However, it's just the jazz I'm after. Highlights of this include Dave Pike and Les De Merle discs I've never seen and, though it pains me to rebuy anything, I finally have another copy of 1969Miles, which is my favorite Miles CD ever. I'm not letting this one out of my sight, as my first copy walked. Kristen bought some good CDs too but I'm sure she'll talk about that over on her blog.

Rob, It sounds like the two of you are having a blast. Can't wait to hear more at home and see all your toys. Keep the posts coming; Joe and I are loving them. Carisse