Yet another Grindhouse review. 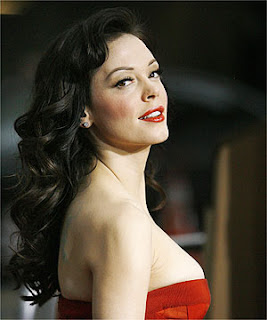 Because this is one of those films that really seems to have people divided and is inspiring a lot of passion in movie nerds, I feel I should kind of break down where I'm coming from before I get into Grindhouse. First off, if you just stumbled in here, I am certainly a fan of the grindhouse cinema. I get and appreciate where this is coming from.

I'm fairly neutral on Tarantino and have no opinion on Rodriguez. I also went into this movie as blind as possible. I purposely didn't watch trailers, read up on the hype, etc.

With that out of the way, let's start.

Part One: Planet Terror. The government has created some sort of green mist that is turning people into pus filled zombies and a paramilitary group is after it. A mysterious guy fights with the hard nosed local law to save the world. His stripper girlfriend finds her true self in all the chaos.

Sound familiar? It should.

Planet Terror's story is appropriately convoluted and it almost all comes together in the end. Still, the story is secondary to the action, and Planet Terror is almost wall to wall action. By the end, it's obvious Rodriguez has kind of painted himself into a corner, but it really doesn't matter. If I had a dollar for every genre picture I've seen with a burn out ending, I'd be filming one of my own.

The one thing that seems to really have gotten the film nerds up in arms about Planet Terror is the use of CGI. Despite the artificial aging, this is obviously a modern film and I don't really think they were trying to hide that fact.

Imagine if Cannon Pictures invented a time machine, zoomed from 1982 to now, brought back some CGI technology (and a bit of 2007 budget,) gave it to Cozzi or Fulchi and told them to go nuts. Part homage, part parody, Planet Terror is every over the top 80s action/zombie gross out/horror flick you've seen refashioned for today.

It's silly, it's gory, it's loud and all action. Yes, Rose McGowan with a machine gun for a leg is ridiculous, but it's supposed to be. So many of these films were ridiculous.

Planet Terror was huge fun and exactly what I expected from Grindhouse. 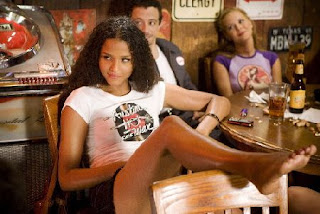 Part Two: Death Proof. Where to start? I know what Tarantino was going for. I know he loved all the old AIP/Crown car pictures. How do I know that? Because the characters in Death Proof make explicit* reference to such genre classics as Vanishing Point and Gone In 60 Seconds (the original) when they aren't gabbing on and on about sex.

There's also an element of the rape revenge film, though there's no sex at all here. In fact, it's really difficult for me to understand what Kurt Russell's heavy Stuntman Mike was after here, because there was zero character development for him. All we know about him is he stalks these girls, kills them with his car and then breaks down like a little baby instantly when the table is turned.

And it's not just Stuntman Mike who is underdeveloped. In between a couple of rather uninteresting car chase scenes, there's talking, lots of talking that never really advances the plot or the characters. None of the characters really amounts to much, despite all the gabbing they do. Never once do you develop any interest in them and personally, I kept hoping Mike was going to manage to off the chicks in the end after all. Considering Quentin is trying to make this a character driven film, allowing the character to grate as they do is a big misstep.

If Quentin was trying to duplicate the tedium of some of these genre pictures, mission accomplished. However, I think true grindhouse audiences wouldn't have had the patience for this one. It's like when Death Proof is not trying to be a car chase/female empowerment film, Death Proof becomes some film school version of French New Wave and it just doesn't work.

So maybe I don't get Death Proof, but what I saw was a boring mess of a film. How Tarantino managed to make a film with hot chicks talking about sex, car chases and Kurt Russell dull, I don't know, but he did it. I'll say this, if you love that famous "Tarantino dialogue", you're going to adore this film because that's about all there is to it.

Bonus features: The fake trailers are pretty good. Thanksgiving and Don't are brilliant. I expected a little more from Rob Zombie's take on the Ilsa/Olga naziplotation genre though.

So, in the end I'd pass on the same advice I got going into this: you can safely leave after the trailer for Thanksgiving and feel like you got your money's worth. You really won't be missing much.

* I half expected the film to stop and Quentin come out and explain "Ok, in the next scene, I'm referring to..." It was almost insulting the way the character come right out and tell the audience what films Tarintion is paying homage to.
at 5:23 PM