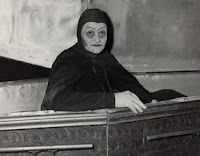 Check it out here!

I don't know why I hadn't thought of checking YouTube for Sammy Terry clips before. Luckily there's a ton of stuff up there now. Prepare to waste most of a day going through all that good stuff.

For those who don't know, Sammy Terry was Indy's Shock Theater host who aired on WTTV from 1962-89. Not as well known as Svengoolie or some of the others, I think he's every bit as good, if not better.

I have a lot of good memories of not just the show, but also taking music lessons at Family Music, which was Bob Carter's store on the East Side. He stored some of his Sammy Terry props in the back room above the drum set. I never got enough nerve to root through there and see if George or Skull was lurking just above my head.

Anyway, for my Indy readers, hopefully this will take you back and everyone else should check it out and see what we grew up watching. Man I miss locally produced TV. You just don't get this kind of entertainment anymore.
at 9:10 AM

since you seem to use You Tube a lot, perhaps you can help me--I can no longer get sound from YouTube videos or Google videos-a weird red line runs across the bottom of the films--now if it is animation, I have sound, and if is someone's own video, I have sound. This only happens with the two I mentioned. What do you think? Sounds weird, I know!