Sly & The Family Stone - The Collection 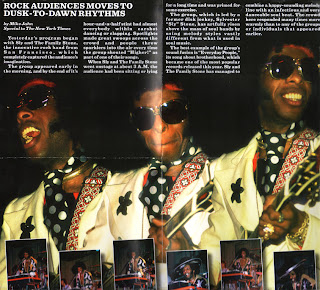 OK, this is going to be a quick review here of the new Sly & the Family Stone set from Legacy. This isn't really a box set as much as it is all seven of the recently remastered Family Stone albums boxed and sold at a cheap price (I got mine for $50.) These discs are all available separately, though I'd suggest springing for the whole set. There's at least four solid classic albums in there and the other three aren't that bad either.

While people constantly crab about how the Beatles catalog needs freshening up, it still amazes me at how shabby other acts of the era have fared on CD. At least you can get all the Beatles albums on CD and they have a semi-respectable replica of the original artwork. Small Talk was only available on CD in Japan until this reissue series and the covers for There's A Riot Goin' On and Dance to the Music were butchered horribly. And the sound, well, I don't even think it was near state of the art when these discs were first released.

These new issues restore all the art work in a digipack and feature spiffy new mastering jobs. I'm sorry they didn't go the hybrid SACD route like they did with the recent Bob Dylan set, but these things sound excellent. Though I still haven't combed over everything with a fine tooth comb, I can't find anything really to complain about there.

However, I do have one major beef. Legacy has thrown on a handful of bonus tracks and 45 mixes, all of which are appreciated. What I don't understand is why they couldn't have thrown on the three crucial single only tracks recorded between Stand! and Riot. It really aggravates me that I'm still going to have to buy a hits collection to have "Thank You (Falettinme Be Mice Elf Agin)," "Everybody Is a Star" and "Hot Fun in the Summertime," easily three of the band's best tracks. There was plenty of room to include them and no reason not to (except the desire to make fans shell out for one more disc.)

The other thing I'd like to see is the couple of non-Family Stone Epic albums finally get a CD reissue (though I've heard they aren't very good) and, just to be complete, how about the ahead of it's time remix album Ten Years Too Soon? Still, thanks Legacy for finally doing Sly & the Family Stone Right. This is some essential music, highly recommended.
at 9:48 AM

You forgot to mention that it's a highly limited edition, and therefore my local Best Buy and Borders are already sold out. Gad dammit.

I plan on heading out and buying Riot next Tuesday. On my list of Greatest Albums Of The Seventies, it occupies the first 11 spots.

Found mine at Indy CD & Vinyl on 20% off sale day. I believe that makes me cool and such.

Making my way through the first album so far. Sounds fantastic.