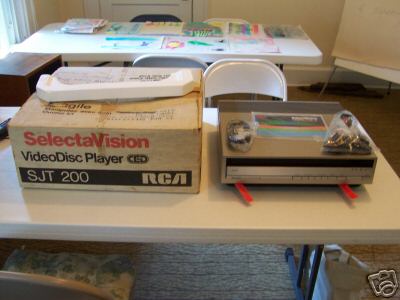 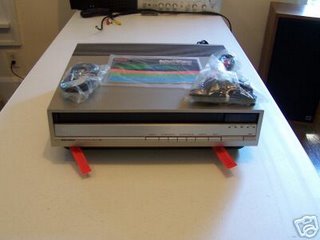 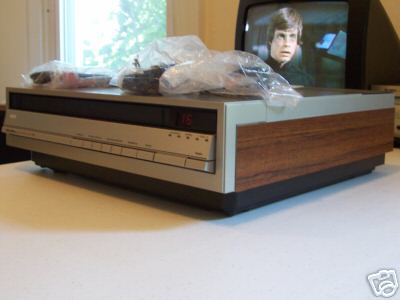 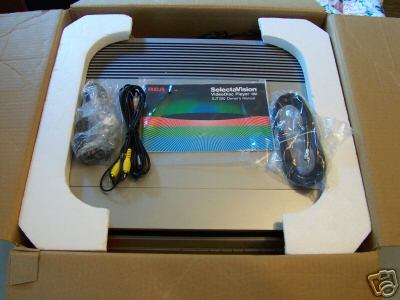 So, that's my new toy. As I've gotten older, I realized I can now buy all the cool junk I wanted when I was younger. Mostly that's meant I've owned nearly every videogame system ever, but I have gotten into the A/V equipment as well. So, along with my quadraphonic system, reel to reel and 8-track recorders, I now I own a CED player.

The specific model I have, as seen above, is a SJT 200, which was kind of a middle of the road model. Yeah, that's my actual player in the pictures. It belonged to a former RCA executive and was serviced before I got it by an ex-RCA technician. I paid a pretty penny for it, but it's about as close to brand new as I'm going to get at this point in time (plus it was local, so I dodged the shipping bullet.)

What, you may ask, in the hell is CED? Well, it was an early video playback system that used a 12" disc (encased in an oversized plastic caddy) and was read by a stylus. In other words, it's a record that plays movies. The difference being, the groove is extremely fine and the stylus are no longer being made (though they are still available as new old stock.)

What CED isn't is laserdisc. People commonly confuse the two, but there's no laser involved here. It's just a needle in a groove, exactly like a audio record, though the actual nuts and bolts of it is a bit more complicated.

Quality wise, when everything works properly, it's better than VHS but not nearly laserdisc. Since there is a stylus in the groove, dust and scratches can play havoc with a CED disc. The plastic caddies seem to do a good job protecting them, but I've had skipping in all my discs I've played so far at least on the first play. Usually on the second pass, it plays clean.

Development on CED started in the early 70s, but it was manufactured from 1981-1984. Disc production continued until 1986. My player is from 1983 and is part of the second, and final, generation of RCA players.

My personal feeling about the format is, had it come out in the late 70s, it would have been a much bigger success than it was. The discs weren't that expensive, especially compared to what pre-recorded videotapes sold for at the time. The problem was, by the time CED made it to market in 1981, the videocassette rental market was starting to pick up and VCRs were starting to drop in price. Laserdiscs, while never becoming more than a niche item in the States, also had a 3 year jump on CED.

Growing up in Indianapolis, where RCA used to be headquartered and where CED discs were made, I saw these things everywhere. I knew several people who worked for RCA growing up and they had CED players. I still find the discs at thrift stores quite often, which is what got me started on collecting these discs in the first place.

Nostalgia and avaliability are two things that got me interested in this. There's also several movies not avaliable on DVD that you can find on CED, and usually for cheap. (The paradox of CED collecting being, the discs are nearly worthless while working players are worth their weight in gold.) I'm also fascinated with quirky old technology, of which the CED system certaintly qualifies.

So that's CED. I'd point anyone interested in more info to CED Magic. It's a pretty thorough site about the format.
at 9:45 AM