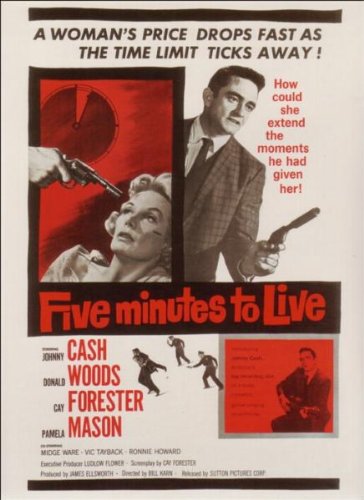 OK, I want to start off my reviews here with a fresh one. I picked this disc up a while back courtesy of the Family Value Collection of discs that seem to be exclusive to Dollar Tree. YMMV on finding a copy now, this seemed to be another "blink and you miss it" type of release, possibly for legal reasons. (Note: that's total speculation on my part based on what I know about the Family Value Halloween dvd fiasco of last year and a few educated guesses of my own.)

Alright, the disc in question is a flipper featuring two of Johnny Cash's movies. These films feature Cash in dramatic roles so anyone expecting music performance of a documentary is probably going to be disappointed. However, video quality aside, this is one of the more enjoyable dollar DVDs I've screened in a while.

The first side of this double feature is "The Pride of Jesse Hallam," a 1981 made for TV movie. In it, Cash stars as an illiterate ex-coal miner who moves to the big city (of Cincinnati!) to get medical treatment for his young daughter. The film follows his trials and tribulations both as a fish out of water and as a grown man who can't read. Like many TV movies, Pride tends to be a bit maudlin and the supporting characters are fairly two dimensional. I think the only way Jesse's boss could have been more stereotypically Italian would have been to give him a velour track suit, gold chains and a pizza parlor. Cash, however, is quite engaging as Hallam. I put this on and thought I'd just watch a few minutes and flip the disc, but I actually got into the story, largely due to Cash's performance. Not a great movie by any stretch, but enjoyable enough.

For most people, the flip side of this disc is going to be the main attraction, as it was for me. What we have here is "Five Minutes to Live" (1961) (aka "Door to Door Maniac",) a completely sleazy thriller staring Cash as cold blooded killer Johnny Cabot. The film is basically a flashback with Cabot's partner in police custody telling the story of how he roped Cabot into his bank robbing scheme. The plan involved holding a bank manager's wife for ransom and most of the movie is Cash playing cat and mouse with this poor woman. Cash is downright sadistic in his role here, glowering and menacing his way through the film. Even when he stops to play a little guitar (I guess it's standard for a kidnapper to bring his axe on the job) you have a feeling he could snap and do something really crazy. This probably isn't a role the Cash family would like Johnny to be remembered for, but there's no denying that for fans of trash cinema, this is a winner.

As is standard for most dollar DVDs, quality is a bit sketchy here. "Pride" doesn't look too bad. It appears to be taken from an old 16mm print and though it's a little dark and a little worn, I've seen a lot worse. "Five Minutes" unfortunately is a bit on the headache inducing side. Basically, "Five Minutes" looks like an average quality VCD of a VHS tape. The image is very soft and there's a halo effect around most objects indicating a low bit rate encoding.

I'm a little suspicious as to the legal status of these films as well. "Pride" has appeared on other public domain discs, though I'm willing to bet the soundtrack is still copyrighted (there's four Cash studio recordings featured in the film.) "Five Minutes" was originally released by Sutton then reissued by AIP in 1966. A lot of AIP fare has become public domain, but considering Bear Family put out an authorized version of this (as a pricey import,) I'm willing to bet someone still holds the rights to this one. Like I said, this is nothing but speculation on my part, but I'm guessing the legal status of "Five Mintues" may have something to do with why this disc disappeared so fast.

Video quality aside (and at this price range, you get used to pixelated video,) this is a pretty killer double feature with one good film and one great one. "Pride" may be a bit more difficult to watch if you're not a Johnny Cash fan, but "Five Minutes" is an unheralded trash classic that anyone who appreciates cinematic sleaze should enjoy. Recommended, if you can find it.
at 10:10 AM

Collector's Choice Video (www.ccvideo.com) also had a version of this they were selling for about $6.99. Not sure if they still have it available. I wonder how the quality is? For a dollar, few people are gonna complain about VCD quality, but for seven bucks, that ain't gonna fly in 2006.