You can't deny Universal Studio's might in the world of monster movies. Dracula, Frankenstein, the Mummy, the Creature and on and on and on. Classics all. Then you discover something like this lurking behind the Universal globe and you have to wonder what the hell they were thinking. Were they trying to fill the lower half of a double bill and didn't feel like re-running one of their classics? Was the market for Z-grade flick like those that Astor and Lippard cranked out that lucrative?

Anyway, the key with these bottom of the barrel monster movies was suspense and advertising. Give the movie a name like "The Thing that Killed" or "Hell Creature of the Sky" and keep the audience guessing as to the creature looks like. Of course, it's going to be silly and cheap, but there was always that anticipation that it might be scary. However, even the title of the Deadly Mantis gives it away, so when the characters spend half the movie trying to figure out what's taking down airplanes, we already know.

Aside from that, you can go down the Z-grade monster movie check list and pretty much check the box by every cliche. Three main characters; scientist guy, military guy and reporter girl. Check. Cold war underpinnings? Check. Atomic energy as the trigger? Check. Narriator? Check. Copious stock footage? Yep. Giant bug? How's this guy for ya? 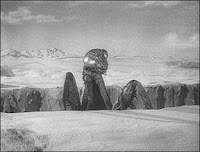 I know a lot of people like to take the piss out of Bert I. Gordon, but watching this movie seriously makes one appreciate what he could do in the giant bug genre. I'm not going to suggest Mr. BIG was a great filmmaker, but you could never accuse him of being less than entertaining. I fell asleep twice during the Deadly Mantis. No lie. There's only so much army stock footage a man can take.

Anyway, I'm sure you're all going to want to run right out and secure a copy of this for your very own, so let me tell you a little about the DVD. As usual, WTF-film does a great job with the disc. From cover to menus, the whole thing looks great. The transfer (which, I'm assuming comes from the old Universal Sci-Fi laserdisc set) is slightly windowboxed full frame and looks really good*. This looks about as good as the Sci-Fi set Universal put out last year and has extras (trailer and photo gallery) that Universal didn't bother with to boot. Unless they decide to put out another Sci-Fi collection, I think this is going to be the best way to own this movie, even if I can only really recommend it for genre completists.

Available from WTF-film. Use coupon code cdr10 at check out for 10% off.


* note, if you were reading message boards around the time Universal released This Island Earth on DVD, you'd know there's a ton of controversy over the correct aspect ratio for the Universal Sci-Fi and Horror films of this era. I'm in the camp that believes these were meant to be cropped to 1.85:1 widescreen, but transfers like this that are full frame rather than pan and scan don't bug me too much.
at 9:36 AM

I used to really dig this as a kid, but I've lost most of my appreciation for it since then. Even with a running time of under 80 minutes it really drags. This is the least interesting of Universal's scifi pictures from the time, in my opinion. It's a pity really since the giant mantis itself doesn't really look bad at all...

As for the aspect ratio - this would have been filmed in open matte and shown 1.33:1 in some theaters and in cropped widescreen in others. The shot composition is loose enough that either is perfectly acceptable so which aspect ratio is more appropriate is really dependent on the personal taste of the viewer.