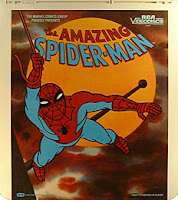 One of the fun things about owning so much crap is, it's very easy to forget what you have and when you discover something, it's like Christmas. That was how I felt the other day when I was rooting through my CED box and found a disc of '67 Spiderman cartoons. Last night I got to spend a little quality time with the RCA SKT-200 and completely got sucked in to the Spiderman disc.

Now, I never really was a comic book nerd. Sure, I bought some, but honestly I preferred Richie Rich and Archie to Superman and the like. I don't know why, it's just one of those boy rites of passage I skipped (like baseball cards, or sports in general, for that matter.) But somehow, even though this show is before my time really, I have fond memories of seeing this on reruns somewhere, so it was a blast to watch this disc all these years later.

Watching now, I guess what I like about it is it just doesn't take itself too seriously. The dialog is flat out ridiculous, with plenty of pompous sounding alliteration, both on the part of Spiderman and his foes. Speaking of, the enemies are pretty silly too. I saw Vulture Man, though I'm not exactly sure how controlling birds, even if they all were vultures was supposed to be worth the TWO MILLION DOLLARS he extorted from the city. Was he going to have them poop on people's cars or something?

And I love the fact that Vulture Man wanted two one million dollar bills. Luckily, the mayor just happened to have a couple handy. 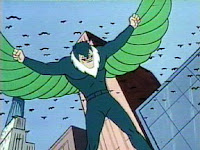 The animation is pretty sad, typical of late 60's animated television, which only adds to the charm. I made a game out of playing count the recycled animations. Not only is there plenty of recycling, there's also some just bizarre drawing on display. Each episode has at least one reaction shot that has the human face doing things it could not do unless it was made of rubber. 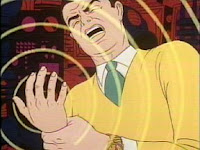 That, to me, is part of the charm of these 'toons. The comic industry just takes itself too serious anymore. Sure, these were cheap and weird, but they were designed to be disposable entertainment for children, not something for grown men who still live with mom to obsess over.

I didn't know it, but I guess all these are out as a DVD set for the reasonable price of about $45. Personally, I don't think I need that much Spiderman '67, but if you do, there it is. CED Magic's page on Spiderman on CED has more info specifically on what I have here and is where I ganked these images from. (Sorry Tom.)

One other thing, I'd be remiss if I failed to mention the excellent library music used throughout the Spiderman 'toons. Neat article about that at WFMU's Beware of the Blog. Fortunately some fans have done the sleuthing to put together a compilation of some of the tunes and you can check out that comp here. (Better quality comp here and here. Download both parts and unzip.)
at 12:28 PM

Look fine to me. What's the issue?

You can see them, because you have them cached. They look like red x's to everyone else. Host them on blogger or image shack.