You know Donnie & Marie Osmond were on the way down in 1978 when Goin' Coconuts starts with the two supposedly in concert on a totally empty stage with no audience. Not only did they cheap out on scenery, but it would appear to me they borrowed the plot from the Brady Bunch or Scooby-Doo.

See, Donnie and Marie, along with their stereotypical manager, are on their way to Hawaii to play a show. In the airport a fake priest hands Marie a necklace which immediately attracts the attention of a dozen stereotypical baddies. About five hours into the movie, we learn the necklace is actually a decoder for this treasure map leading to a sunken submarine (!) with gold bars. Of course, by this time, we've already figured that out as subtlety is not this movie's strong point.

Along the way, there are many "wacky" and/or "madcap" chases. Of course it takes about half the film's running time before our heroes realize they're being chased. Those stereotypical baddies? Well, we have a Strangeglove-esque German (who would have been a million times better if Charles Nelson Riley played him) and a few Fu Man Chu generic Orientals. And Lurch. Yes, Ted Cassidy is the only other recognizable person in this film.

There are lots of jokes about teeth. Y'see, the Osmonds have really big teeth. I mean huge. Like, freakishly large and white. We're also treated to many scenes of Donnie being a playboy. Though his star fading at this time, I guess it's still possible that he'd get the Beatles treatment. Poor Marie though is treated like the virginal kid sister throughout.

The problem here is Goin' Coconuts falls into the category of films not bad enough to be good but also too bad to be good. There are a few good moments (like this classic reaction shot) but for the most part the movie just kind of drags. 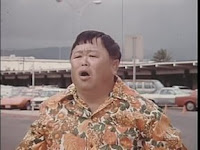 This disc, from EastWest, is slightly less crap than their normal fare. It appears to be taken from an actual film source as opposed to their normal technique of using crusty old ex-rental VHS tapes. Of course, the print is less than pristine and is compressed to all hell so you get some massive macroblocking anytime there's motion or any complexity in the image. For a dollar, you expect it.

As always, the legality of this release is highly questionable. There's also a second feature "Lost on Paradise Island" that I haven't gotten into yet.

I did PA for a Marie Osmond show a while back. She was awesome and really sweet.