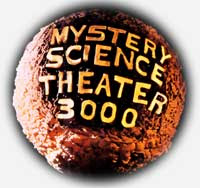 It should come as no shock to anyone reading this blog that I love MST3K (or Mystery Science Theater 3000, to be exact.) However, the show has been off the air for years. The only way to watch it anymore is either through the beauty of tape trading/file sharing or the DVDs and videos Rhino has released.

Despite feeling they are a bit pricey and sometimes a little carelessly assembled, I do genuinely appreciate the Rhino releases. Recently, I've become a little concerned about the future of MST3K at retail. I'm not going to claim it's all over for the cowtown puppet show, but I do have to wonder if we're seeing the beginning of the end.

Part of the problem is licensing. See, MST3K has got to be the most difficult TV show in terms of rights and licensing anyone ever could have created. Since each episode encompassed an entire movie, the broadcast rights for that movie would have to be secured and renewed to keep that episode on the air. If Rhino wanted to release that episode, additional rights needed to be secured.

Rhino has been an excellent home for MST3K if for no other reason than they already have the rights to a lot of movies featured on the show. The problem is, over time those rights expire and if the owners of the film chose not to renew, that episode would go out of print.

This first happened in the VHS days with Amazing Colossal Man being the first episode orphaned. No real surprise, considering that movie and it's sequel War of the Colossal Beast (also featured in MST3K) have been embroiled in rights tangles for years. Next to go was another single episode release, The Beginning of the End, which went out of print when the rights to the movie went over to Image early last year.

Though there was a considerable gap of time between those first two casualties, the deletions have been fast and furious since. In the last year, Rhino lost the rights to all four films on the Vol. 1 set and Sidehackers for Vol. 3 (orphaning three other discs in the process.) Vol. 10 was pulled almost as fast as it was released (though we still don't know why, the assumption being Godzilla vs. Megalon wasn't licensed properly to begin with) and a few weeks ago fans discovered Vol. 9 is MIA as well.

If these were all older releases, it wouldn't be so shocking, but the fact of the matter is, the two most recently released MST3K sets are out of print, one within weeks of hitting the shelves. I've also noticed the release date for Vol. 11 keeps getting pushed further and further and still no titles leaked. One has to wonder what the heck is going on at Rhino.

The other problem is stores just aren't stocking these things any more. I recently spoke to someone at Best Buy and he told me he didn't think they were carrying any MST3K discs anymore. Despite all the shelf space they're giving to TV on DVD, apparently they can't spare any room for MST3K. It's a similar situation at the other box boxes out here. Cult releases, like MST3K, are getting pushed out for more room for triple dips of Hollywood's latest CGI-fest.

With rights vanishing along with self space, I have to wonder what the future holds for MST3K on DVD. Even at best, these can't be huge sellers anyway. With dwindling retail placement and nightmarish licensing, releasing these things can't be much more than a labor of love. I just have to wonder how much longer Rhino is going to feel that love.

Update 3/19: Looks like I Accuse My Parents may have slipped over to the land beyond. Good luck trying to score a copy, all the sellers on half.com and Amazon appear to be "warehouse" sellers who list tons of crap they don't actually have on hand. If this is truly OOP, I don't exactly know why...
at 11:07 AM

It wouldn't surprise me to learn that Best Buy not carrying them is linked to those sets not selling due their high prices. I don't know if it's Rhino's or Best Buy's fault, but I've noticed that each set costs more than the last one did. Rhino does deserve blame for abandoning the standalone MST3K DVDs, which were more appealing to MST3K fans without a lot of cash to blow.

I'm surprised that more DVD companies aren't trying to get the rights to movies used on MST3K so they can release a regular DVD first and then sublicense the movie to Rhino for more money.

Oh, and I've heard that the Image DVD of BEGINNING OF THE END edited out/digitally tinkered with some of the grasshopper scenes in an attempt to "make the movie look better."

Yeah, I think the standalone discs were great. I guess I wouldn't mind the sets so much if there was rhyme or reason to the way they were assembled. It always seems so random.

I know back in the day there was a peculiar Catch 22 with regards to licensing fees. Many movies were thought to be worthless and licensed cheaply to Best Brains, which was part of the reason BB picked them. Then, once the MST3K episode ran, the movies were seen to have value and they licensor jacked up the licensing fees. This led to several episodes falling out of rerun rotation. I'm sure some of these people are still holding out for unreasonable sums of money and that's what's keeping some episodes from appearing.

I can't believe anyone (other than Wade Williams) would tinker with Beginning. The really funny thing is, if they just show it in it's correct aspect ratio (matted vs. the open frame of the Rhino version) it cuts out several gaffs like the infamous grasshopper walking on the sky shot. The ineptness is part of the charm of Mr. BIG's body of work. Say what you will, the man is never less than entertaining.

Oh yeah, I know about/agree with you about the whole Catch 22 thing (It wouldn't surprise me if that's holding back some episodes now). One of my favorite moments in the Amazing Collossal Episode Guide was when they talked about how the rightsholders for RADAR SECRET SERVICE originally refused to have anything to do with them and then came crawling back to Best Brains years later.

It also doesn't help MST3K's situation that many of the old episodes used movies that were wrongly believed to be in the public domain (The Mexican stuff, the Godzilla movies) or were flat-out licensed incorrectly (THE BLOOD WATERS OF DR. Z, the FVI stuff). I can't blame the rights holders for being angry, but I think it's foolish to pass up the guaranteed sales from the MST3K fanbase.

Then there's the issue of Sandy Frank's stuff (allegedly) having their contracts run out, so one would have to track down the films' rightsholders and whoever owns the Sandy Frank dub tracks (There's argument over if Frank still has the rights or if the rights to the tracks reverted to the foreign companies).

Rhino probably burned a big bridge with Toho over the GODZILLA VS. MEGALON fiasco, so I doubt we'll be seeing either of the Godzilla episodes any time soon.

When you factor in all of that and the fact that TV rights cost less than video rights (plus Rhino's alleged cheapness/focus on PD stuff), it's no wonder that the Rhino collections seem like a random collection of episodes-that's precisely what they are.

I'm shocked that the FUTURE WAR episode hasn't gotten released yet. I'm sure that Cine Excel would love to get some more money off that title and didn't have any qualms about licensing it to the Universal Music Group and the other company (companies?) whose name escapes me that did the cheap DVDs of it. Unless those DVDs weren't licensed...gyahh, what a headache!

Phew, I'm damned glad that I've picked all these sets up the day of their release! It's pretty crazy how the last two have gone OOP so fast, but as you said, the rights issues with the series are Rhino's biggest problem. Too bad the whole copyright probs couldn't be worked out. If that ever happened, then they could probably release the series by Seasons. (Ah... a nice dream...)

As for Volume 11, the tentative release date is June 26th and these episodes will be on the DVD:

While the price of these sets has always been an issue, I have no problem with forking out the dough, and I doubt that Rhino is really losing money on this venture. MST3K has a hardcore fanbase even after its cacellation, so I doubt that they'll be in the red if they keep cranking out these sets.

On a side note, Volume 1 is coming back into print as is Volume 3. Keep an eye out for those!

And the MST3K crew is going back to their roots with a new show called THE FILM CREW that is pretty much MST3K without the bots and the SOL. The first film they're mocking is "Hollywood After Dark" and that'll be out in July!

How do I know all of this you may be wondering? Because I check out Satellite News every single day and you can too. Just go here: http://www.mst3kinfo.com/

Keep up the awesome work here on Calcinator Death Ray by the by. I enjoy your reviews and hope to see you crank some more out soon! Take care!