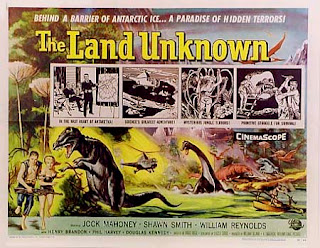 The last DVD I looked at was The Deadly Mantis, a Universal sci-fi flick that managed to get a lot wrong. So today I'm going to talk about The Land Beyond, another late 50s Universal sci-fi that manages to get closer to right. Mind you, it's not a great movie, but if you're a fan of 50s sci-fi/giant monster flicks, you're going to enjoy this one.

I'm not going to lie to you and say this is some mold breaking sci-fi work. It's not. As usual, we have the reporter lady Maggie tagging along with the scientist/military guys on an expedition. This time they're going to the South Pole for reasons I missed. Their helicopter is clipped by what looks to the audience to be a pterodactyl and they are forced to land in a balmy crater well below sea level.

Exploring the terrain proves they're not in Kansas anymore. Our leader Hal quickly surmises they're in the mesozoic period, a fact which everyone seems nonchalant about. Maggie's clothes start to fall apart (though in one scene, her sleeves magically reappear, then dissapear) and the group discovers the survivor from a previous mission who's magical conch shell sounds like the Stan Kenton horn section and keeps the dinosaurs away. He and Hal fight over Maggie while the guys try to find the parts to fix their helicopter.

What helps here is the actors aren't entirely incompetent and the effects are actually pretty good. The t-rex is a suit with a big old animated head. Kind of cool. Not the best, but neat enough. The sets are pretty decent though. You can tell it's a sound stage, but at least they tried.

Interesting that you can tell they put some money in to this, they even went so far as to film in Cinemascope, but they didn't go so far as to use color film. Granted, that wouldn't have changed the fact that this is still a pretty silly movie, but it might have give it a touch of class over the other B-movie sci-fi of the day.

WTF's disc is letterboxed and looks good. Crisp image, good blacks, etc. (By contrast, I have a Cryptflicks disc of this that's almost gray and white.) You also get the trailer, an image gallery (short as it is) and an easter egg with Italian opening credits. The only beef I have is the menu is a little wonky. All the items are accessable, but the direction buttons don't go the way you'd expect them to.

Good stuff here. Fun movie, not a great one, but if you're into the genre and ready to dig a little deeper, you could do a lot worse than The Land Beyond.

From what I understand, this was actually supposed to be in color, but was a victim of budget cuts and got shot in B&W.

I've heard rumors that the T-Rex head was altered and used as the head of "Spot" on THE MUNSTERS. I've also heard a rumor that the MST3K gang was slated to do this during the Sci-Fi years, but bailed out since the movie was so boring. Supposedly, a partially completed comments script still exists somewhere at Best Brains.