I've found some pictures of my Florida booty. See, one of the things we always do in Florida is hit the Fossil outlet store. That, the Adidas outlet store and the Friends of the Florida Library store are the only kind of shopping I want to do on vacation. The Adidas store turned up nothing and I had a small score at the library store, but the watches were where it was at this time.

Why Fossil? Well, they're cheap enough to be something you can own a bunch of and not feel bad (like Swatches) and the outlet store makes that even more so. I got all three of these watches for the same as the tag price of the cheapest one. Plus, they're well made and pretty cool from a design stand point (though there are some you couldn't pay me to wear.)

OK, so on with the show.

This first one is kind of a replacement for one I got last time. See, I love the old Pulsar LED, and what geek wouldn't? I just don't know if I can justify paying eBay prices for one. Luckily, Fossil makes several LED watches that mimic the style of the old ones at a fraction of the cost. (And yes, they're true LEDs, not back lit LCD displays like the recent reissues of all the great Mattel handheld sports games. If I've lost you already, you better move on as this entry is only going to get geekier from here on out.) 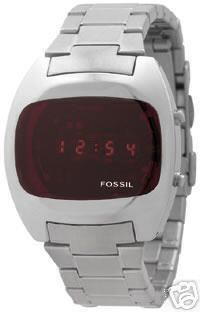 Not quite a Pulsar, but I dig it none the less. My old one has a green crystal and a less solid, more rounded band. The problem with it was the date function went a little wonky. Not a huge deal, and so far the only problem I've had with any of the dozen or so Fossils I own. Still, I hope to get a little more out of this one.

Now, to the really cool stuff. I was hoping to find this one at the outlet as I knew it'd been out a while and I didn't feel like paying the $130 it originally retailed for. Check this out: 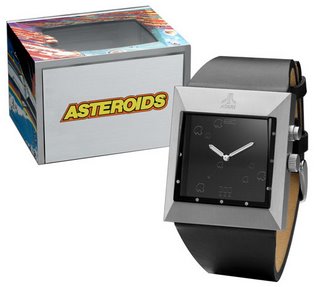 That one I was looking for, but this one jumped out and grabbed me: 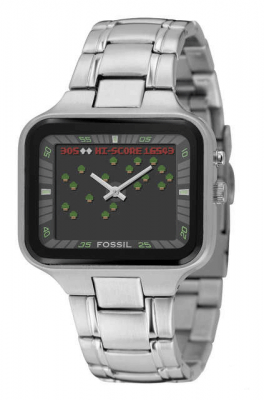 The answer to the big question is, no, you can't play them. They do have a very neat attract screen type animation that is pretty fun to watch. The Asteroids one is the big old deluxe model with an engraved limited edition number and everything. (Of course, I'm shamelessly obliterating any value by wearing it to work today. MUHAHAHAHAAA!!!)

I guess there's also a Breakout model available, but I didn't see it. I kept hoping to find a Missile Command watch as that would look so nice while I'm playing this: 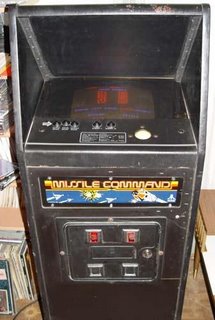 (No, that didn't come from Florida, I'm just bragging again about the great birthday gift my fiancee got me last year.)

And, in case you were wondering, the best thing I got at the friends of the library store was a VHS of "The Hand Behind the Mouse: The Ub Iwerks Story" which due to Disney's constant stream of direct to video sequels and artificially limited editions hasn't made it to DVD yet. As I've been on quite the early animation kick lately, I'm really looking forward to this.
at 9:19 AM