Miles Davis' Kind of Blue is a pretty amazing album. It was both an important album in the development of jazz music and a commercially successful one, at least in terms of the sales of jazz recordings. It's an album that continues to be revered and continues to sell, two reasons that make a special anniversary set of the album a given, especially in a genre where the labels love to issue the same recordings over and over again.

So, we have Sony's new-ish Kind of Blue 50th Anniversary Set (a year early even, but who's counting?) Just when it seemed like the vaults had been mined to depletion, Sony offers up never before released false starts and studio banter, in addition to the album proper and an additional, previously released, session by this group of musicians (and there was a live set they didn't include for some reason.) There's also a blue vinyl pressing of the album, a new DVD documentary, a 12"x12" hardcover coffee table book and various photos and other odds and ends. 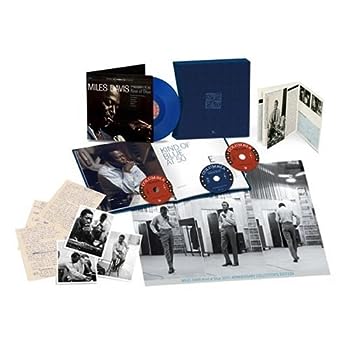 To say the set is a bit obsessive in scope is almost a given. And, if you've been following Sony's series of Miles Davis box set, you know to expect sticker shock to match ($109 list, to be exact.) It's also worth noting, aside from the studio chatter and breakdowns, there isn't any new music here. There's a new documentary on the DVD, but Sony has already announced the CDs and DVD will be available separately.

So, here's my big question: in a time when labels are complaining about no one buying music anymore and how they're losing money, how in the world do they justify such a lavish package for an album in one of the lowest selling genres of music? While I'm not arguing Kind of Blue is worth a super deluxe set, since 1997 this album has been reissued four times I can think of off the top of my head, plus included in a box set and there were at least three audiophile vinyl issues (one on blue wax even!) How much Kind of Blue does one need?

Now prepare to laugh at me because, yes, I bought this set. In my defense, I was able to purchase it at about a 50% discount which is a bit more reasonable price in my eyes. Still expensive, to be sure, but probably closer to what this set should cost than what they're asking.

Is it a nice set? Yes...but, something went seriously wrong in the packaging department at Sony. You have the book, then you have a gatefold LP jacket with the record in the left pocket and the discs tucked in pockets on the right inside. Even under the best circumstances, these discs would get scratched over time, never mind that shipping in such a heavy package pretty much guarantees no one receives a flawless copy.

The record is probably intended more as a novelty item anyway, so I guess I shouldn't be shocked that it's slightly warped. Shame, as it sounds really nice, like they put some care into the mastering.

As for the rest, well, it is what it is: an obsessive look at one of the greatest jazz albums of all time. The music I already had on the Miles & Coltrane set. The documentary was nice, but I don't know how often I'll watch it. Really, the book, with the large pictures, was the best part of the deal. Well, and the record, which had it been a flatter pressing, would have been a real star of this set.

And so it goes. In a time when everyone is crying about their bottom line, Sony brings out an overpriced set with a limited market. On one hand, it's probably the ultimate anti-download, as this is a set as much about having the physical stuff in your hands as it is about the already available music. On the other, this set might be the ultimate "so what" as I can't see how this set gives any further insight to this masterwork that one could have by listening to one of the other currently available CDs and reading Ashley Kahn's Kind of Blue: The Making of the Miles Davis Masterpiece

re: record companies trying to profit off of exorbitant collections - very interesting indeed. perhaps they've given up on the numbers game and are looking further down the long tail to the niche fans with money to burn. 1 mil $10 cd sales vs. 100,000 $100 sales. I guess those numbers may or may not be plausible, but I bet on the average far more miles fans would pay 100 bucks for a release than say, britney spears fans would be.

i guess my point is that they seem to be trying to keep the status quo by shifting their bread and butter market to would-be connoisseurs with deep pockets rather than the unwashed masses.