Our Summer Rides Part 1: The Smart

A few years ago Kristen and I went to Europe. One of the random sites we both enjoyed was the tiny Smart car which was everywhere. There were two models, a more basic people mover which could be parked perpendicular to the curb, and the mini-roadster. We meant to rent one for an afternoon as we figured they'd never bring them out here.

About a year ago a slightly modified version of the fortwo arrived in the US and now we have one. The US version is slightly longer (no crazy parking with this one) so you might have a fighting chance in a collision with an SUV and has a Mitsubishi engine instead of one made by Smart's parent company Mercedes. 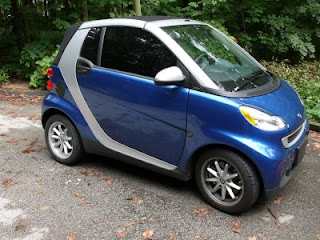 We've had the Smart for a few months now and I think it's safe to say we're both kind of unimpressed. OK, if you want a car to turn heads (for the time being anyway,) you're looking at one. Everywhere we go, we get stopped with dozens of questions about the car. It's kind of annoying, truthfully.

The finish and features on it are very well done. (I think our car has nearly all the options.) The inside is comfortable, even for someone 6'3", though if the seat leaned back my visibility would be greatly improved. You can tell thought went into this vehicle. (Road noise is a bit more than I'd like though.) 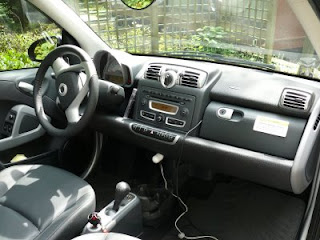 And it does get good gas millage, but not as good as you might think. The Honda Fit gets almost the same MPG and has four seats and something closer to a real trunk. I think the MPG was another thing that was compromised in the trip across the ocean, but I might be mistaken in thinking the foreign ones do better with gas.

While it's fun to drive, it's also a bit quirky. The three cylinder engine isn't going to break any land speed records but it gets the job done. However, I just can't get used to the "auto-manual" transmission. I guess this is supposed to give the benefits of a manual with the convenience of a automatic, but it feels to me like it's shifting and someone in the passenger seat is working the clutch.

Then there's the cost. The Passion Cabriolet (kind of a convertible, but more like a glorified sun roof) we're driving starts at almost $17K. Fully outfitted like ours is, it's closer to $19K. Granted, you can go base model at $11.5K but, as difficult as these are to come by now (22 month waiting list, we were told,) I'm sure any dealer is going to up sell as many extras as they can.

So, the Smart is an interesting little car. Until these are easier to come by, I think anyone interested would be better off checking out the Fit or a Scion. The gas mileage isn't that much worse and you get more car for the money.

The questions we always get asked about the Smart:

Q: What kind of millage does that get?
A: We average in the mid-30s with mostly in town driving.

Q: Is it electric/hybrid?
A: No, standard gas engine.

Q: Can you take that thing on the interstate?
A: Yes, though the acceleration makes merging a bit of a nail biter sometimes.

Q: Can you fit in that?
A: Yes, but I have to watch my head putting the top back.

Great review! I was thinking, however briefly, about the Smart - but I needed more space. Still seems like a great city buggy, good mileage, parallel parking in tight spaces (too bad about the slightly too long length!).

I haven't seen the convertible yet (although my wife did). It does sound like a fun car to drive - but I was surprised at the cost you mention!