I have a love/hate relationship with the Disney corporation. I have a deep love and respect for the company's history, but I absolutely hate the way the modern company pisses all over that legacy. I love the fact that Disney extended health benefits to same-sex partners in a time when it was rather risky to do so, but I am completely repulsed by the way Disney's lawyers keep getting copyright laws rewritten to favor Disney.

I could go on like this all day, but one thing is certain: they still know how to run a theme park. (Of course, that whole love/hate thing pops up again, but I'm getting ahead of myself.)

We got back from California a few days ago and before leaving we spent a couple of days at Disneyland. It was my first trip there. About this time last year, we spent a week at Disney World in Florida, which was a return trip for me.

It was pretty cool to me to check the differences between the two. One might assume that they were simply East and West versions of the same thing. Well, yes and no. For a number of reasons, the parks are similar, but not identical. 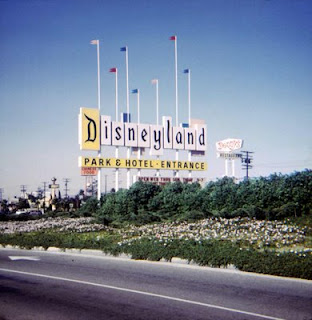 Two of my favorite retro signs together, Disneyland and Denny's.

Walt Disney World was an attempt to correct a major flaw of Disneyland: limited space. As Disneyland grew in popularity, other businesses moved in around it. The Magic Kingdom is much more spread out than Disneyland and several of the signature landmarks (the princess castles, Space Mountain) are noticeably larger in Florida.

On the other hand, I'm pretty sure I read somewhere that Disneyland was still thought of as the definitive Disney park and the rides in California reflected this fact. Even if this isn't true, that's how it seemed to me for the most part.

Unfortunately, we only got to ride two of my top four favorite rides. Pirates of the Caribbean is definitely better in California (even if all the skeleton stuff happens at the beginning of the ride, which doesn't make much sense to me) with a second drop and a whole scene missing in Florida (plus they still have "We wants the redhead!"). And, after about 27 times through, I had to admit, the completely different Disneyland Space Mountain trumps the one on the other coast.

While I appreciate times change and some of the rides are woefully outdated (Mission to Mars, anyone?) it's really not necessary to get rid of things that still work. And while the changes made to Pirates probably make it a better ride, the injecting of new characters and licenses into things "just because" drives me nuts. I noticed a lot less of that at Disneyland and found myself spending a lot less time sulking over changes than I did in the Magic Kingdom. (I'm still kind of nervous about what they're doing to It's a Small World though. Yes, I really like that ride in all it's Mary Blair/'64 World's Fair glory.)

While Disneyland itself might not be as impressive in scope, I found the rides to be better and less tampered with than those at the Magic Kingdom. On the other hand, Disneyland only boasts the California Adventure as a second gate while Walt Disney World adds Epcot (which was more impressive in the 80s,) Disney/MGM Studios*, the water park, Animal Kingdom and the resorts.

If I had to chose one over the other, it would easily be Disneyland. I have to admit, by day three I was starting to feel like we'd done it all (going at off peak time rocks.) Disneyland is somewhere to go on vacation while Disney World is a vacation in itself. However, we ended up with annual passes so we'll be back.


*sidenote: the Florida Tower of Terror blows the Cali one away. Both are fun, but you can tell the Disney/MGM Studios version was put up before they came to their senses and realized it was maybe too complicated of an attraction to run stably. Still, the differences are huge and I'd risk having the ride not running to get the superior expirence.
at 6:24 PM

Hi. I don't like Obama either, but I think Clinton would be a stronger candidate. Obama is just too green for most except the most naive.

Since you're a publisher now, I thought I would point out that you wrote:

When you are indicating possession, as in "its history", just use the word "its".

I know that seems weird because we say that a car belonging to John is John's car.

But it's the truth!

Gaah! That's one of the mistakes that bugs me the most and there I went and made it. Oh well, no one but me proofreads this and I was suffering some jet-lag when I wrote. Thanks for the heads up. :)