Music To Assemble Ikea Furniture By

The last couple of nights I've been putting together a bunch of Ikea furniture so I loaded up the CD player with some Mosaic sets I've been meaning to spend some time with. If you don't know, Mosaic is a small jazz specialist label who do primarily high end box sets centered around a complete segment of an artist's work.

Their big boxes are pretty neat. They have a consistent look and bring together a lot of hard to find material. They're also highly collectible so the sting of the cost of admission is tempered by the fact that everything they've put out has gone up in value, if you care about such things. I've been real lucky that I've found most of mine really cheap. I've only paid collector's price once and managed to buy another on sale.

Of course, when they started out, the music was much harder to get than it is now. A growing criticism about Mosaic is that much of the music in their sets gets reissued by the licensing labels once the Mosaic set goes out of print. For instance, I'm pretty sure almost everything in the Jackie McLean Complete Blue Note 1964-66 Sessions set (which was the second Mosaic I bought) is available through Blue Note at a much cheaper cost. But, people still like the Mosaic sets as they generally have great liner notes and lots of cool pictures.

Recently Mosaic has created a second line of smaller sets called Mosaic Select and this was what I started with. Specifically, it was the Duke Pearson set. The Select series has been a bit controversial as the stuff contained in these sets hasn't been as hard to find. The Pearson set is a good example of this as I think one could assemble this set with a combination of domestic and Japanese Blue Note discs, but if you don't want to import, this is a cheaper alternative.

Anyway, Duke Pearson was a pianist who ended up as an A&R, house arranger and kind of all round go to guy at Blue Note in the 60s. This set focused on his last batch of sessions for the label in the late 60s. If you know anything about Blue Note, you know this was a transitional period for the label (and jazz itself.) These recordings have a commercial bend, to be sure, but I think there's some gems in there.

Specifically, the first session which came out on LP as "The Phantom" is a keeper. It's also been recently reissued domestically on Water Records. Bobby Hutcherson, who is maybe my favorite vibe player, adds a lot to these soulful bossa nova tunes. Duke must have been really feeling the Latin vibe as pretty much all the stuff on the first two discs continues in this groove. As a comparison, it's kind of like a stripped down version of some of what CTI was doing at the same time. It's maybe a little lightweight, but I dug it.

However, the third disc tripped me up. It ends with "Merry Old Soul" a Christmas album. This actually sounded kind of cool, but I'm just not ready for Christmas music yet. But, prior to that, is a session with a chorus that is straight up old school dentist office music. I really wanted to find something to like on this stuff, but it was way too easy listening for me to dig.

My recomendation would be for someone to get the reissue of "The Phantom" and pass on the whole set unless you can hear some samples first. This is not going to be everyone's bag and while I'm glad to have it in the collection, it's pretty non-essential stuff. 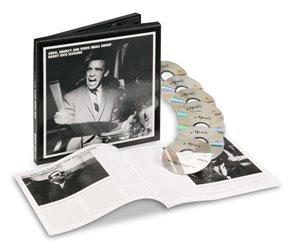 The bulk of my furnature building was done to the Classic Argo, Emarcy and Verve Small Group Buddy Rich Sessions. This was the one I actually bought new. Most of this stuff is hard to come by as little of it has been released on CD domestically. Plus, there's an entire unreleased session of about an album's worth of material.

This stuff is really interesting to me. It's squarely between two big band periods for Rich. During this time, Buddy was kind of in flux, even giving up drums to become a song and dance man for a while. What's really interesting about this set is hearing how good an accompanist he could be when he wanted to. As he was trying to downplay the drumming, there's not a ton of fireworks here. Just Buddy grooving behind some great musicians. (Not to worry though, he does whip out a solo often enough that you don't ever forget whose name is on the label.)

For my money, the best stuff in this set is on the last four discs when Buddy has a working group going with vibe man Mike Mainieri. What possessed Rich to put together a front line with vibes and flute, I'll never know, but it works. And you'd think it would be all lightweight west coast stuff, but there's some fire here.

I also really like the live set that kicks off disc four. Flip Phillips is a player I'm not terribly familiar with, but he really steals the show there. The first three discs are quality as well. Lots of Basie alumni and lots of Basie tunes. Nothing wrong with it at all, but I just think the later stuff with Buddy's working group, as opposed to the people thrown together for the session, is more interesting.

To be sure, for someone who only listens to Buddy Rich for the drum solos, I'd say avoid this and stick with the 60s and 70s big band stuff. If you dig the 50s Verve stuff and mainstream early 60s jazz, I'd say this is a good set to pick up. Plus, if you're the kind of person who thinks Buddy overplays, I think you'll be surprised.

Speaking of overplaying, I batted cleanup with the Stan Kenton Complete Holman/Russo Charts. This set holds the distinction of being the one I paid the least for. (And I mean a ridiculously low amount, less than the cost of a single CD.) It's also the one that I don't think I'm ever going to really get into.

See, I can appreciate arrangers. I can appreciate the idea of arranger's bands. I dig Gil Evans, for instance. I think I just don't like the Kenton style. It's too loud, to brassy, not swinging enough for me. Frankly, a lot of this set sounded like mediocre soundtrack material. Then there were some vocal sides that were just corny.

So, anyway, if you like the idea of jazz played by a marching band, maybe you should seek this one out. I don't think I'll be putting this one back in the player any time soon, if ever.

And, in case you were wondering, I got a new computer desk and a dresser that is going to be perfect for CD storage. I like Ikea stuff, but their store freaks me out.
at 10:16 PM