Own a piece of Arch Hall Jr. history...

Do you have Twist Fever?

You too can sing the beautiful strains of "Vickie" lounging by the pool with Bud Eagle's 1960 Jazzmaster. (Richard Kiel not included.)

Interestingly enough, this leads me into a double barrel review. I recently got the Wild Guitar/The Choppers double feature from Something Weird and the Wild Guitar CD from Norton. Arch could actually play guitar and, even though he had some sappy stuff in his movies, the tape of him and the Archers playing at a drive-in is pretty rocking. Apparently he was a big fan of Albert King and Johnny Otis.

In the liner notes, he mentioned getting an endorsement deal with Fender for the Wild Guitar and they pretty much forced him into a Jazzmaster. Maybe this is the same one. Sure looks like it. (Yeah, I know he's got a Tele on the album cover. Sue me.) 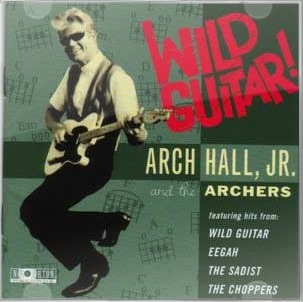 Also got the Wild Guitar/Choppers double. I had Wild Guitar on an inspired dollar store DVD paired with The Beatniks. Needless to say, the quality on this is a million times better, plus you get all the extras Something Weird is known for.

As for the films, I really dig 'em. Wild Guitar is a "country bumpkin moves to big city to be a star" story but it's done really well. Yeah, Arch is sickeningly "Gee wiz!" through out, but his dad(!) and Ray Dennis Steckler are great as sleazy music industry rollers who lock Arch's Bud Eagle into a financial straight jacket where he has to be essentially a trained monkey. (And you thought that stuff didn't happen until Steve Albini wrote about it.)

The Choppers is a short JD picture. Shot several years before it was released, Arch looks about 12 in it. In this one, Arch plays a look out for a gang of car strippers. It's a fairly simple story, they get caught, people die, the survivors go to jail. The End. Oh, the greasy fat guy from Attack of the Giant Leeches is in there. That's a plus. 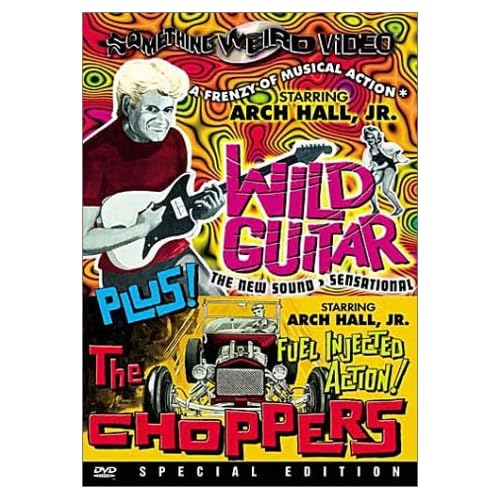 So, there it is. For some strange reasons, I'd claim being an Arch Hall fan. Yeah, he got knocked around on Mystery Science Theater, but he's got some kind of goofy charm I just can't put my finger on. You can get most of his movies cheap on public domain issues, well worth whatever you invest in them.
at 12:54 PM