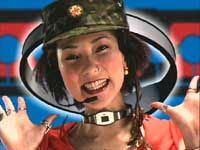 Ok, here's one messed up film I'd be willing to lay money on never seeing a US release. (Of course, at this point the film is almost 7 years old, which might have something to do with that as well.) Battle Royale doesn't have so much in the way of plot. Basically, the youth are out of control so to apparently scare them straight, the Battle Royale law is enacted. Every year, one seventh grade class is dropped on an abandoned island, given weapons and supplies and the last person standing gets to return to society. Of course, if after three days there isn't a winner, the monitoring necklaces everyone wears explode.

That's pretty much it. Teenagers going after each other with guns, grenades (tucked in severed heads) and sickles. Hmm...wonder why no one has picked this one up?*

So, what does Battle Royale offer other than violence, gore, etc.? I took this film as a black comedy parodying high school. All the stereotypes play themselves out in various deadly manners. Yes, the characters seem melodramatic at times, but teenagers can be melodramatic. Even though most of the relationships are told in flashbacks, it's interesting to see how the alliances form and break and how many kids profess love for someone who has just unloaded a clip into their stomach.

I suppose there's also a commentary in there about losing innocence or something, but it kind of gets muddied in the episodic nature of the film.

Now, we do end up with the traditional triad of a hero, his girl and a friend, but I don't feel I can really say too much more without going into spoiler territory. Let's just say there is a traditional story going on here, but if you've watched more than, oh, I don't know, three movies, you'll probably figure out how things are going to end up by the end of the film. I just don't think the characters are entirely the point here.

So, how was it? I dug it, but it's kind of a turn your mind off and just watch sort of thing. The imagery is very powerful and there are some really tense, exciting scenes. In particular, Kiriyama, who is a ringer brought in to fix the game, is particularly fun, in a sadistic sort of way as is Mitsuko, who I gather is either a spoiled rich girl or some kind of loner. (Having 42 characters in the film doesn't leave too much time for character development.)

This disc, an English one from Tartan Asia Extreme, is one of the approximately 3,847 DVD releases of Battle Royale, non-US, of course. This is the regular cut of the movie, not the extended director's cut, which I've yet to determine if I'm missing out on not seeing. The image is soft and PAL so there's a slight speed up and you need equipment to play back PAL discs. The subtitles are fairly good, but they're burnt on, which is always kind of a bummer. Hardly a reference quality disc, but it's also a lot cheaper than the "progressive scan" version which is out of print. There's also a dirt cheap Hong Kong version, but that one is not anamorphic.

If you've read this far, I'd say you should probably snag a copy of this film which ever version you can find. It's certainly entertaining and if you can handle some over the top, black comedy based on a premise that would likely offend most of America, this is a decent way to spend an afternoon.

And who doesn't like Japanese school girls with automatic weapons?

Fun fact: this is the from same director that did the Green Slime.

* the other side of the story is Toei wants an unreasonably large amount of money for the US rights. *shrug*
at 4:11 PM

Yeah, I've heard that Toei's been rejecting all offers from American companies, hence it not getting released here. Some company (whose name I can't place) was able to license the manga version for American distribution. I think they got into legal trouble since one of the stories featured underage sex, and, well, I think you can guess the rest.

Hey, is it snowing on your street, too? Did you hear about the colts?

Battle Royale is brilliant, one of my all time top ten movies.

The Movie Blog reported a while ago that an american remake is in development.