Working out Grief through Cratedigging

My grandfather passed away earlier this week. While I'll probably try to collect some thoughts later on about that, the day of the wake I took my mind off things for a while by doing some cratedigging. Here's what I came up with:

Interesting jazz(ish) stash here. From the back: Willis Jackson "Bar Wars" (a record long my "my list"), Paul Horn/Lalo Schifrin "Jazz Suite on the Mass Texts" (which I bought even though I have mp3s someone rapidshared), Bobbi Humphrey "Flute-In" (another from "the list" and another with Idris Muhammad on drums), "Lullaby of Birdland" ("12 Different Interpretations by 12 Modern Arrangers played by 12 exciting Jazz Groups" sounded too good to pass up).

Front row: Red Garland "Rediscovered Masters" (which I've been in a Garland mood, so that was a nice find), Al Hirt/Lalo Schifrin "Latin In The Horn" (I had no idea this existed!) Johnny Nash "I Got Rhythm" (this record has eluded me for too long.) 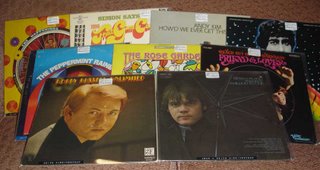 Now this is a fun batch. Apparently these all belonged to Keith Higginbotham (see the label stickers on the covers.) Looks like a nice batch of bubblegum/sunshine pop I love sooooo much!

Back row: The Happenings "Psycle", 1910 Fruit Gum Co. "Simon Says", Andy Kim "How'd We Ever Get This Way" and "Rainbow Ride" (one of these is supposed to be brilliant...I think.)

Middle set: The Peppermint Rainbow "Will You Be Staying After Sunday", The Rose Garden, Lover & Friend "Reach Out Of The Darkness".

Then there was Spirit "Spirit of '76" and a German pressing of "Dr. Byrds & Mr. Hyde" which was a destiny find as I'd has "This Wheel's On Fire" running though my head all that day. 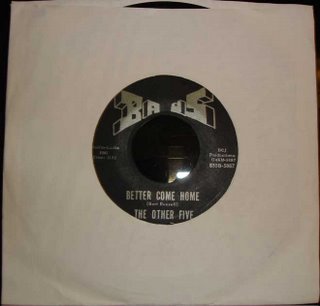 Finally, this was the capper for me. Obscure Muncie garage band The Other Five. The top side is a Bert Russell tune which sounds kinda like Son of Hang On Sloopy. There's horns and everything, so someone put some money into this. The flip is an interesting arrangement of the Kink's "You Really Got Me." Great Nuggets style 7" and probably worth several times what I paid.

The cats aren't so impressed with the current stash though. They can't decide if they want to hear Sergio Mendes or perhaps something from my Command records library buried further in the stack. 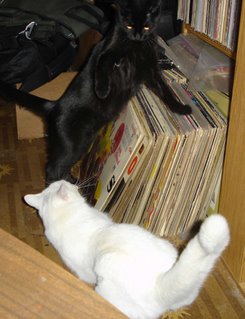 packratshow said...
This comment has been removed by a blog administrator.
7:54 PM