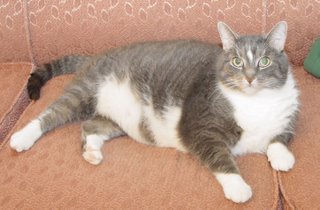 It's hard to understand how Bud could have gone from so healthy like he was in this picture from July to so sick in about three months like he did when everything started. It makes you feel so helpless trying to do everything you can and seeing no change or a change for the worse.

Eventually you reach that point where you know things aren't going to get any better and all you're doing is prolonging the misery. Knowing that doesn't make it any harder to let go.

Bud was a trooper and Bud was a survivor. Three years ago, he came back from hepatic lipidosis caused by a severe urinary tract blockage. I almost lost him, but he rebounded in time. This time, the hepatic lipidosis was symptomatic of a gall bladder blockage and by the time we discovered it, the chances of recovery weren't so good. It started looking like neurological damage was setting in. There was just too much happening, too many unknowns and I couldn't stand to see my friend suffer any longer.

I thought he'd be with me for a long time to come. I really thought we'd beat this. He'd looked so much worse before. While we could have rolled the dice and hoped for the best, the look in his eyes told me it was time to let him go.

It's still not easy. I'm totally cried out*, but that doesn't mean I'm not hurting.

Part of me feels it was too soon to bring not one but two new cats into my life, but the other part of me knows how much easier they are making this period on me and my fiancee. They will never replace Bud and we're not trying to. But, they needed home and we needed cats. Pets are incredible healing and having two little ones running around reminds me of all the good times Bud and I used to have. And that makes me smile.

So, here's Beans and Eliza (names subject to change.) We're glad they came to live with us and while we wish Bud could be here to meet them, we think he'd approve, wherever he is. 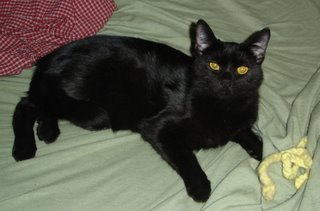 * - later that day I got a call from my dad. My grandfather had an aneurysm burst, fell and is more or less in a coma and probably won't be coming home. When it rains, it pours.
at 10:38 AM

Sorry to hear that - take care.